There is a category of people who are willing to live in a natural environment while having a minimum means of survival. This is some extreme. And yet he will not try this style of life (or game, whatever you like), until now and do not understand all the charm of this way of existence. For example, in our team there are a variety of people: from young (18-19 years old), to adults under 60 years of age who is in “city” life in almost all social niches (students, managers, Directors, etc.). But we were United by the fact that several times a year we get together and plan a General route for a few days and hit the road. The main rule to keep everyone in our group is that the food we produce ourselves. Virtually nothing we take only the most necessary, because the situations are different. So, the ability to forage in the woods or on the pond is the key to survival in a difficult situation. Many people who don’t believe in yourself after such campaigns gain some confidence that the result affects the future life.

Ways to get food in nature a lot. I will try to explain a simple method of extraction (catch) of fish, provided that You have only a great desire to stay with the food, the desire to live, well and growing near the trees (ideally, spruce, pine, etc.). If nearby there are trees you can build a few adaptations, which actually catch the fish. Will tell only one thing — the face. The muzzle is a fishing trap, which in General is a cylindrical grid structure, the neck of which is directed inside. The neck gradually tapering to the base, not reaching to the last 20-30 centimeters. Fish swims into the neck, gradually moves in the direction of the bottom of the structure, passes through the narrow part, and get back no longer able. A person can only pull the face out of the water and collect the catch. Under normal conditions, the bottom of the muzzle reveals that it’s easier to get the fish, but we do face a more primitive type.

So, the first thing you need to cut some young twigs, which are well bent and twist them into a circle. The ends can be linked with finer sticks and catch them in the split. Then, from more thin branches, freeing them from the needles or leaves need to add the circles to each other, so the distance between them was about 30-40 cm to give a density of the design, you can use several thick branches, which fastened by means of thin along round branches. In the result, it should have some semblance of a net of a cylinder whose bottom is also closed with thin branches.

Now make the neckline. For this you need to stick to the ground a few thick sticks to the earth, they formed like a circle with a diameter of about 10 cm, and the tip of their formed circle, comparable to the diameter of our cylinder. After that, thin branches need to tie the sticks to make a net structure. Special accuracy is not required here, the construction had some strength. When the mouth is ready, her thin branches tied to the top of the cylinder, not forgetting to pin and the lower part of the neck in the middle circles of the cylinder. All, a homemade fish trap for fishing ready. Ideally, the face tied with a rope and throw into the water. But, you can do without a rope, just in this case, the muzzle will have to go into the water to get it. Sometimes to get the design out of the water we use and the pole, here it all depends on the situation. Practice shows that such a homemade trap for fish catches is quite enough for her to stay in the water for about 3-10 hours. For those who are interested in the topic of survival, this skill will be interesting and useful, in different parts of the trap below. All the best to You. 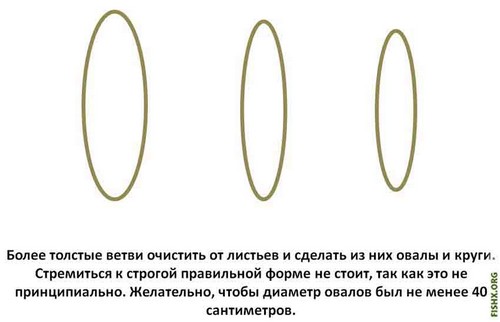 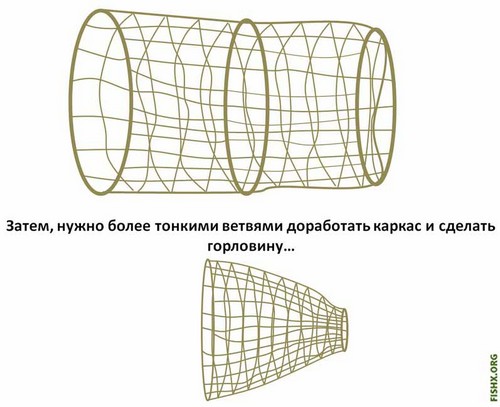 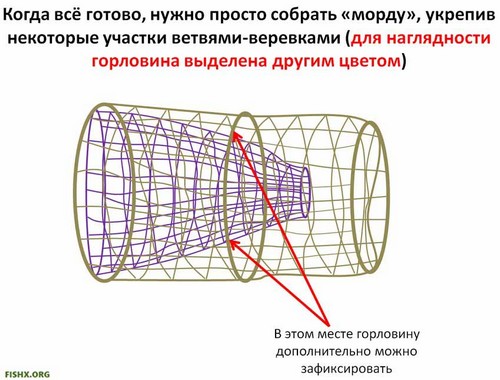