Every year to catch white fish is becoming harder and harder. She becomes more fastidious in their choice, not gaining experience, learning to be more careful. Carp is a very cautious fish to catch it is not an easy task. This snap-in is considered to be heavy, not delicate and tuned to the slightest bite. The reason for this is samopoczucie, which happens hook fish in the lip. 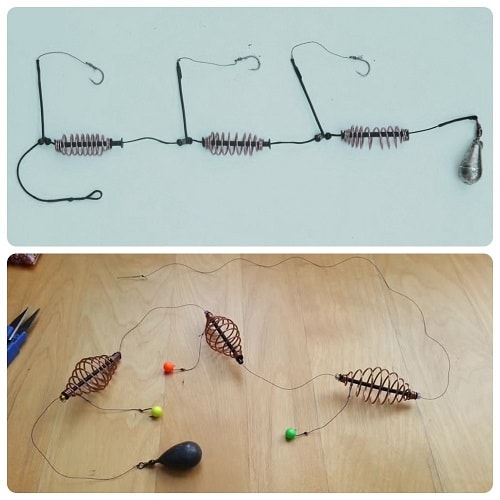 In the standard feeder of the snap are using the same gear, in the form of a trough, the hook, bait and so on. That’s only in “the killer” carp is not used alone, and most of all 3 springs or feeders. When fishing on the feeder each, the slightest bite is transmitted to the rod tip, and curving which informs the fisherman of the bite. In the same gear is exactly the opposite. No matter whether the sensitive tip is on your letterhead.

After 3 feeders will be filled with bait and thrown into the point of fishing, none of the fish will not be able to move it. After swallowing the bait the fish will try to leave, to sail, and so forth, but because of the weight she would not be able to do podscast itself. This is one of the main differences from the classic feeder that is called unsportsmanlike method.

The advantages of the method

As used feeder equipment, then when casting this creates a lot of noise. With that, what more do casts, the more noise it will bring, scaring off the already cautious carp. The same goes for bait balls, where fact does not change. Throwing a “killer” to the point where the gear is delivered filled with several feeders that can reduce the frequency of the casts to a minimum.

The second advantage is the presence of several hooks instead of one. Of course, this significantly increases the chances of a good bite, after all, to stumble upon the bait at depth, in this case, it is much easier.

Plus a third similar to the first, namely is associated with the bait. She is at one point, bringing to this place the fish. Density skarmlivanii in any case will be higher. Even if you have a special rod, it is difficult to make long casts with accuracy up to 30 cm, even a professional, not to mention the beginner.

The disadvantages of the method

Disportionate is one of the major drawbacks. Due to samorodnitsky fish, it is impossible to detect the beginning of the bite. It will only become visible after the fish is already on the hook and begin to bend the tip of the rod. We use several springs, leashes and hooks tackle can easily overlap or get confused. When fishing at night it can create even more problems. Thus in the best case, to force her to unravel and at worst will cease to work at all, if in connection with the zahlest carp are not able to get to the hook with bait.

This method is often in use by young fishermen or beginners. The main positive moment is the good-time Zagorska point of fishing. All this increases the chances of success. To use it or not, only you can decide. If after weighing all the pros and cons want to learn how to build it, then move on to the next stage. 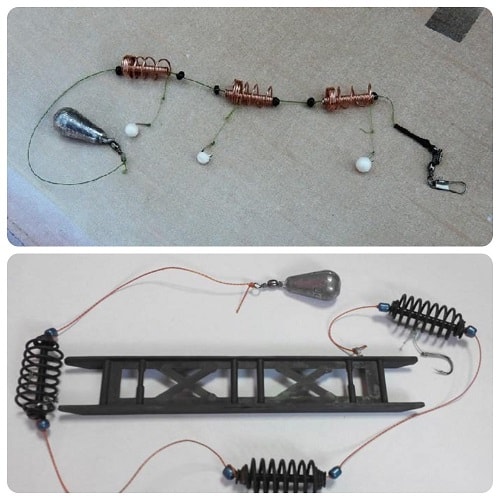 The basis is thick fishing line 0.4 – 0.5 mm, or a thin wire of stainless steel. Still need two or three springs with a diameter of 2 -3 cm, and weight three leash with hooks.Based, on both sides, fasten vertucci. One adjustable weight, the other will serve for attaching the main fishing line. When choosing weights take into account the intensity of the course – you’ll need to lie still on the bottom.

At a distance of 25 – 30cm of the sinker fasten the bird feeder. Using the same distance from the first second. Retreat 40 cm from the second spring and fasten the swivel. In between swivel, springs and sinker, make three of the withdrawal, and attach them to leashes with hooks. Tackle ready.
The basis of this tackle is based on the principle of attracting fish from far distances through the copious amounts of smelling and attractive bait. Therefore, as bait in the spring fills blend that smells and looks, but is not well suited for use in food fish. But the hooks will be a nozzle in the form of a tasty worm.

Bait cook a sticky mass that needs longer is inside the springs and does not leach over. As a flavoring use or purchase ready-made scents, or folk remedies. For example, the carp loves the aroma of garlic and kerosene, but with a large volume of these “spices” in the bait is, it will not, but the worm on the hook will be his reward for coming to the fishing. Tackle checked more than once, and brought a lot of decent copies.

The process of catching the killer carp

As bait, use your favorite compositions, do them with your hands or buy something ready. It is best to experiment, because the fish has become extremely Moody, which is noted by many anglers. Therefore, the use of multiple mixtures will increase the chances of productive fishing. It is worth noting that in the summer for the nozzle on the hook great worm, maggot, bloodworm, peas, barley, bread. As you can see, at this time, working as vegetable or animal bait, can not be said about autumn. Autumn used solely bait of animal origin, such as worm, maggot or bloodworms.

As the number of hooks allows, it is not necessary to stick them all one and the same nozzle type. It is worth experimenting and finding something working. When you find something better just bite carp today, use this as the main bait. By this time, try to change them, throwing a rod once in 10-15 minutes, replacing the pre-bait. On 1 hook to try to impose a “sandwich” of bread and worm, or worm and maggot, and so on.