The Googan Squad Scout Jr. is one of the best-suspending jerkbaits for winter fishing. While the standard jerkbait size models crush fish, there are times when downsizing smaller jerkbaits get more bites. In those situations, there is nothing better than the Googan Sqaud Scout Jr. 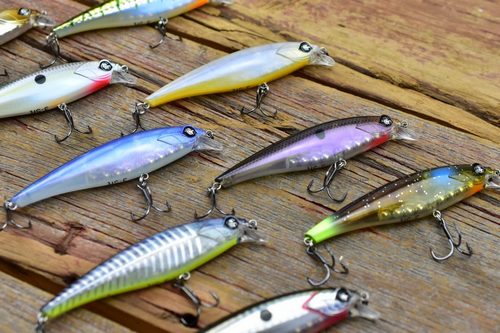 You might catch a lunker bass on the larger jerkbaits during the winter, but that might be the only bite you get all day. I don’t have the patience to fish six to eight hours for one bite, so if bass continue to ignore my bigger jerkbaits, I downsize to smaller models like the Googan Squad Jr. Scout.

When Do You Need To Downsize?

The smaller jerkbaits seem to produce best for me during tough fishing conditions, such as when bass have been hammered with fishing pressure by guys throwing the larger jerkbaits or in gin clear water on a calm day. I also use smaller jerkbaits to “match the hatch” whenever I am fishing around threadfin shad, which are smaller than gizzard shad.

The Bonus Bites Are Always Nice

How To Fish Your Little Jerkbait

The same twitch-twitch-pause I employ for my larger jerkbaits also works with my smaller jerkbaits. However, one difference is that I prefer a sweep-and-pause retrieve with the smaller baits. After cranking the lure down to its maximum diving depth, I pause it for a couple of seconds on a semi-taut line and then slowly sweep my rod a couple of feet so the jerkbait mimics a slow-moving baitfish. I pause the bait again and then use the same retrieve all the way to the boat. Strikes usually occur either when the jerkbait is sitting still or at the start of a sweep.

Having The Right Gear Is Key

The smaller baits are harder to cast on baitcasting equipment so I switch to spinning gear to get the best casting distance. I favor a 6 1/2-foot medium action spinning rod and a 2500 size spinning reel filled with either 8-pound fluorocarbon or monofilament line. Fluorocarbon is my line choice when I want the lure to sink and probe deeper in the coldest water, but I switch to monofilament when I want the jerkbait to suspend or slightly rise in water starting to warm by late winter.