You can’t take and throw a whole fish into the pan, not knowing how much to cook salmon. You must first cut it, because some parts can go for soup, and others for pickling or baking. First of all, you should clean the salmon from the scales, cut off the head, tail and fins that will go to the chowder. Be sure to remove the gills and rinse the carcass under cold water. Next, separate the fillet, which can be salted, and use the ridge with a small amount of pulp for soup. 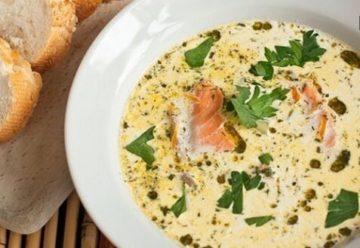 If steaks are needed, then the carcass needs only to be gutted, cleaned and removed. It remains to cut into steaks, the thickness of which should be no more than two centimeters.

Often in recipes they write “languish until it is ready,” without indicating the time. Novice cooks have difficulties, because how long to keep the dish on fire is unclear. When cooking, many people don’t understand how much salmon should be cooked until cooked. Time differs depending on what part of the fish is used: fillet, head and tails, steaks. As a rule, salmon is cooked quickly and does not tolerate a long boil, otherwise porridge will turn out instead of mouth-watering slices.

In the cookbooks, it is often written that you need to cook the soup with fish until cooked in a slow cooker or on the stove, but any part of the carcass can be used. If small pieces of fillet have time to cook in 15-20 minutes and they are added at the end of cooking, then you will have to make a broth from your head in advance.

A whole carcass or its head takes much longer to cook than steaks and slices of fillet. For this reason, it is recommended to put the broth on the fire much earlier than starting to cook the soup. First you need to thoroughly rinse your head and remove the gills, then pour cold water. You can immediately drop bay leaves, a few peas of pepper and other spices. How much is salmon cooked for soup ? The head of the fish should languish for up to one hour, after boiling, foam should be removed.

Approximately the same amount of time takes to prepare the tail, so both products can be sent to the pan simultaneously. You can check the degree of digestion by the pulp – it should have a pleasant peach hue and be easily separated from the seeds.

How much to cook pieces for soup

Fillet cut into small slices is cooked fastest – about 15 minutes. You can’t give the soup much boil or actively stir it with a spoon, otherwise the flesh will turn into porridge. If you use unchained fillet, you need to hold it on medium heat a little longer. You can also check the readiness of salmon for soup by color or pulp.

How much to cook salmon steaks

Cooking time for fish steaks depends on their size. It is advisable to cut the carcass into identical pieces, otherwise some of them may turn out to be raw or boil badly. To understand the cooking time,  you need to pay attention to the thickness. Ideal – about 1-1.5 cm, the steak will be ready in 15-17 minutes after boiling. Slices of 2-2.5 cm in size will have to be cooked for more than 25 minutes, during this time many useful elements will collapse, it is better to cut the fish thinner.

When planning to cook soup according to a new recipe, you need to study not only the list of ingredients and step-by-step cooking. It is worth asking in advance how to cut fish or meat, and also how many minutes to cook.