Any housewife who knows the recipes will be able to make delicious zander in the oven. It is equally important to properly cut the fish so that it does not turn out to be bitter. As additional products, use everything that is at home: potatoes, carrots, bell peppers, tomatoes. The dish will be more juicy if you add creamy sauce, lemon juice or sour cream. How much fish is cooking? It usually takes about 40-50 minutes to bake. To achieve a golden crust, it is recommended to open the foil 5-10 minutes before the end of cooking. 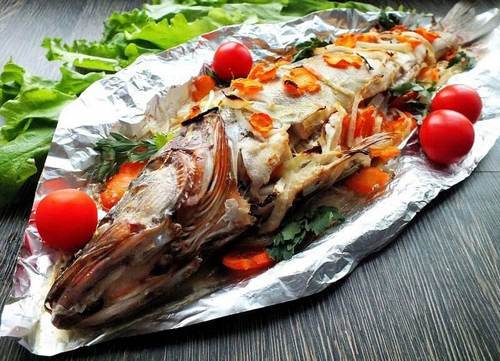 In 99% of cases, the pike perch in the foil in the oven turns out to be tasty and fragrant, however, it is still possible to spoil the dish. This species is considered dietary meat, there is practically no fat in it. If cooked incorrectly, the fish will be dry and bitter. The unpleasant taste is explained by the features of the location of the internal organs. In pikeperch, the liver and gall bladder are located almost at the head itself, so many people damage the gastrointestinal tract of the carcass with a knife during cutting.

Cooking fish in the oven is considered the easiest option, because you practically do not need to control the process. It is only necessary to properly carve the carcass, prepare vegetables and set a certain temperature. Pikeperch in the oven in the foil is a very tasty dish that any housewife can make. It turns out juicy and aromatic, as all the juice remains in the foil. Together with the fish, potatoes and various vegetables are baked, and sour cream and herbs are used as additional products. Suitable for casual or holiday menu.

How to clean fish:

There are 2 options for deliciously preparing zander in the oven: bake whole in sauce or cut into small pieces without bones. The most juicy is a whole fish, but there are several secrets for preparing fillets. For example, use sauces, various additional products and spices. With sour cream or potatoes, the dish is softer and more nutritious.

Different seasonings are suitable for fish in a foil with vegetables, but you should not use a large amount. The taste is easy to kill or even spoil, it is recommended to stop the choice on fresh herbs, lemon or lime. Experienced cooks recommend using parsley or celery root, dill, basil, anise, rosemary or fennel. Perfectly complement the baked zander in foil black or red pepper.

There are many cookbooks where cooks share their fish cooking experiences. There are both traditional and new quick recipes. This is not to say that one of them is better or worse. It is worth paying attention to additional ingredients and relying on your own taste. In baked zander, whole with salt and spices, there are only 85 kcal per 100 grams. It can be included in the menu even during the diet, because the fish contains a huge amount of minerals. 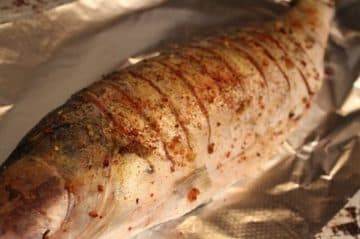 The first recipe is classic, including the simplest foods. They are always at hand, so you can cook even in the country (the main thing is to have a good oven).

Ingredients from the following products:

How to bake whole zander in the oven?

Gutting and washing the fish, no need to cut off the head and tail. Make deep cuts on the carcass before reaching the ridge. Grate with salt and any spices. Cut lemon and tomatoes into thin slices, paste into cuts. Transfer the fish to a baking sheet covered with foil. The remaining tomatoes are mixed with onion chopped in half rings, salt. Squeeze the juice from half a lemon, mix with several tablespoons of mustard and mix well. Grease the resulting mixture with a carcass, place onion with tomatoes and sprigs of greens on top. Pike perch in the oven with vegetables in foil is cooked at 180 degrees for about 45 minutes. Place the pan only in a well-heated oven.

A more interesting dish is a fish in a cream sauce. It is prepared a little harder, but it turns out incredibly tender with a rich aroma.

Ingredients for Fish Baked in Foil:

How to cook pike perch in foil?

Prepare the fish in advance, cut into steaks, grate with salt and generously sprinkle with the juice of one lemon. Peel the onion, chop into rings and spread evenly on the foil (it must first be greased with oil). Squeeze juice from the second lemon, mix with cream and mayonnaise. Put slices on the onion, top with cooked sauce. Cover with foil and bake zander in the oven at 200 degrees for 40 to 50 minutes, depending on the size of the carcass.

Pike perch with sour cream also turns out to be very tender and tasty. It is recommended to choose a low-fat dairy product to make a dietary dish.

You will need the following ingredients:

The types and characteristics of fishing reels

How to cook zander in the oven in foil?

This recipe requires fillets, so you need to completely cut the fish. Gut, cut off the head and tail, chop into medium pieces. Remove large bones, rinse under running water. Finely chop the onion and transfer to a bowl, add sour cream, and sprinkle spices. Throw a pinch of thyme and salt, mix the sauce thoroughly. Cover the baking dish with foil, put the fish and pour the sauce. Stir the pieces so that they are completely in sour cream. Close and send to the preheated oven, bake zander in the oven in foil at 180 degrees. It will take about 50 minutes, 15-20 minutes before the end of cooking, you can open the foil to achieve a golden crust.

Pike perch with potatoes in the oven is a hearty dish that can be safely considered 2 in 1. In an hour, you can immediately cook both a side dish and fish. Vegetables are allowed to choose any, in the recipe indicated only recommended. A small carcass is usually baked whole, large specimens are cut into pieces, and a zander fillet is cooked in onions.

Cooking zander in the oven in foil. Cut fish, rinse and set aside. For the filling, finely chop the onion and fry with sunflower oil. Salt, pepper and add chopped herbs. Cool the mixture a little and stuff the pike perch, if it is cooked whole. When using the fillet, you just need to distribute the onion in an even layer on the meat. Cut the potatoes into 2-4 parts and fry in butter until golden brown. Put the fish on the baking sheet covered with foil, distribute the potatoes on the sides, pour all the sour cream. Pour a couple of pinches of salt and spices, gently mix the potatoes. Cover tightly with another sheet of foil and send to a preheated oven. Bake until cooked at 200 degrees, then open, sprinkle with grated cheese and hold for another 5-7 minutes.