Many do not cook fish soup because they do not like to cut fish. Small copies can be boiled whole, and the finished broth is filtered. From small fish, the stew is rich and very aromatic. 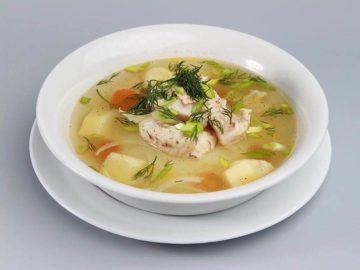 It is not necessary to leave large specimens on the soup, because the ear from small fish is even tastier. In addition, it does not need to be gutted, which means that cooking time is reduced. There are several delicious recipes that every lover of fish dishes should try. For density, you can add a little cereal, for example, barley, rice or millet. In any case, the soup will turn out to be aromatic and rich, if you follow the step-by-step cooking.

Which fish is suitable for fish soup

For cooking fish soup absolutely any size is suitable. Large must be cut into pieces, to separate the head, ridge, tail, and small can be cooked whole without gutting. In the second variant, less time will be required for cooking: small fish cook faster and they do not need to be cooked for a long time.

As for the species, it all depends on the taste and catch, because you need to cook a real fish soup from freshly caught fish on the river bank. It can be carps, perches, hurricanes, crucians. The main thing is that the carcasses should be fresh, from at least 2-3 hours they’ll turn out not to be such a tasty dish. The first of one kind is never cooked, a minimum of 2-3 is required. A rich ear from the little things will be if for 6-7 servings use about 2-2.5 kg of catch.

There was always a real Russian fish soup from small river fish , so you should not take large specimens. It is better to cook on a fire in a pot, but if this is not possible, then you can use the stove. However, there will be no unique haze aroma. As already mentioned, there are many recipes, it is difficult to choose the most delicious.

What is required for cooking

The most popular recipe for fish soup from wheat and vegetables, thanks to which the dish is thick. Some cooks replace millet with rice, but noodles or pasta cannot be used. Pasta does not combine with an ear.

If desired, you should prepare a bunch of greens: onions, parsley, dill. It is customary to add vodka to a real ear for several reasons. Firstly, alcohol makes the fish white, more juicy and piquant in taste. Secondly, vodka acts as an antioxidant, because more often the stew is boiled in nature, took water from the river.

The most unpleasant moment when cooking at home is cleaning and gutting the fish, as everything around will be in scales. All carcasses need to be washed and cut out of the gills, otherwise the ear will turn out terribly bitter. Very small fish can not be gutted, it is better to remove the entrails from medium-sized specimens and rinse again under running water.

Pour the fish with water and put on medium heat, toss the whole onion, cook for 15-20 minutes. Wait for boiling, then salt and be sure to remove the foam. If this is not done, then the broth will be cloudy, and this is unacceptable – the ear should be transparent.

While the fish is cooked, you can do vegetables. Peel potatoes, chop into large cubes, cut carrots with washers. From the finished broth, get the fish and onion, then strain the liquid, since the scales and bones remain in it. Return strained broth to the fire, wait for boiling, toss potatoes with carrots. At the same stage, bay leaves, allspice or other spices should be added.

Rinse millet, pour boiling water and let stand for 5-7 minutes. After the time has passed, send the cereal to the pan to the fish broth and cook for 10-15 minutes. Disassemble the fish with your hands in pieces, removing the bones and the skin with scales. Add slices, simmer ear for another 10 minutes.

Finely chop the fresh herbs, but pour it into your ear for 1-2 minutes before being ready. Many prefer to add directly to the plate. Ready chowder from river fish at home should be infused, but first you need to pour a stack of vodka.

Some fish soup options may be dietary. The calorie content of different fish soup is presented in the table.