There is no exact information on how and when exactly the dish appeared. According to one version, the Italian widow Kachukko soup was first prepared by a widow who lost her husband, a fisherman. The comrades gave the woman everything at hand. The second version – the recipe for the soup belongs to the lighthouse keeper. He was forbidden to fry in oil, as it was used for other purposes, so he was forced to boil seafood. 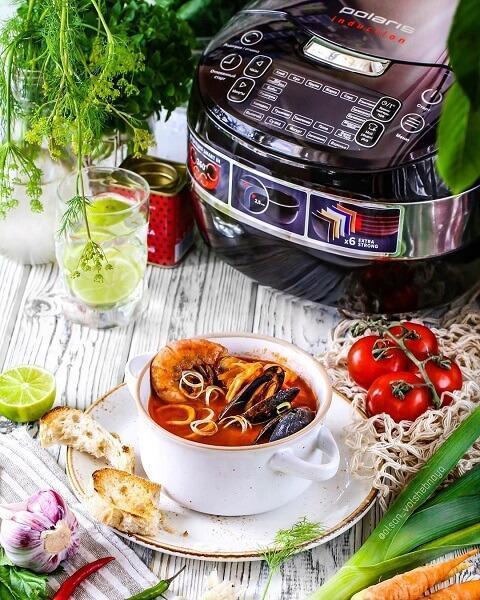 In the port of Livorno (Tuscany) you can catch the Cachucco festival. The gastronomic feast is dedicated to restaurants in Tuscan cities, usually held in June each year.

Italians are lovers of delicious and simple food, at the same time they are big picks. They appreciate not only pasta, pizza or lasagna, but also other dishes. One of the favorite soups is kachucco soup with tomatoes and seafood, consisting of many types of fish, shrimp, squid, mussels. Often, residents of Italy prefer to complement it with beans, tomatoes, croutons.

A traditional seafood soup native to Tuscany, is thick and has thirteen kinds of seafood. However, before it was added everything that it was possible to catch during fishing or lay down at home. Over time, at least five different types of fish began to be included in the recipes , as in the word “cacciucco” 5 letters “c”, the Italian chefs advised to dwell on 6-7 marine ingredients.

Tuscan soup is very thick and resembles goulash. It includes not only fish, but also tomato sauce. Often cooks in coastal restaurants add red wine to the broth, despite the fact that white is more suitable for fish. Cooking does not take much effort, but you will have to look for fresh seafood – the taste of the finished dish depends on their quality. It is not high-calorie, KBZhU can be seen in the table.

What does it consist of

Sea delicacies are the main ingredients, so their choice must be approached carefully. 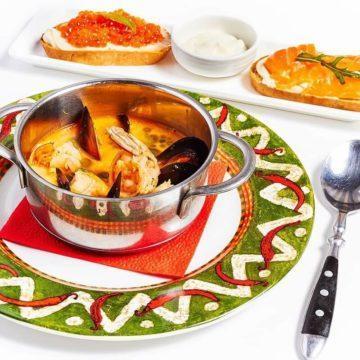 The following products will be required:

It is advisable to buy fresh seafood for cacciacco soup , since frozen ones are difficult to evaluate by quality. Pre-cooked broth from 600 g of the head and tails of trout, onions and carrots. The amount of ingredients is indicated on a pan with a volume of 3.5-4 liters.

The fish rotan photos and description

The cooking process of kachucco with seafood is divided into several stages: preparation of fish broth, sautéing vegetables and laying ingredients. You need to start with the preparation of trout, which is cut on the fillet, but the head and tails are not thrown away. They are placed in a pot of water, add one whole onion and one carrot, and then put on a slow fire. After 40-45 minutes, the broth should be filtered through a sieve to get rid of bones.

Next is the turn of the second stage – vegetables:

Once the vegetables in the tomato sauce are soft, you can transfer them to the strained broth. Fish soup is not ready yet, because there is no seafood in it.

They are prepared as follows:

Cook kachucco with seafood should be no more than 5 minutes, otherwise they will become tough. The dish acts both in the role of the first and second, because it is very rich and satisfying. Served Tuscan soup always with crushed garlic and toasted bread on a dry frying pan. As a rule, these products are laid out at the bottom of the plate, and seafood kachucco is poured on top and sprinkled with chopped greens. The dish shown in the photo becomes an excellent decoration on the table.