The continuation of a series of rare horizontalor from Izhevsk 1940-ies with locks on the side plates. Izhevsk a shotgun 1930-ies reviewed by me in previous numbers of “HORN”.

The recovery of the economy during the second half of 1940-ies, including the production of consumer goods, has affected the production and hunting weapons. 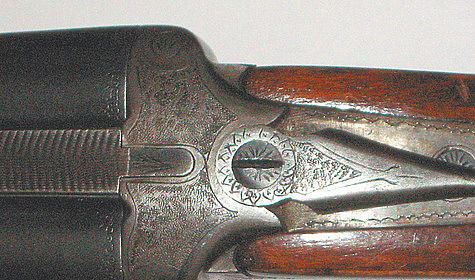 The first time for the base adopted the old pre-war models, thereby reducing the cost of preparation technology.

First in 1946, has released horizontally IZH-B-46 with locks on the side plates, which became the basis of a small scale production double barrel shotgun IZH-B-36 with similar impact mechanisms on side plates.

In the marking of a new model reflects the production year.

It is believed that in General the shotgun IZH-B-46 repeated the device of the last sample IL-B-36, although it really is partly modified.

Modified digital marking is introduced, to emphasize the new post-war stage of the manufacture of hunting weapons, which was in effect the orderly recovery of the weapons production plant of Izhmekh.

The old designation of “IL-B” kept in commemoration of the succession of models, where the letter “B” indicates, as before, “a”. Room the IZH-B-46 and the year of issue was indicated by marks on the pillow block shafts.

In the new sample into account comments on the design of previous models, it had a smooth descent shock mechanisms when closing the barrel block.

Produced the only double barrel 16 gauge with a barrel block with a length of 700 mm and was supplied made of walnut wood box with a neck of generally pistol shape. It weighed about 3.2 kg and the mass of the barrel block has reached 1.6 kg.

With these parameters, it is good for a balanced mass budget shotgun: the center of gravity of the gun without bullets and the ring was at a distance of about 65 mm forward from the breech of a slice of a barrel block.

Trunks model IL-B-46 16-gauge with a cylindrical drilling the right of the barrel and muzzle narrowing Chok left barrel gave the following figures of the battle shot: the right barrel is not less than 35 percent and the left is not less than 55 percent.

This was in line with the requirements of mass production guns of the 16th calibre. On some specimens the left barrel had a muzzle contraction “pauchok” and gave corresponding accuracy scree shot.

Being in good condition, shotgun IZH-B-46 is very highly regarded by fans of domestic hunting weapons. Released them a bit, now there are even less on the secondary market they do not stay.

A gun appeared in the Moscow Commission trade, will pick it up quickly, fans are not disturbed by either another city or distance. Walnut Lodge, of course, fade over time and the metamorphosis of the weather, but wiping natural linseed linseed oil restores the original wood pattern. 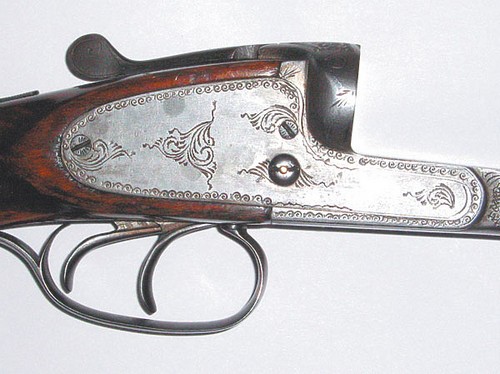 Start of production of the IZH-B-46, as the first post-war sample, allowed not only to convey the hunters of the party’s domestic production of shotguns, but also to show perspectives of development of hunting weapons in the difficult period of recovery of the economy.

This is the main meaning, despite a certain heaviness of design and modest engraving.

Model IZH-B-46 pretty solid and can withstand various metamorphoses in the hunt, so on the secondary market appear well-preserved specimens. But its the only caliber she could not satisfy the hunters who need mass weapons of different calibers.

Once introduced into production in 1947, the shotgun IZH-B-47 a similar design to the locks on the side plates has a wide range of calibers and is a model typical for the first half of the twentieth century.

The pillow block of trunks bear the mark of the arrow in a hexagonal frame. Locking the barrel block in the block triple, including the top cross-bolt system Greener and lower dual frame system Purdey.

The automatic safety catch locks the trigger hooks. There is a possibility unstressed smooth descent Kurkov. Provided production samples IZH-B-47 different calibers, including the 12th, 16th and 20th, though it should be noted that instances small 20-gauge on the market practically did not meet.

Design horizontally IZH-B-47 modified compared to previous similar Izhevsk shotgun, for example, to avoid misfires increased the amplitude of movement of the hammer when struck by the firing pin, reinforced and mainspring.

Thickened and slightly cropped at the rear of the lock plate front toe is fixed in a side groove pad under the pillow and fastened on the last screw.

Between the locking plate cross screw pulled to the rear. Pin pointers cocking brought out on side plates and protected rounded lugs, as seen in photo 2.

On the gun IZH-B-47 set blocks stems primarily length 700 mm, manufactured from Izhevsk steel grade 50A. Thus, a sample of 12-gauge weighed approximately kg. 3,27 the Trunks of larger caliber resulted in the fact that the center of gravity of the IZH-B-47 12-gauge Assembly has shifted further away from the flap of the pads.

The balance of the gun changed not for the better, but the hunters put up with it, as the serial domestic weapons in that period was not enough. The trunks 12-gauge had a diameter of 18.2 mm channels, rather narrow, but within the acceptable values for this caliber.

Muzzle narrowing “of pauchok” right barrel and “chalk” the left is allowed to get a regular gun available categories indicators of the battle shot: respectively 47 and 57 percent. 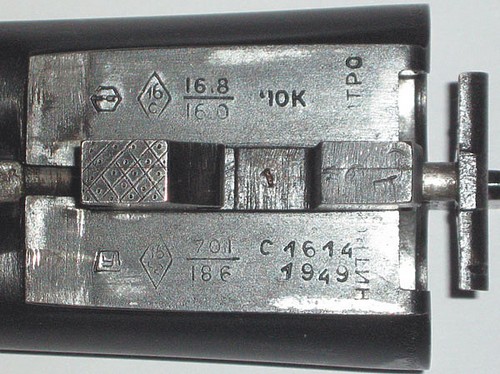 Approximately the same figures of the battle gave the gun IZH-B-47 and the 16-gauge, checked the cartridges equipped in fraction projectile No. 5. It is important that the “Passport” of this model indicated the number of drobin in the projectile — 200 pieces, which enables you to evaluate the actual performance of the fight shot.

The barrels of such guns with chokes “poluchat — chalk” given the accuracy of the battle 46 and 60 percent, respectively, 92 and 120 drobin. In the end the model turned out with ample opportunities for hunting.

Produced horizontally IZH-B-47 until 1950, the pillow block shafts mentioned only the year of manufacture, unlike previous models, where more detail was stamped with date of manufacture, including year and month of issue.

The pillow block shafts indicated the serial number, caliber numbers in the diamond, the diameter and length of bolts to 70.1 mm as a fraction, and the length of the chamber accurate to 0.1 mm. Marked as a fraction and diameters of the barrel and muzzle narrowing in mm, for example, the stigma of “16,8/16,0” shotgun of the 16th caliber.

Shotgun IZH-B-47 was tested in pretty harsh conditions, for which the cartridges were mounted at a heightened charge of smoke or smokeless gunpowder, for example, for guns of 12 caliber with a charge of smokeless powder weighing 3.2 g, 16-gauge with a mass of 3.0 g and 20-gauge weight is 2.8 g.

The mass of the projectile fraction is almost consistent with the nominal value of, for example, for a 12 gauge 34 g, 16-gauge 32 g and 20-gauge 25 g. it is Obvious that the test cartridges developed high blood pressure.

Then put a corresponding mark in the letter “U” in a trapezoidal frame, and test of smokeless powder is marked with the mark “Nitro” on the pillows trunks. Allowable working pressure 700 kg/cm2 was mentioned in the “Passport” of the gun.

The mass of the projectiles of shot and gunpowder test cartridges cite to current hunters were able to correctly assess their own equippable ammo.

Decorated with a double-barrel IZH-B-47-style Izhevsk mass models are quite modest, as seen in photo 3. Engraved stylized ornament embellished the contours of the breech trunks, pads and locking plates. And the locking plate is trimmed with a simple pattern.

The bed with the neck straight, pistol or poliestireno forms, there is a ledge under his cheek on a number of instances. Walnut wood is usually a modest out broad-zoned varieties. Small nick on the neck and forearm well brings out the texture of the nut.

On our secondary market horizontale IZH-B-47 is found very rarely, it is an absolute rarity and a subject of persistent search collectors domestic hunting weapons, despite the roughness of shapes and the sleek decor.

Shotgun IZH-B-47 a few, as before, and now. But so I completed a series of mass Izhevsk horizontalor the second quarter of the twentieth century with locks on the side plates, it is highly desired hunters.