When you go on a great hunting lands of Moldova, involuntarily expecting that from under the feet here-here will fly with the noise of pheasant, or a flock of partridges, a hare will jump out. A thick and high bushes by the river and it seems that now you will hear a crackling of reeds, which breaks the fleeing boar. But waiting in vain — inventory of hunting fauna here exhausted to the limit. Pheasant and wild boar remains, as they say, very few, hunting. Grouse shooting banned for 5 years, and the number of brown hare is decreasing every year. More or less satisfactory hunting for waterfowl is preserved only in the Transnistrian, the Meadowlands. 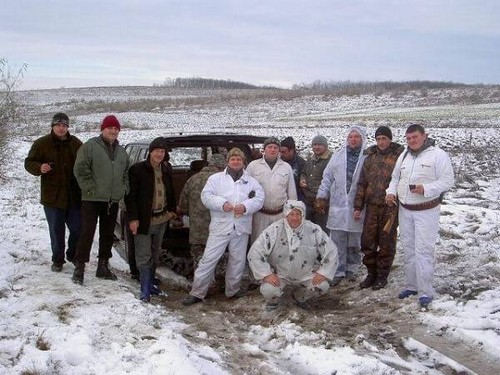 The basic hunting species of Moldova — wild boar, ROE deer, deer, hare, pheasant, partridge and waterfowl — those species for which there are excellent conditions for living and which are the object of sports hunting.

In Moldova there is a national and 26 regional societies of hunters and hotcollection in many farms. Since 1963, introduced mandatory registration of rifles and restricted the free sale of them.

In Moldova, taking steps to improve the hunting economy.

All seemingly intended to improve the condition of hunting economy. But something, apparently, did not flow, if the number of hunting animals is greatly reduced. First of all drew attention to the fact that the part of the Chief Directorate of forestry and nature protection are not provided with proper guidance in the organization of hunting economy and control over the conduct of it. Suffice it to say that part of this cupola, there is only one inspector in hunting, which, of course, can not do anything practically. The forestry workers were not included in the circle of their duties and care for the hunting fauna, and conducting the consultations the Belarusian delegation activities, along with forestry.

All more or less significant forests are the best habitats for deer, ROE deer and wild boar. In the forests of Moldova brought a few deer and was banned the hunting of ROE deer. Deer are well established, and the number of deer began to increase rapidly, reaching in some forest enterprises the marginal density. This is compelling evidence that at a certain organization, you can quickly obtain good results.

A small forest massucci among the fields, especially in gullies and shelterbelts are necessary for the breeding of pheasants, partridge and hare. Here these species have a good protective and feeding conditions, especially when in the forests introduced tree and shrub breeds, increasing feed stocks.

Society of hunters has not been the organizers of the broad masses of hunters. Even bench shooting is not being used fully, but we know that clay pigeon shooting lessons, no doubt, enhance the culture of hunters. Shooting-hunting stand in Chisinau, administered by the national society of hunters, poorly equipped and extremely run.

All this is alarming Moldovan hunters.

What and how, in our opinion, it is necessary to do in the first place?

More determined to carry out the fixing of hunting grounds for grassroots groups, assisting them in the organization of hunting, implementation of biotechnical measures. In each assigned sector it is useful to have a reserve of its area, which should be replaced after 3-5 years.

Grassroots hunting teams are a decisive force in the organization of hunting economy and should, therefore, give them greater autonomy in the use of the results of their labors, including the establishment of the amount and timing of shooting.

Republican society in every district should organize a demonstration farm, if it be the breeding of pheasants and grey partridges, as well as to carry out the capture and resettlement of the game in the land of hotcollection.

Main Department of forestry and nature conservation, which is responsible for management of the hunting economy, has great potential for improvement. It should be obligatory to all forest employees not formally, but in essence to join the fight against poaching. Well, if the Director or the chief foresters of forest enterprises will be included in the composition of the regional societies of hunters and will help these groups to organize and lead hunting on the fixed land.

Forestry in Moldova are large plantations on the lands of state farms and collective farms on the hunting grounds assigned to them. Therefore, in the composition of forests it is necessary to introduce tree and Bush breeds, improve fodder and protective conditions.

In the forests of the state forest it would be useful to create forest hunting ranges. But should not these farms to protect a stone wall from the hunters. Upon reaching the desired density of individual species of hunting fauna should be shooting or trapping with the participation of hunters, spreading through society of hunters paid cards of shooting. Along with this, it is useful to organize a network of state reserves.

I must say that still doesn’t account for the benefits of such types of hunting fauna, as pheasant and grey partridge, in the struggle against pests of agricultural crops. Often greatly exaggerate even minor damage to gardens and rabbits, and the hunters — death game from pollination and fertilization. No need to tell who is right and who is wrong, but one thing is clear — consolidation of hunting grounds for hotcollection is a good precondition for cooperation.

It is necessary more actively to combat harmful animals and the stray dogs, which, by the way, in Moldova very much.

Shooting foxes is clearly insufficient, it is important to note that in the last three years, the number of passed skins of foxes remains stable with fluctuations from 7.1 to 7.6 thousand and the number of delivered skins rabbit collapses. The number of foxes in the hunting ground is not reduced, and they definitely affect the number of hares, destroying young. The same can be said in relation to pheasant and partridge, which Fox, of course, not spared.

Natural conditions, embarked on a PostScript hunting grounds grassroots groups with due attention to the issues of hunting by workers of forestry and agriculture and, most importantly, the efforts of the hunters are a good prerequisite for the rapid rise of hunting in Moldova.