Japan is located on the Eastern edge of the Asian continent. This is a small, stretched from the North to the South of the island nation. Its main Islands — Hokkaido, Honshu, Shikoku and Kyushu. The Country of the rising sun — 370 thousand square kilometers, and it mainly consists of mountains covered with beautiful forests and groves. The population is about 127 million people, hunters among them 250 thousand. 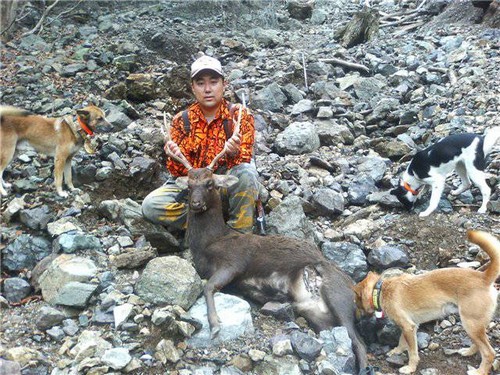 As you can see, in comparison with other countries, the percentage of hunters in Japan less: the hunt is not in Japan’s popular sport, as a mere mortal it is also not available. Enjoy it often do not allow the distance of hunting grounds, economic reasons and lack of free time. However, in recent years the number of hunters is increasing at an average rate of 10 percent per year. It would seem a welcome development gave rise to their difficult and troublesome problem: the growing number of hunters resulted in a catastrophic reduction in the number game. Now both the government and interested in the hunting community is seriously engaged not only with the protection of wild animals and birds from extinction, but also to increase their numbers.

Currently, Japan is constantly home to about 200 species of mammals, hunting is allowed only on 17 species, including black and brown bears, wild boar, spotted deer, Fox, raccoon dog, badger, marten, squirrel, flying squirrel, column, hare, nutria, stray dogs and cats. Migratory birds there are in Japan more than 400 species, allowed the shooting 51. To the category of edible game they also include a Raven, crow, rook and Sparrow.

Unlike European countries birds of prey in Japan do not destroy: they are few in number and are protected along with other species of birds.

The hunting and protection of wild animals in Japan know the state authorities represented by the Ministry of agriculture and forestry and, in particular, the division of hunting Department forestry and isochrony this Ministry. However, the Department does not yet have neither a strong state nor a network of subordinate organizations. Therefore, to ensure that hunting in the country were carried out regularly in cities, counties and provincial councils for the protection of wild fauna. There is also the all-Japan Union of hunters, created with the assistance of the government and individuals. They conduct anti-poaching activities, carrying out police functions. In short, in Japan, the hunting is mainly listed entities and organizations. They are studying the biology of wild animals and their protection, arrange for their feeding, artificial breeding, destruction of harmful animals and birds, watching the hunters respect the rules of hunting, engaged in explanatory work among the population, detain poachers and other violators of hunting regulations.

Japanese hunting regulations developed on the basis of rules of hunting, the US and Europe, but taking into account traditions, as well as climatic, geographical, Zoological features of Japan. Officially they are referred to as the Law on the protection of wild animals and birds, and about hunting them. The basis of law is the idea that the protection of wildlife and improving the natural environment is a very important public matter. The law is valid throughout the territory of Japan and all hunters are required to strictly obey.

To be eligible to hunt, the hunter must undergo a hunt and to take the state qualification exam. The hunter must be at least 20 years. Only after the exam wants to hunt can contact the office of the Governor of the Prefecture or capital for a hunting license. In Japan, installed a tax on hunters. It compensates for the cost of wild fauna seized in the average hunter from the land, and is about three thousand yen per year. The certificate is only valid for years and gives the right of hunting on the territory of the Prefecture that issued the permit on the territory of other administrative units it is valid.

In Hokkaido, the hunting season lasts from 1 October until 15 January, on Honshu, Shikoku and Kyushu — from 1 November to 15 February.

Now about where Japan is allowed to hunt or, better, about the places where it is prohibited. It is forbidden in national parks, wildlife sanctuaries, on public roads, in parks, on the lands of the temples, monasteries and schools, the cemeteries, in urban zones, in areas of dense development and congestion of people and finally, in places specially designated by the Ministry of agriculture and forestry. Within the area designated in his license, the hunter can take a fancy to any place except the above. For example, with the consent of the landowner, you are free to hunt on his land: custom welcome hunters ingrained in our country since ancient times. In short, the Japanese hunters in this sense, not offended.

In addition, in Japan there are special hunting areas with the permission of the state or local public associations is adjustable hunting. Especially famous for the state forest district of Nikko, which allowed the shooting of deer. To hunt in the hunting areas, you must have a special licence fee for the right of hunting in every area of their own. 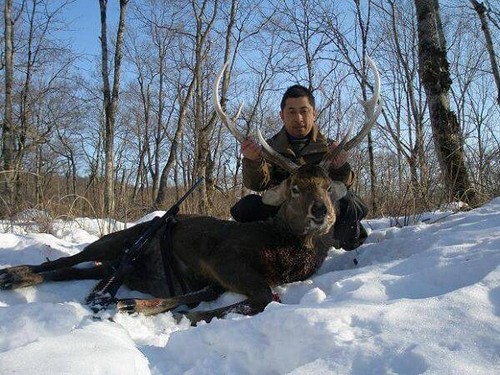 The hunting law in Japan allows Japanese hunters during the day to produce only a certain, strictly observe the number of wild game: pheasant green, Korean and copper, greater white-fronted goose, tundra goose, 2 birds to choose from, Japanese hazel grouse — 3 pieces, Chinese bamboo pheasant, water hen and coot — 5 birds at the choice of the hunter, Japanese quail, wild duck, snipe of various kinds and the turtledove the big — 10 pieces.

For other bird species to the established standards of shooting is not, in principle, they can produce indefinitely, although in practice this is not easy.

For shooting wild animals no special regulation exists, but the conditions of hunting are such that many will not shoot.

In Japan there is a well-known gun factories. Face arms industry of the country are the largest plants of the company K. V., Miroku plant and the plant Orin Codensa. They commercially release a magazine-rifle, adnetwork and double-barreled shotguns in both vertical and horizontal location of the guns, hunting rifles, air rifles. The cheapest gun costs about 10 thousand, the most expensive 150 thousand yen. Especially popular shotgun with horizontal and vertical arrangement of trunks cost from 40 to 60 thousand yen. In recent years more and more Japanese rifles have been exported to America, Southeast Asia, Australia and Europe. In addition to these, we have other long-famous companies producing weapons worthy of the attention of hunters. They use the English production methods and a great craftsmen, by hand produces gorgeous piece of the gun. Of course, these guns are very expensive.

In addition to domestic rifles in the shops you can buy guns and foreign brands:

Since most of the guns imported duty free, the price is higher: 100 to 500 thousand yen.

A relatively inexpensive magazine-rifle of Winchester and Remington, so the Japanese hunters quite a lot. Rifles of the highest class are usually used for bench shooting.

To have guns is permitted only to persons over the age of 20. Who wants to buy a gun for hunting should submit the mandrel from the doctor and the police, proving his mental usefulness and that he is not an addict.

Japanese hunters are United in several clubs, societies and associations. In each district a membership fee, but on average they are equal to 500 yen.

The largest organization — all Japan Association of hunters. It is created by the community with government assistance. The partnership has offices across the country in cities, towns and villages. In Japan, no doubt, the hunter who does not would be a member of this Association. It renders great service to persons wishing to hunt, giving them recommendations for obtaining permits for shooting.

As already mentioned, the hunting season in Japan is short, and this contributes to the rising popularity of trap shooting. Everywhere there are stands, of which the most famous Olympic stand in Tokorozawa, a round and trench sites. Athletes stendovye basically competing, trench, and avid hunters prefer the round stands. The all-Japan competition to demonstrate their skills outstanding hands from all over the country.

From gundogs in Japan the most widely English setters and pointers. This is great for hunting pheasants, quail, snipe. Go hunting on the green or on the Japanese copper pheasant without these dogs V. our conditions is simply useless. Hunters also keep Irish setters, Weimaraner, Hungarian pointers, spaniels, however, an accurate accounting of their century Japan is not conducted. Widespread we Kurzhaar, they are more other dogs suited to the conditions of our hunt and it seems that setters and pointers are gradually beginning to give them place.

For hunting hare is usually used of the diminutive hounds beagles, the feed and the contents of which do not require much effort. And how nice it is to hear in the woods the barking of a pack of hounds chasing a hare!

There is in Japan, of course, and a few domestic breeds of hunting dogs. This so-called Nipponia average — sized dogs with erect ears and curly hair. Something where you can meet imported from Russia huskies. Apparently, huskies and Japanese dogs have a common origin, confirming that Japan was once part of the Asian continent.

4 Comments on “Hunting in Japan”