Winter route accounting of game animals (3MU) was recommended by the Ìglavohotaî as the main post-harvest to determine the number of animals in the wetlands over large areas. It is held on a pre-planned linear routes evenly, covering different types of hunting grounds and gives an overall picture of the spatial placement of hunting animals. I would like to dwell on the mistakes in the processing of accounting data. 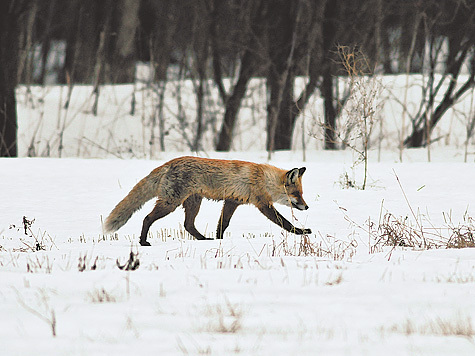 Objectivity determine the absolute number of animals (density habitat individuals per 1 km2 or 1000 hectares) and the reliability of the obtained information depends on the quality of the techniques applied and the correct choice of the initial data for calculation formulas. It is believed that the greater the number of traces of the beast will be encountered on the route, the higher the density in the area. It is generally accepted that the number of tracks crossing the route line is proportional to the number of animals of this species, depending on its activity and extent of diurnal variations in these particular circumstances.

The calculation of the absolute number of animals based on the use of formula A. N. Formozov (1932):

R = S/dm (1) is the population density of animals (R) equal to the quotient from dividing the number encountered on the route individuals (S) in the area of the strip-based (dm, where m – length account of the route in km, d is the bandwidth of the account equal to the length of the daily course of the beast in km).

When the overall logic of the formula A. N. Formozov there is inherently two unknown factors: S – how to move from the amount of traces of N to the number of individuals S; d – how to determine the width of the stripe account (which is the attitude of length of the daily course of the beast).

Passing along the planned linear route accounting clerk encounters signs of animals, recording the number and direction of crossings. Each new encounter traces of the beast on your route, different handwriting from the other, means the daily crossing of the area of its habitat. The record-Keeper does not deal with the length of the daily course of the beast: – d (it’s neither here nor there), and from daily activity – n (configuration and tortuosity of the track), is highly variable, from weather changes, sex, age and physical condition of the animal. Daily beast settles them in the land may be very confusing or weak winding. Contoured legacy diurnal animal (habitat), usually has the shape of an irregular ellipse. Field the route can cross the plot of the beast at any point and any valid direction regardless of its shape and location on the ground.

If the same habitat with the animal (e.g. foxes) to cross at the same point in several directions, together with different length segments of the path within it, then their arithmetic average will be close to the diameter D of equivalent habitat with individuals in the form of a circle (Gusev, 1965). Each segment in the figure (and the route) crosses several times the legacy of the Fox. The number of intersections within a segment by the index of daily activity. The arithmetic average of the total activity rate reflects the average daily n. The indicator may be further refined by statistical analysis. These basic indicators necessary for calculations of absolute abundance are determined simultaneously with carrying out route surveys.

While tracking the beast does not need the length of a daily course (determined by counting the number of its own steps), and the rate of his daily activity – n. For the registration of the sinuosity of the track is invaluable the use of modern satellite Navigator.

When establishing the average daily activity of the beast n you can easily move from track – N to the number of individuals of S, dividing the activity total number of registered route traces: S = N/N

For a good answer to the question: “How to determine the width of the stripe account?”, please refer to the schematic drawing, from which it follows that the meeting traces of the beast on the account the route A – B occurs only at the intersection of the area of its habitat. The areas of habitat may overlap with a trail route in any place: at the center (1, 6), left (3, 5, 7, 8 ) right (2, 4), including tracks, barely on route (2, 5, 8).

However, if you narrowed the strip of account, equal to the average diameter of the home range of individuals (D), the majority of registered sites will be outside, which will lead to an overestimation of the calculated data. When wide band based (2D), the opposite, there is underreporting because of underreporting habitats are not crossed by the route, but being in the band account. Empirically (Jackson, 2005) it was established that the lowest error gives the average width of the tape accounting for 1.5 D. After substitution in equation (1) d (length of the daily course of the beast) 1.5 D square account tape can be determined as 1.5 Dm.

After replacing in the numerator of the formula A. N. Formozov (1) S (number of species encountered on the route) by the ratio N/N and the denominator (lane keeping) the length of the daily course of the beast d (bandwidth) on the diameter of its hunting grounds of 1.5 D, it has acquired the most perfect form (3):

To improve the accuracy of inventory, to tracking daily track of the beast took place simultaneously with the route surveys in one daily activity. This eliminates the need to establish the length of its daily track number of its own steps. They only need to pass along the track of the beast with the included Navigator, and fix its configuration. Identification of daily activity trace animals moving seamlessly from recorded traces by the number of individuals, and on the diameters of diurnal habitats provide a clear insight into account the width of the strip.

Our proposals do not make large adjustments to the organization of 3MU. But the use of Centrokhotkontrol the proposed method and a new formula for calculating the accounting results in the elimination of organizational and methodical observations by Y. Dunishenko, can raise the prestige of the faceshield as the primary method of determining after the game populations of game animals in large territories.