Night hunting reasonably relates to quite specific classes. Man is poorly adapted to whatever action in almost complete darkness. Therefore, to achieve the desired result in view of the coveted prey he needed various devices not usually used. Many inexperienced hunters think that is enough to acquire the night optics and the problem will be solved. This approach certainly deserves attention, however, the most correct approach to the problem comprehensively, considering both the weapon and night vision sight. 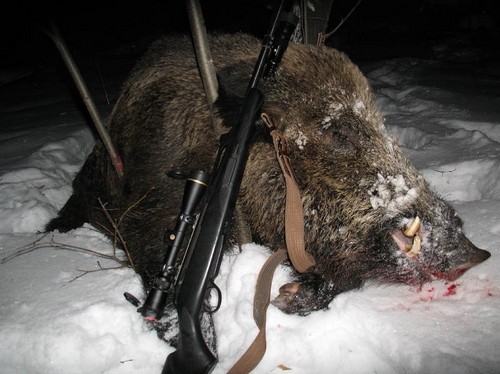 The fact that not all kinds of popular, especially among beginners, shotguns can be mounted night sights. For example, for double-barreled guns, the use of which is considered a classic option hunting, this operation is not possible. In this case, the problem is solved by purchasing an under-barrel flashlight. This device in a modern design lights up the area for a fairly serious distance, often reaching 100, and when using particularly high-quality and powerful devices and 150 meters.

This is enough for most kinds of night hunting, which occurs in most cases at distances between 20 and 70 meters. This equally applies to the use of buckshot, very effective at these distances, and the bullets for the widespread 12-gauge, with serious stopping power. In other words, the use of under-barrel flashlight is quite appropriate and quite a large number of situations is almost equal in effectiveness to more expensive night vision sights.

However, experienced and seasoned hunters still prefer the latter option for hunting in the dark. Therefore, it is often recommended that the acquisition of individual weapons designed for hunting only by night, and which can be mounted night scope. Its advantages are obvious – ease of use, quality review, independent of the illumination level, and serious help in aiming.

The third solution to the problem, are special glasses or a monocular for night use. Such devices are much cheaper scopes, in addition, their application is much easier and more comfortable for the hunter, so as to retrieve an image, it is not necessary every time to throw up the weapon.