Coccidiosis is a common disease which occurs frequently in rabbits and chickens. The causative agent of invasive diseases – protozoa single-celled parasites that enter the body of the animal in different ways.

There are several kinds of coccidia that provoke further development and spread of coccidiosis.

Only one infection can affect the liver, and the remaining intestinal mucosa. Animal diagnose hepatic and intestinal forms of the disease. In most cases, at the initial stage affects one cell, and further affects the rest of the cells. In this pathological course of the disease becomes a focal character. Parasites are well adapted to different environmental factors, therefore they do not consume sanitizers.

Coccidiosis is the most common disease in rabbit farms. Animals can become infected regardless of the time of year. The period of exacerbation was observed in spring and summer. Coccidia, which are found in the animal body, do not survive in the human stomach. In the area of risk are rabbits, whose age not more than three months.

The carriers of the disease adults who have rarely seen the period of exacerbation. Infection of animals occurs through water, milk and food containing pathogenic parasites. Newborn rabbits are infected through breast milk. Bacteria contained in the stool, it is therefore necessary to monitor the hygiene of the cells and prevent them from falling into the food.

Coccidia can be spread from patient specimens, which did not pass quarantine after purchase. Other sources of infection – flies, rodents, birds, dirty hands of the breeder, dirty equipment that clean cells. The acute course of the disease and the rapid infection of other individuals is observed in case of violation of veterinary-sanitary norms.

Following are the reasons for the spread of pathogenic bacteria:

Clinical manifestations of the disease in rabbits

The duration of the incubation period – not more than three days. There are cases when the bacteria are already present bacteria but do not manifest themselves. The disease can occur in mild form, so the health and life of the animal is not in danger. Coccidiosis can damage under adverse ambient conditions, when the bacteria begin the activity.

As a result, the parasites strike the intestines and liver, and the disease develops into a severe form.

In rabbits, observed the following violations in the body:

If breeders do not pay attention to all the symptoms of coccidiosis, the body of the animal will not be able to withstand the attack of the parasites. The destroyed cells of the liver and intestine is not restored. With the progression of intestinal forms of coccidiosis rabbits can die within 15 days.

Before death the animal appear cramps, they are plummeting, tilt your head backwards. Disease hepatic form is considered less dangerous, in which the rabbit there is a greater chance to survive. They can die in a month after infection. With the simultaneous progression of two forms of the disease death occurs much faster.

To determine the cause of death will help with the autopsy. When it affects the liver, there are small white spots having an appearance of knots and threads. Located inside the intestines similar tumors of smaller size. Liver damage leads to proliferation of connective tissue, thickening and enlargement of the bile duct. With the progression of intestinal coccidiosis in animals appears liquid with gas bubbles, reddens the mucous membrane of the gastrointestinal tract.

Rabbits under three months, often faced with acute intestinal coccidiosis. They observed a strong bloating, diarrhea appears (often in summer), constipation, lack of appetite, stunted growth, sudden weight loss. The little rabbit can SAG the stomach, they dramatically fall to the foot, making swimming movements of the limbs; there are cramps.

Only a small proportion of infected rabbits have a chance to recover and survive. Other individuals become carriers of coccidiosis. If treatment is started early and very late, the animal will die in 12-14 days due to severe exhaustion.

Clinical manifestations of hepatic coccidiosis similar intestinal disease. The only difference is the severity and intensity of symptoms. Liver damage leads to the development of hepatic of the syndrome. To external signs include yellowness of the mucous membrane – the eyelids, the oral cavity.

The duration of the disease depends on the severity of the leak, an average of one to two months. The lack of treatment leads to the death of a rabbit. Diagnosis can veterinarian after a comprehensive survey. It takes into account the epizootic condition of the animals, clinical signs, test results, post-mortem autopsy.

Treatment of coccidiosis in rabbits

Coccidiosis is the most dangerous disease, but early treatment gives good result. The main task is to correct all the deficiencies in the maintenance and feeding of the animal. Veterinarians prescribe a treatment sulfa drugs. 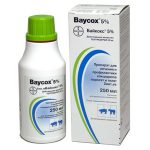 Coccidiosis in rabbits treated with the following medications:

During treatment, breeders must add to feed large amounts of vitamins. In the diet introduced dairy whey, buttermilk.

Coccidiosis in hens and Chicks

Coccidiosis in chickens develops after the infected feed, water or equipment. Birds exposed to a variety of bacteria – Eimeria tenella.

For timely identification of the disease should pay attention to the following symptoms:

If untreated for four days the birds die. That is why it is important to identify the disease and begin treatment. The treatment involves taking various drugs that affect the pathogen and lead to their complete destruction.

Treatment of coccidiosis in chickens and chickens is possible only chemical drugs. They are added to the drinkers or feed. After penetration into the stomach medicines slow down the development of coccidia and completely destroy them. At the time of treatment is recommended to remove infected individuals.

Instructions for use of Cocritical for Chicks

It is an efficient and effective solution for oral administration. The drug has found its wide application in the treatment and prevention of coccidiosis in poultry broilers, rearing, turkeys, geese and ducks.

It contributes to the complete destruction of coccidia and Eimeria, which parasitize in the body. One ml of the medicine contains 25 mg toltrazuril was. Before taking you need to consult a veterinarian.

Agricultural birds the drug is added to drinking troughs. Dosage: 1 liter of the drug per 1 ton of drinking water. Two days later, it is necessary to replace and raise the tool again. Birds vpaivaetsja 8 hours two days in a row.

If birds are diagnosed with a difficult disease and a severe form of pathology, a course of therapy is repeated after four days. The drug is available in polymer bottles of 100 ml each. The shelf life is not more than three years from the date of production. Keep the preparation you need in a dark place with no sunlight. Optimum temperature from +5 to +25 degrees Celsius.

Other drugs for the treatment of coccidiosis in birds

Another no less effective against coccidiosis in chickens is Coccidiosis. It can be used for the treatment of young individuals. The drug contains amprolium hydrochloride and vitamin complex. They all cope with the destruction of pathogens, stop their development and lead to a total loss. 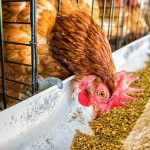 Upon detection of the first symptoms of coccidiosis breeders must adhere to the following schema:

Feed and water are given in one day. The next day required the replacement and preparation of a new portion.

Another group of drugs that treat coccidiosis in chickens is tookcidiostatiki. This is an efficient drugs which has found its application in the treatment of coccidiosis in poultry. The medication is added to the feed for young chickens and Chicks. When the main component of the drug ingested by the birds, it helps to suppress infectious pathogens and their complete destruction.

During the development of coccidiosis in chickens there is the death of epithelial cells. Pathogenic infection develop and reproduce in the intestines. The result of such exposure violated his integrity and structure of the walls. Delayed treatment leads to the development of necrosis, disruption of peristalsis and absorption of the main components of food, a shortage of nutrients. The young birds appear hungry swelling. Coccidiosis often progresses and escalates in the warm season or in rainy weather.

7 Comments on “Coccidiosis in chickens and rabbits: symptoms and treatment”