For those who keep pet birds, rats are one of the main problems. These animals nibble the walls of the chicken coops, killing small Chicks, but the worst: they carry all sorts of infections. This problem can be expected of any breeder, so it would not hurt to ask about how to get rats out of the coop. 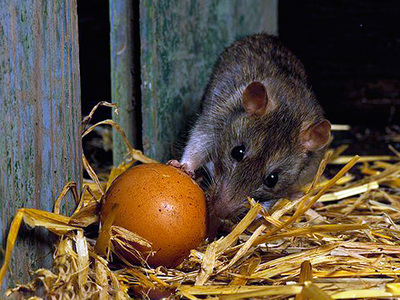 This can be done even without the help of designated services.

Let us examine that in this article.

One of the most popular ways to scare away — the smell. Rats have a very delicate scent, more than that, they are just like other rodents do not like the scent of singed hair. The smell causes them fear and anticipation of danger, therefore, sensing the smell, they hurry hurry to leave the place. 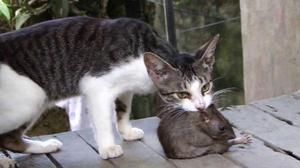 The best way to get rid of the troubles — is to prevent its occurrence. To do this, don’t be lazy when building a chicken coop to sprinkle on the ground in the chicken coop layer of gravel, pre-mixed with broken glass.

This folk remedy is better only prevents the penetration of rats in the chicken coop. Moreover, if the chickens live in a wooden construction, the bottom wall is desirable to cover with iron, to prevent rodents damaging.

If the owner of hens still have neglected precautions in the construction of a chicken coop and rats could get in, it will be necessary to use other methods of struggle. It must be done immediately upon detection of any tracks, otherwise, instead of two or three rats to the holder of the coop will have to deal with the invasion of rodents.

Another great way to fight and get rid of rodents is to get a cat. 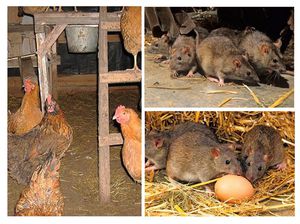 However, there is a possibility that the cat might be interested in not rats and chickens, so this method of rodent control there is a risk.

You can also spread cat hair around the rat holes, because the smell repels rodents.

Back in the old days, people thought how to get rid of rats in chicken coop, so even then there was a method of spreading ash in the coop and near the burrows of the gray predators. For unknown reasons, rats and mice hate the kiln ash.

The rats in the chicken coop can also be arranged with the help of special plants. Usually for such purposes use the beans, onion, and rosemary. Rodent is very scary smell that these plants emit.

The owner of the chicken coop can throw in rats in nightshade, broom, crow eyes, Aconite protivogaznyh. All of this is used for making poison for rodents in the form of special lures.

Ultrasound in the control of rodents 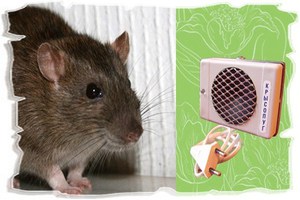 Ulrazvuk — one of the modern methods of dealing with mice, rats, and other rodents. Modern devices emit ultrasound waves, which adversely affects the rats and they begin to panic. As they say device manufacturers, man these ultrasonic waves absolutely nothing can not hurt.

There are many types of repellents for rodents, the buyer may choose at its discretion to different levels of output power. 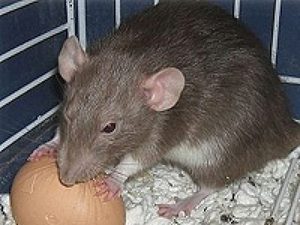 Electromagnetic waves can rid the chicken coop of rats for one week, however, there must be installed a socket, powered from the mains.

There are other devices, such as powered, however, much they will not help, they will not be able to achieve the desired result. Moreover, the device for dealing with rats in the chicken coop needs to run without stopping. Also, it should be placed in a special way.

The most important thing is to keep rodents several ways of output, because they can go crazy in a confined space, when long time they will operate the unpleasant sound.

There is another way how to get rid of rats in chicken coop, while not harming the birds are glue traps. They have a special glue that you can buy in any Department store. It is applied at the edges of small pieces of plywood.

In the middle put a small piece of cheese, bread or biscuit. Installed this fixture in the night, and in a place which will not be able to get chicken.

The composition of the adhesive forces can be applied in very thick gloves. The owners leave the coops about this method, both positive and negative feedback. Many believe that the adult rat, it is impossible to hold in place with glue, especially if you hold and work, then it is unpleasant to take out the trap right along with suffering animals. 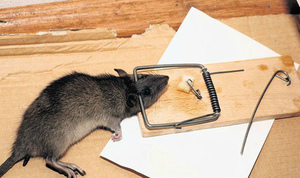 The same awkward situation usually arises when it is possible to catch a large rat or a mouse in a trap with a bewitching bait (such as cheese or bacon). How to get rid of rats in chicken coop offered by many humanists who do not want to kill animals.

The process of catching pests can be never-ending, moving in a circle: fished one, rendered, the animal came back, he was caught again, and so on indefinitely. If the owner of the chicken coop a lot of patience and a strong love for animals, he, of course, can also use these methods.

The Bank, a glass or even a flower pot is perfect as a trap for pests. In order for this to work, you have to pin it to the bottom of the tank a small piece of bait, the publisher attracts animals flavor. 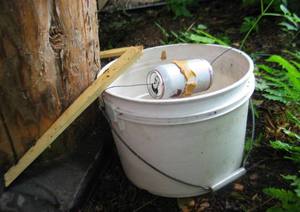 Ready put the pot upside down on a Board, after putting it bluntly. The pest will start to chase the food, gets in, pushes the Board, the whole structure will fall and the animal will be under capacity.

Also, there is a way for those who are not too lazy to work for his glory to bring rodents from habitats of chickens forever. For this you need to dig a very deep hole. It should be of a size to fit a large can, such as milk and its upper part remained above ground.

After there were placed in the jar and placed in such a way in the wall, you need to make a hole (diameter approximately eight centimeters). The hole should be above the ground. Inside the vessel is put bait with an aroma and close the lid. The animal wants delicious food, but fall into the can, and get out of it will no longer be possible. 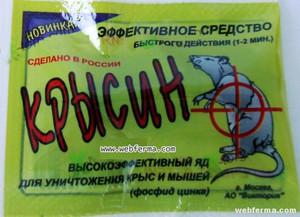 In order to see the coop from rodents, you can use special poisons and drugs. The specifics of all the drugs are different. There are those on which the poison begins to take effect in a few days.

Quite clever rodents think that the tool is harmless, and eat it. However, they are not smart enough to understand the action of drugs. The result of such harassment is the lack of oxygen is air, the animals rush to quickly escape to freedom, leaving the coop. There are also drugs which pests are killed very quickly, it takes a few minutes. To do this, mix the contents of the vial with meat or seeds.

You have to be careful in the choice of poison and take one that will not harm the birds. There are also poisons, which is composed of the element, not allowing dead animals to rot. It is also important, because it is possible to protect against odor and microbes itself, and chickens.

To poison not tried birds, it is better to hide in a designated box, which should be done in the opposed walls of the hole with a diameter of about five centimeters. This must be done because rodents are very afraid of closed spaces, and the hole in the wall will cause them to make sure that there is a way. They can easily eat the food with poison, later dying. Chickens, for all that, just can sit on the box. However, the danger to Pets is still: cats, for example, can eat the poisoned mice and die too.

Also, pests crazy about flour and sugar. Those who are faced with this problem, as rodents in the chicken coop, I suggest to mix it with lime (the proportions should be approximately equal), and next to put a vessel filled with water.

This combination is deadly for animals. Animals quickly and without pain die from indigestion. These tools also should be located far enough away from the birds, this moment should be consider carefully.

There are many different options of how to deal with rats in the chicken coop, but here are all the major, which already has helped someone. All these methods are excellent to expel or exterminate rodents without harming the birds.