Masaichi breeds of chickens have long enjoyed a deserved popularity among poultry producers. And this is not surprising-these chickens not only supply a family with delicious meat and healthy eggs, but also can bring good profit through fast set of commodity weights to the youngsters. 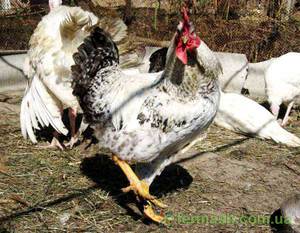 This breed of birds brought the breeders of the Hungarian company Hubbar . More recently, the firm was little known, but today, thanks to the success of the CSD Master grey it has branches in France and the United States.

By the way, because of these branches there is a misconception that the chickens have Master gray French or American origin.

Despite the fact that this breed was bred in Hungary, gained popularity around the world she started with France. French farmers were the first to appreciate the benefits of this breed and put on stream its breeding.

Hungarian plant breeders in the breeding of this breed of poultry set out to the possibility of getting meat chickens, which well will feel not only in terms of poultry, but also on the peasant farmsteads. In their task they are fully managed. Chickens Master grey turned easily sated and content.

For the first time about this breed talking about 20 years ago. Then the representatives of the Hubbar on one of the poultry conferences mentioned in passing about the work on the new breed is undemanding to care, diet and the temperature in the house. It was even named the provisional name of the breed of Master grey. Later, it was fixed for these chickens and was included in the description of the breed.

The new breed was developed by crossing males and females of the species Redbro and Master Gray’s . The latter was the result of crossing breeds with the breed Redbro S .

It is worth noting that to breed chickens breed Master grey will not work. The fact that breeders have classified the secret of the purity of the breed. All the farmers tried to reproduce it, faced with the same problem: the offspring acquires the characteristics of one parent. Besides, he has a worse weight gain and egg production. For this reason, young breed Master grey better to buy in nurseries with the name. 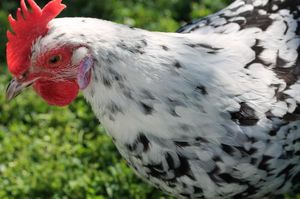 Chickens Master grey treat masojidek direction. Time commodity weight is only 6 months. While hens weigh 4 kg, and the males can weight up to 7 kg. Females are starting to give the first eggs at the age of 3.5 months. In the description of the breed from the company Hubbar States that with proper care these birds can produce up to 300 eggs per year each. These results are comparable with the results of the best egg breeds.

According to farmers, the meat from chickens Master grey is very tasty, devoid of excess fat, fairly dense, but delicate. Because chickens have large belly meat it is used for the production of baby food. There is a demand for hams of these birds.

Females produce large eggs weighing 70 g. eggs are often cream-colored, rarely brown. According to farmers, they have never received from one chicken breed Master grey 300 eggs. But the 200 and a little more – it’s everyday reality. There is an opinion that the breeders of egg production can be obtained only in a sterile environment of the poultry farm. But let’s not forget that these birds were taken specifically for keeping in private households.

Breed won the title of Master of Gray . As you know, the word gray means “gray”. Birds of this breed have a noticeable greyish-white plumage. And white and gray feathers distributed over the body mostly uniformly. A slight imbalance is only on the back, chest and neck. On the back the feathers are predominantly white on the chest and neck they are mostly grey.

Birds of this breed have a bright red comb and well defined as earrings.

The body of these large chickens. It could be called massive, with a weighting of indicators. Legs strong, medium length, with well developed muscles. Bones very strong.

Some “experts” claim that there is a very similar breed of chicken called the Master GRIZ. In fact, it is the same bird. They just come from France and the second word in the name of the breed read in the French manner – gris .

By the way, in our country this breed is known under another name – the Hungarian Giant.

The main advantages and disadvantages of the breed

Chickens Master grey in its characteristics can give odds to the best birds mosaicing direction.

According to the official description, they have the following advantages: 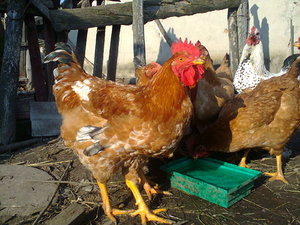 Amazingly, despite the appearance of these birds and weight, they practically do not accumulate fat.

It would be unfair to tell about some advantages and disadvantages to forget.

The disadvantages of this breed are, but they are quite a bit:

It should be noted that because of the impossibility of self-breeding birds of this breed is still not widespread in our country.

The initial phase of hens of Master grey

Under the initial content means the formation of a chicken flock. According to experts, in the beginning it is best to buy grown chickens than to remove them from eggs in a homemade incubator. The fact that the grown chickens have a stronger immune system, in contrast to derived from eggs.

The optimal age of the chickens, which you can buy for the formation of chicken stock – 10 days.

In the future, the herd can be replenished through the purchase of breeding material. By this time in a chicken flock will be a hen. So you can trust the hatching eggs part of it.

During incubation the breeding of chickens, they cannot be immediately collected from the incubator. You have to let them dry. Only after that they should be moved to a warm place under the electric lamp. Most often it is a cardboard box with bedding.

In the box they should be in the first 2 days, until I get legs. After that, Chicks can be put in the nest the hen. She will accept them and will feed the next 60 days.

In that case, when the chickens very much, to put their fish is not worth it. The fancier will have to follow them in the first two weeks. Then they can be released for an independent life in a separate cage in the coop.

In any case, it is inconceivable to them old birds. They can rasclaat young.

The conditions of detention

When the breeders talked about the adaptability of chickens to the Master of gray to the new conditions, they are not cunning. This bird is really low maintenance. However, for its normal growth and good egg production, she will still have to ensure minimum conditions of detention.

Therefore, the coop should meet the following requirements:

The walls and ceiling of the poultry house should be whitewashed. All premises should be regularly disinfected with special solutions.

Description of the diet

From the first days of life of Chicks of this breed are fed boiled eggmixed with boiled millet. A week later, they are transferred to bird feed wet mash.

By and large, these chickens have no special diet. They can be fed the same feeds, and other poultry.

The basis of the diet of the specimens the grey Wizard should be:

It is very important to add to feed foods high in calcium. Usually to replenish this mineral in the organism of chickens, the birds in the feeders spiked shell and crushed shell. If this is not done, the hens will begin to compensate for the lack of calcium in another way: to rasklinivat the shell of eggs laid.

We should not forget about vitamin supplements. If they do not give, it may lead to a loss of poultry. Such cases are not uncommon on farms where poultry farmers forget to feed the chicken flock with vitamins.

Vitamins it is best to give up of specialized feed for the birds. They usually contain everything necessary for the normal development of the minerals and vitamins.

Given the fact that the price of these foods is small, their purchase is not heavily hit on the family budget. Besides, good egg production and quick weight gain will quickly offset all the costs.

Some farmers to prevent beriberi in the chicken flock is recommended to feed the bird with chopped nettles.

To reduce the cost of feeding chickens the Master of gray is, if you provide them with a paddock. An aviary for these purposes is to build on site with lots of herbs.

Making a diet for this bird, we should not forget that during the moulting period and in winter it cannot be added to the feed barley. The fact that this grain is much weaker birds.

Master grey is a breed of chickens, characterized by excellent productivity and fast growth. Due to the low requirements in terms of content it beneficial to keep on a personal farmstead. However, to fully enjoy the breeding of these birds will not work. Have every year to buy young animals or eggs to replenish the population, because these crosses are impossible to grow at home.

Buying chickens of this breed, you should be careful. The fact that in recent times under the guise of the Master of gray , the scammers sell unknown hybridsthat do not have good growth and egg production. Experienced growers recommend to make purchases from reputable farms.

One Comment on “Chickens Master gray: detailed description of the breed”