Although at the moment it is easy to count up to a dozen types and breeds of chickens which differ high productivity, however, long been a popular types of chickens don’t lose their relevance in agriculture. Such poultry are chickens of Leghorn. They have long been known worldwide for its outstanding characteristics. And even more, nowadays they are extensively used as genetic material of one of the best sources for reproduction of new breeds of hens. 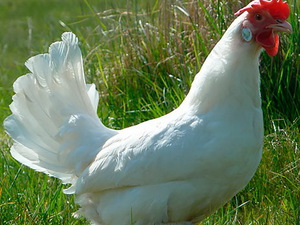 This breed takes its roots from Italy, but it is widely distributed outside of their country and its foreign origin has long been forgotten.

Probably because all the characteristics of the Leghorn hens were obtained by crossing breeding as the improvement of the breed did not represent special value. Moreover, such measures to improve the quality of the breed and is performed by specialists at the moment.

On the genetic basis of these chickens has received a great number of new species and subspecies. And they continue to gain popularity.

The settings and appearance of Leghorn 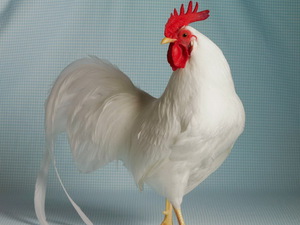 During the long years of selection and breeding of this breed of chickens was received various types including color. But still, the most common of Leghorns in our region, this species breeds with white color. Besides, for this kind of poultry white color is the most characteristic

However, if you happen to meet the chickens:

they with the same success can be the same Loggername.

If you do a physical description, then they all will be characterized by: 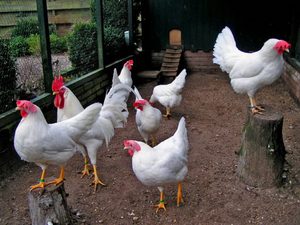 Such productivity indicatorsas fertility, egg production and preservation of young cattle of this breed are very high.

Chickens of this breed, as a rule, those owners of individual farms that expect to receive from them only eggs, making special emphasis on meat. In measures of egg production of these chickens are the real Championsbecause the indicator of their performance in this area equal to 300 eggs per year.

Especially a nice surprise for these pet birds to their owners that these indicators they will be able to provide in the first year of their life. When you buy a chicken-a female of this breed, in a year you can get 300 eggs per year.

Also a major advantage is that the eggs of young hens will begin to carry already with a 4.5-5 months of his life, in other words, from the time of its maturity. As to the quality of the eggs, this breed is the fact that they have it rather large, 55-70 grams. The eggs are white, and if sufficient and good-quality hens ‘ diet is very hard.

Fertilization of the eggs of this breed is very high, that is, any of them may wish the owner to be either just egg or chicken future, without cheating expectations. In numbers, the rate of impregnation capacity is 95%. However, the level of brood the Chicks while the figures are somewhat lower, though generally high – from 92 to 93%.

The downside of this breed is too low live weight, so meat, this breed of chicken are practically not valued at the livestock market. Under the most optimal conditions (abundant food base, living conditions, etc.). even upon reaching adulthood individuals can weigh no more than 1.5-2 kilograms and the maximum weight of the males of this breed can reach no more than 2.6 pounds. In addition, this breed is not cold. For example, to boast of such richness and tenderness, as in poultry Kuchinsky anniversary of the breed, she can’t.

The breed is very beneficial not only with regard to a large number of eggs of high quality, but also easy to care for. In particular, they are rather phlegmatic in his behavior, not fussy, and generally not flashy. In collaboration with the person very friendly, quickly adapt to the living conditions, used to his breeder, not fearful. They quickly produced a conditioned reflex between the appearance of the host and the appearance of food in the feeders.

Moreover, despite its foreign origin from a warm climate, chickens very well acklimatiseras to a range of environmental and temperature conditions and has a positive carry everything from the hottest to the coldest climate. Chickens of Leghorn, in General, differ frost: frosts in our region rarely can have a negative impact on their health, and this distinguishes them favorably from other competing species.

Exposed areas of the body of Leghorn chickens ( comb and legs) rarely succumb to frostbite. But you should be aware that this is not a reason to abandon them to the mercy of weather conditions in an unheated shed. The insulation of the premises for poultry is always a good thing, also in more favorable conditions, birds will be more productive. 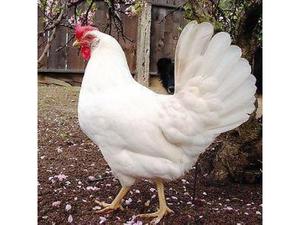 Although in General the figure for Leghorns very high and is maintained throughout the life of laying hens on quite satisfactory level, 2 year carry eggs it drops sharply, but compared to other breeds this figure is still quite high.

However, poultry farmers, knowing about the potential of young chickens of Leghorn the reduction of this parameter to the performance metric to 150 eggs in a year thinks he is just catastrophic.

For this reason, holders of private farms and farms prefer every year and a half to replace “spent” his productive period chickens new young individuals and old ones to use as meat.

The question of reproductive capabilities of new generations of Leghorn is also quite problematic and even paradoxical. For example, despite the high level of impregnation capacity of eggs and vyvodyaschy of them young, the process of hatching is productive only through the incubator, or by putting the eggs of the Leghorn breed. other breeds of chickens. The reason is that the instinct of incubation, this breed is literally completely lost. That is, if at least one hen available, say, 50 wants to give birth to a new generation, the probability of preservation of the offspring would be quite low.

Description of other varieties of Leghorn: the most productive and popular

White chicken Leghorn of – a-kind not the only one. They were used as basic genetic material, which was produced and other, not less productive subspecies chickens.

Therefore, if the bird you caught the eye of Leghorn different colors, it is recommended to pay attention to them.

This breed of poultry also applies to egg mind. A distinctive feature of the brown Leghorn is put in terms of sexual dimorphism in the colouration of their plumage.The most glaringly different males because their neck and back covered with glossy feathers, a characteristic Golden-red hue. In this case, the remaining part of the body is black in color with a distinct green metallic sheen. The female is painted more modestly, the colors are not as saturated as roosters.

This kind of breeds of chickens of Leghorn refers to autosexing birds, in other words, their sex can be distinguished already in the first 24 hours after hatching from the egg. If you do a physical description, then the male should be distinguished by a lighter colour fluff. This breed of chicken is very easy to maintain, because just as unpretentious and viable as that of white Leghorn. This bird is very active and agile, she has a very friendly personality.

Sexually Mature male and female differ by size and colors. From the point of view of laying eggs with the usual white shell, hens of this breed is very productive. However, eggs rarely reach large sizes, medium sizes. The instinct of incubation they also underdeveloped, as the white Leghorn. They weigh a little more the above-described breed, but nevertheless, the adults rarely weigh more than 3.5 kg. We can say that this is the maximum mark.

The Leghorn Golden — a combination of beauty and productivity

Beautiful Golden color and small body size make them to some extent, almost decorative, but they are in addition to all his other virtues quite high productivity. For example, in one year, one a laying hen lays on average 240-270 eggs. Thus, the weight of one egg can vary from 59 to 65 grams. The shell from the egg white.The male Golden, and white Leghorn, weigh on average 2.3 kg, and the female is 1.8.

The Leghorn spotted the most pure breed chickens.

Why this breed of Leghorns is considered clean? The answer is simple: it emerged almost completely independently, without the intervention of breeders, and so on. Even during the period of particular prosperity breeding research it is no longer mixed any more with any other breed. Perhaps this is why such an unusual color in General, breeds of chickens characteristic exclusively for Leghorn, because the combination of white and black they have dominated the white.

Egg production in laying hens speckled, and the white Leghorns very high, about from 220 to 260 eggs per year. Like all Leghorn, these chickens can’t boast outstanding characteristics weight: this index varies between 1.8 and 2.7 kilograms and depends on the sex of the bird.