Every year more and more popular among poultry farmers gains breed Orpington chickens. Many fans representatives Orpington intriguing in their appearance. Individuals of this species are egg chickens and meat direction, are of high productivity by the number of eggs and the output of meat. Before you buy these Pets, you should learn about the features of rocks and their conditions of detention.

Breed Orpington chickens were first bred in England. The Creator of this view was William cook, residing in a small English town called Orpington, in whose honor and was named a new breed of birds. Work on the selection lasted more than 30 and ended after the death of William cook. The result of research and experiments was the appearance of individuals that satisfy the sophisticated requirements of the English aristocracy.

The main requirement for the output species was the presence of white color carcasses, as, in the opinion of a true British bird with yellow skin is less attractive. Initially, the first Orpington chickens had black paint and feathers, and the crest from different species could be of any coloring. Representatives Orpington immediately became the darlings of the poultry farmers, as they have a high productivity and an interesting appearance.

The result of further work on the crossing was the appearance of yellow coloring in the birds, and specimens with this coloration came to be called Orpington fawn. In the beginning of XX century the breed was exported to Germany, where breeding was obtained the red coloration of individuals. Just two decades ago were bred chicken Orpington with the white color of the feathers. 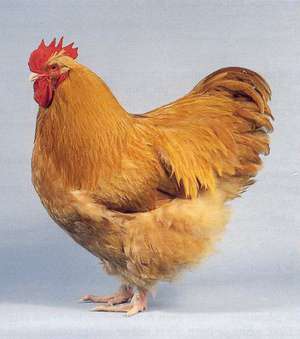 Specimens Orpington impress at a first glance its power and solidity. The body of the specimen strongly resembles the shape of a cube and covered with loose, rich, rather stiff feathers. Small birds adorn the top of the straight comb leaf-shaped and has a rounded shape. Neck species has a curved shape and is decorated with a lush mane.

Chicken Orpington reminiscent of a rooster in a reduced form and have a more rounded belly. Specimens have a mild and calm disposition, well adapted to different conditions.

Characteristic of the breed and dignity

Experienced poultry farmers appreciated the high productivity of the breed Orpington. Representatives of this breed have a high performance meat yield and the average yield of the resulting eggs.

The net weight of the Orpington rooster is from 4.5 to 5 kg, and the weight of the chicken — 3.5 kg to 4 kg. Average annual number of demolished chicken eggs varies from 160 to 180 units. The maximum egg weight is 60-62 grams, which depends on the state of birds and the conditions of her detention. Each egg has a pretty durable shell brown. Every year the rate of egg production in birds is reduced by 15-20%, so every 4 years it is recommended to carry out regular replacement herd.

When calculating the rate of consumption turns out that one egg has 270 grams of dry food. If possible, walking birds this figure is reduced by 1/3.

The benefits of a chicken breed Orpington considered:

The disadvantage of the breed Orpington believes very slow growth of Chicks. The chicken breed Orpington grow significantly slower compared to broiler. The Chicks are very voracious, and therefore, their proper growth will require significant investment to ensure an adequate amount of balanced feed.

What are the different kinds

Following are a sustainable species of birds breed Orpington:

Where and how to contain

As a characteristic feature of the chickens Orpington is their heaviness, there are a number of requirements to the arrangement of their place of detention. In winter, the birds are kept on deep litter which is not changed during the entire cold period.

The fabrication process of litter as follows: 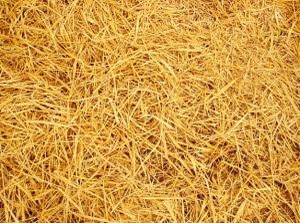 As the bedding material can be straw, hay, sawdust, or fibrous peat. In winter, these materials will heat up the floor from the inside by bacteria. Litter should always be dry, so the process of storing material begins in the summer.

The main rule to the content of the Orpington breed is to maintain the proper condition of the upper litter layer, and timely cleaning dirt and replace it if necessary. Wet litter can be a potential threat of infection of birds by different types of infectious diseases and parasites. To prevent infestation it is recommended to do the sand-and-ash bath.

The optimal temperature for poultry is the mode 13-14 0 C. specimens Orpington show better performance when the content in the aviary and the possibility of walking. Lack of fresh air affects the ability of roosters to fertilize the eggs.

Most farmers do not aim obtaining purebred, so when together representatives of different breeds make assorted chickens. 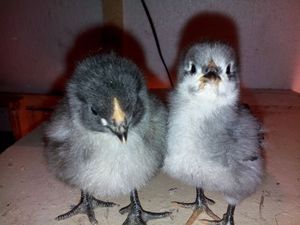 Despite the fact that the Orpington breed belongs to the large birds, the Chicks of this breed are born quite small. Each chick weighs on average no more than 40 grams.

The main disadvantage of the Orpington breed is considered a very slow growth of Chicks. Set the total weight in the first month of life is only 800 grams.

At the initial stage of life, Chicks require the owner to carefully monitor the nutrition of children.

The composition of the food shall be:

When the Chicks aged 4 weeks in the diet of nestlings gradually introduce high-protein types of feed. In General, the conditions of detention and care for the Chicks meet the standard requirements.

Adults are able to get food, but only in the warm season and during the existence of the paddock. The task of the owner is timely providing birds with plenty of food in the form of feed or a mixed menu.

In the mandatory part of the menu should include the following elements in the calculation for each individual:

The total energy value of 1 kg of food must be at least 2 900 kcal. To avoid zataplivaja feed it is recommended to place the trough in an elevated distance from the floor. The best location for feeders for chickens is considered to be located 2 or 3 cm above the level of the chest. For the roosters this level should be higher than 4 cm In the diet of hens must be present additive in the form of shell eggs.

A bird shall be provided enough water for drinking. The best location of the drinkers is finding them on the Breasts of chicken. During the heat of the water in the drinkers is subject to frequent replacement, which should be carried out at least 3 times a day.

In order to prevent the bird are introduced into the diet antiparasitic and anthelminthic agents. With proper maintenance and compliance with the necessary conditions of the breed Orpington rarely get sick.