Oryol breed comes from the “bearded” and fighting the Malaysian chickens bright color. In the early seventeenth century birds came from Iran to Russia. Active participation in the breeding of the new breed took the count A. G. Orlov-Chesmensky. 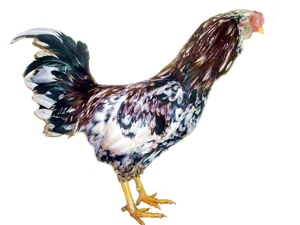 In Soviet times, restoration Orlov chickens was made by famous breeder M. Vinokurov. For the formation of orlovskih chickens high productive performance they have been crossed with Russian varieties: Turin, buggsie chickens and breed the Russian ushanka.

The appearance of the Oryol breed chickens 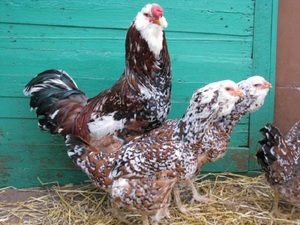 From the Malaysian chickens Oryol different beard and elongated, bushy tail. Earlobes and earrings cocks are poorly developed, and the chickens do not exist at all. Wide neck, short flat crest vertical fighting front makes the males aggressive look, makes them look like predators. The chickens horizontal figure, squat, and the character is calm and balanced. Males –strong, and pugnacious.

The breed is valued for the unusual appearance, bright plumage and the ability to adapt to harsh weather conditions.

Appearance this breed resembles the fight: 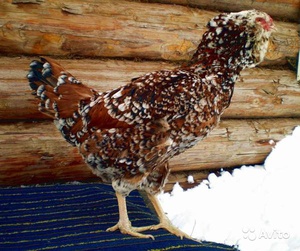 Orel calico breed chickens are the meat types. Their meat is pleasant to the taste, but slightly harsh. It is the similarities with game tried to emphasize breeders, forming the appearance of Orlov chickens. The live weight of the cock is up to 5 kg, the female’s weight is about 3.6 kg.

Oryol calico hens are productive hens. Egg weight is in the range of 56-60 g, shell on a white or cream shade. Annual hen can lay about 160 eggs. In the future, egg production drops, so Orlov is not used on an industrial scale.

The positive qualities of the breed 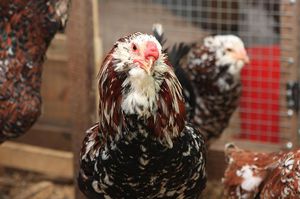 The positive qualities of the species include:

Negative qualities of the breed

In Orlov chickens have negative traits that do not contribute to breeding of the species in the poultry industry: 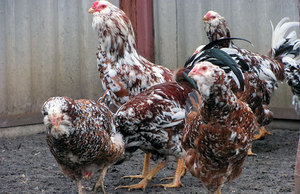 When breeding should monitor the appearance of chicken and choose for this purpose only the appropriate individuals:

What birds are not suitable for breeding

The breeding birds have:

For those who want to try to breed a calico chickens independently, experienced farmers suggest to incubate the eggs to take a two-year chickens.

There are two subspecies of orlovac German and Russian. Birds German selection of slight build, have a straight beak, a small weight. Body they have short, broad, slightly elongated upwards. Well-developed brow ridges. The tail is set on back at right angles. Growth low, about 55 cm, Such external conversion had a positive impact on the productivity of the breed. Chicks German varieties are easier to grow, they are not so dependent on conditions. For natural signs, the German print apply black and white pen color.

Cocks Russian subspecies have plumage is light brown or clay colors with a red tint. All of the bird’s body is covered with white spots, which can be found on the black feathers. At the end of the pen is marked white portion. The wings of a bird distinguished by unusual color: a “mirror” stripe of black with green specks. On the black tail nobly distinguished the white edging.

Oryol calico hens and cocks have almost identical color, but color of females slightly lighter. Across the surface of the tail located the white blotches with thin strips of black color.

How to keep and care for chickens 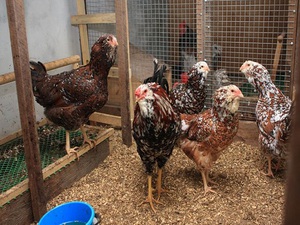 Birds tolerate the Russian frosts and cold, but to get from chickens the maximum productive impact, to create for them comfortable conditions. Their locations should be dry, without draughts.

Roost for birds equipped at a height of over one meter from the floor. Nests made of wooden boxes or baskets. The bottom is littered with straw.

Males of this breed are pugnacious, so desirable to the neighborhood along with them there were other types of birds. If necessary, you can keep chickens in the aviary or cage. Oryol breed need long walks, is good for the health of birds. Installing feeders and waterers, it is necessary to consider the shape of the beak of this species.

To determine the composition and regulations of the food for the birds just because they are unpretentious.

In addition to whole and crushed grains, food can vary:

You can use sand, gravel and mineral supplements. The drinker should always be water.

When breeding these birds need to prepare for the challenges of: chickens need care and attention, they are often sick, prone to infections.

Purchase Chicks or adult birds Orel calico is also difficult. These beauties can only be found at pristavochkoj, enthusiasts, connoisseurs of ancient Russian breed.