Increasingly popular with farmers is the breeding of rabbits. These beautiful and fluffy animals very quickly multiply and grow, bringing its owner a tasty dietary meat. In our country today there are more than 20 breeds of rabbits. Half of them belong to the beef. Many managers of cafes and restaurants will gladly work with the owners of farms whose main line – breeding. After all, this fluffy animal meat very juicy and tender to the taste with excellent nutritional properties. 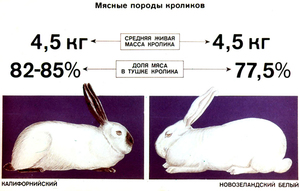 The need to increase rabbit meat production in modern conditions has led to a change of the technological process of growing rabbits. If before the meat was considered the only large breed of rabbits, now the preference is given to growing rabbits for meat production – broilers. Such rocks, despite their much lesser weight of the carcass, actively replacing giants. The increase of production is due to the fast turnover of breeding animals.

As you can see the division of meat rabbits in large and early, it will be considered more accurate than the division in the directions of the resulting product.

General characteristics of the giants 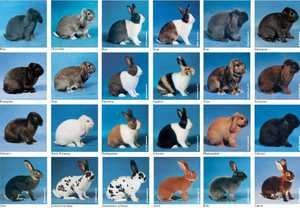 Representatives of these breeds are very similar to each other. Average meat yield is 60%, and live weight starts from 5 kg. to Rabbits less weight from the breeding flock shall be rejected. Mostly giants weigh 6-7 kg, but sometimes can reach 8-12 lbs.

All giants have a well-developed croup with powerful rear paws, in these places and the bulk of the body. Torso length from 60 cm to 75 cm. the Head is large and wide, has the proportional characteristics against the body. Cheeks are brightly expressed, well developed, well marked.

Some inexperienced breeders believe that the breed of giants is more profitable because of their large size.

However, this opinion is erroneous, because these rabbits have a number of drawbacks:

The positive qualities of giants is their calm disposition, good survival of bucks, excellent maternal qualities.

The contents of the giants 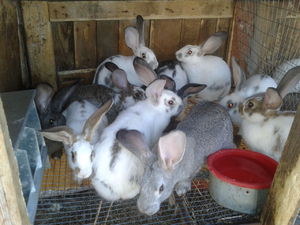 Paws from the giants poorly protected by hair and therefore, when a large weight, perhaps the appearance of foot to me. Because of these problems the giants rabbits can live in cages with mesh floors.

Optimal content of giant rabbits is considered to be the outdoor enclosure, the size of the usable area of such enclosure should be more than normal rabbits. For good living conditions for animals of large breeds, they require a living area of 100×110 cm on one rabbit, and that rabbit with the kids cage area is necessary to increase 1.5 times.

The owners of the farms growing giants in their content in the shedov (a certain number of cells, arranged in a bunk battery) should care to protect the paws of the rabbits from scuffs. For these purposes often are created on the floors of wooden planks. Besides the increased size of the cells, their height should be not less than 60 cm.

It is very important to regularly clean the cage from dirty bedding and to carry out its disinfection that helps prevent diseases in the rabbit hutches.

A balanced diet enriched with protein and carbohydrates, is an essential source of nutrition for building muscle animals. Youngsters, grown for breeding purposes, intensive feeding is optional, therefore, the basis of their diet is hay, consisting of herbs rich in phosphorus and calcium. But for beef herds is necessary in the diet to include concentrates, i.e. grain.

Some farmers prefer to include in the diet whole grain is the richest in carbohydrates (corn, barley). But many breeders prefer a balanced feed that can be cooked on their own.

The composition of feed it is necessary to dignify the following components:

The hay in the feeder, the rabbit should be constant. The most calcium rich alfalfa hay.

The breeding of giant rabbits

All members of giant rabbits are late. Therefore to reproduce their permit until age 8 months. In the case of rabbits kept for the development of the breeding herd, cases, they are preferably from 10 months of age.

The average one breeding female rabbits of these breeds are worth 10-12 bucks. If the captive breeding of rabbits of meat breeds on the floor, you must lay a thick layer of hay, because hay and build nests rabbit to output offspring. The ideal option is a mixed litter, when the top layer of sawdust is spread a layer of hay or straw.

To broiler breeds are rabbits strictly for meat. The breeding of broilers is very easy and today it is the best meat breed rabbits.

Features of the content and the diet of broiler rabbit breeds 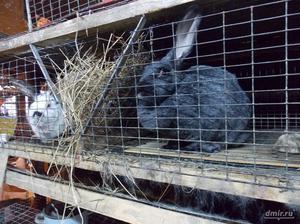 Rabbits broiler breeds can live in any climatic conditions. They are considered hardy, so they can be kept year-round outdoors in a cage.

Broiler rabbit breeds can have 3-5 year of kindling, bring 8-10 bucks for one breeding. Females have well-developed maternal instinct. The presence of a large amount of milk for rearing young allows the female broiler breeds grow even other people’s rabbits.

Rabbits of broiler breeds are undemanding to feed. But to satisfy their meat quality the full diet should be balanced. It needs to include complete feed, hay and water. The hay should be applied to power year-round to eliminate the transitions from one food to another in the offseason. This diet allows you to avoid frequent gastric diseases. In addition to the feed you need to give the oil meals, oil cakes, meat and fish meal.

Broiler rabbits are perfectly suitable for cultivation in the country. The optimal option of breeding if you have females of the new Zealand or California red breed and the male is white or grey giant. Each female during the summer season are able to give two offspring. The youngsters in the three months from birth can already start to slaughter.

Remember, that purchasing of rabbits for breeding should preferably take place at specialised breeding farms or from experienced rabbit breeders.