Since the end of XVIII century Russian farmsteads began to appear mottled pavlovskie chickens, they were called in the people “lemmings”. At the moment it is, unfortunately, almost extinct breed begins to gain popularity again in modern poultry breeders.

Disadvantages of the appearance of the Pavlovsk breed of hens 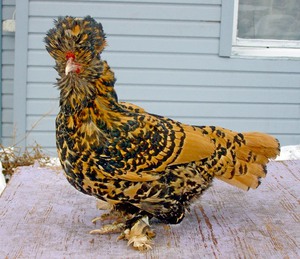 If a breeder is interested in the exhibitions, the description provided below, will help him to correctly Orient in this matter.

Bird show Berkovitsa, if not detected:

Physique, colouring they are the same as the old chickens, but differ only in the characteristics of males:

Description of the subspecies breed

The main color of the pen the poultry — white.

Has a Golden-brown plumage. At the end of the feathers are brown color flows into the black and thus forms a border that moves with the crest and neck to the shoulders, back, bird and her lower back, forming a stylized letter V.

Feather wings and a protective outer feathers of the tail spotted the colors, and feathers of the first order on the inner side of the characteristic brown and Golden colors, with the outer dark.

A bit of history 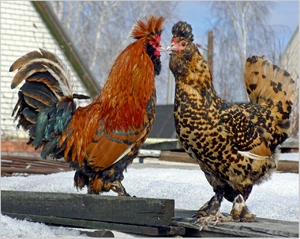 Chickens-bats with atypical plumage and legs as the wood impressed the traveler P. S. Pallas, who travel through Russia in the late XVIII, met them in the Nizhny Novgorod region in the village of Pavlovo, then made them a detailed description.

In the 19th century exhibition of achievements of agriculture pavlovskie chickens have repeatedly been recognized as “Royal” and always confirmed his already established status as the best national breed. But in the late 19th century interest in the decorative is significantly reduced, and after 1917 of Pavlovskaya breed was completely lost.

Only in the last 20 years of the last century century measures were taken to revive the reference Pavlovskaya poultry. This had to make the effort, but still La fresh breeders are eventually able to achieve goals through interbreeding of chickens Sultan,Dutch breeds ,as well as faverolles.

Advantages and disadvantages of the breed in General

The advantages of breeders include simplicity, decorative, low feed intake, high levels of safety of the young, fast atrevemos, high taste like eggs and meat.

The disadvantages include a high level of probability of buying chickens impure breed, a rather low productivity.

Characteristics of Pavlovskaja hens from the point of view of performance

Modern pavlovskie chickens belong to precocious decorative panel of this kind. But, given the relatively high egg production, fatness, good preservation of young animals and vyvodyaschy, this breed can be described as meat-egg breed.

Pavlovskie chickens bred in private farms, household plots, farms, rural homesteads. Characteristics of the breed and testimonials of farmers can be viewed below.

The main characteristics of the breed

The figure they reached average. In the year of Pavlovskaja hens you can get 120 to 310 eggs. Shell color varies, can be white, cream, beige. Eggs are oblong. Weigh 50-65 g.

At Pavlovskaja hens notes developed maternal instinct. As a consequence, the safety of chickens exceeds 93%. Aware of the positive characteristics of Pavlovsk hens, poultry farmers often enclose them for baby-sitting of not only other species, but sometimes species. 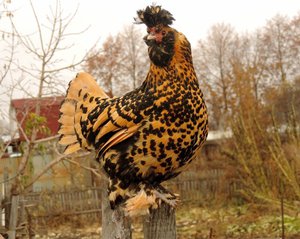 Hens do not distinguish between friends and foes, use it in order to increase “productivity” and keep control of the place of hatching. Order hens lay offspring in unknown places, their nests lay even the white stones–”obmanite”.

Pavlovskie chickens are activity. They are agile, love to run. A distinctive behavioral feature of fussiness. For Pavlovskaja hens is characterized by the ability to fly over obstacles, during the flight to change direction.

The roosters of this breed are very snooty. But contrary to this trait of the males hens of this breed generally get along good with other kinds of birds — geese, ducks, Guinea fowl, turkeys.

Also these birds are trusting and friendly. They are very attached to the chicken coop, so do not attempt to escape.

Will be quite appropriate, considering the warlike character of the cocks, to isolate them in the chicken coop.

The range or chicken coop

Pavlovskie chickens unpretentious. The expense of rich, dense plumage, the high mobility and activity of these pet birds can withstand temperatures of our region in an unheated, but protected from the wind by special buildings. But of course, it would be better to provide them spacious, warm, heated and well-equipped chicken coop.

Cage hens suffer badlyas the limitation of space. Since the activity – their characteristics, it is necessary to provide regular walks.

In the warm season of being in the barn should be reduced to a minimum and send the birds to the yard until the evening.

The arrangement of the henhouse

The room for these birds should have an area at least 3.5 m2, and a height of approx. 2 m. a window or Windows.

Feeders should be regularly washed. Optimally, if there will be leg, then the chickens will scatter feed less.

Pavlovskie chickens are markedly different from other egg-meat and just meat breeds very low feed consumption and flexibility to the diet. In the summer they cost pasture: herbs, worms, insects.

In winter they have no problem going to the winter routine: 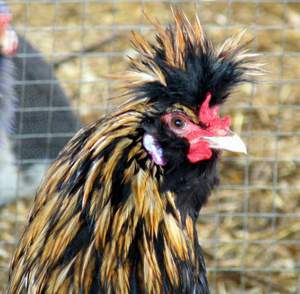 With the right feeding one chicken Pavlovsk Pavlovsk breed will take only 50 g of feed per day.

To make poultry vitamin mix, you need to chop a carrot, raw potato, nettle leaves, the fruits and vegetables (can be dry). You can add white bread, bran, salt, chalk, fish and meat flour.

In the cold season 1/3 of the diet should be exactly solid food. Remaining part of mash.

For the daily diet of laying hens of the Pavlovsk breed required:

Chickens, from which you expect the receipt of eggs for breeding pullets, and hens, it is necessary to calculate more protein feeds and vitamin complexes.

Feed a protein called the following specialized types of flour:

And also the following products:

On the third day they can begin to give fresh alfalfa, clover, nettles, boiled potatoes, carrots.

On the fifth day the youngsters need to give dry and wet fodder, animal and dairy feed, carrots, yeast, pine and grass meal, tops.

An indication that feeding is successful, is a good of filling Sabekov Chicks by the end of the day.

From the balance and diversity of forage issued directly depends on the safety of the Chicks, and their rate of growth.

Chicks are fed on the tray. Put a drinking bowl, put in warm milk or hot clean water.

Caring for the chickens of the Pavlovsk breed 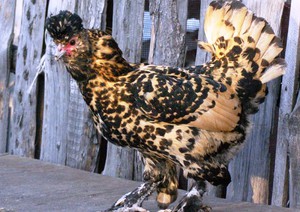 Chickens of the Pavlovsk breed of fluffy, they will quickly fledge. Newborn Chicks are mottled, dark color.When the Feathers just begin to grow, they have gold or silver in a black speckled colour.

To carry out the breeding of chickens, first select the eggs, not weighing less than 60 g. Breeding chickens is or under a hen or in incubator conditions.

Pavlovskie chickens, as mentioned, a very caring mother hen. They warm the Chicks, and wrapped them. Teach finding the feed, see to it that the chickens don’t get lost.

If the Chicks are displayed in incubator conditions, the wall is a special place.

The incubator must be installed heaters:

It is important to monitor the behavior of juveniles. When the temperature is comfortable, they show no signs of trouble, eat well, don’t cling to each other.

If the temperature is insufficient for them and they are cold, they lose their appetite, begin to crowd near the heat source, to climb on each other, trample the weak.

If there was overheating, then it is easy to understand to solve the beaks and frequent breathing Also they are spreading wings, often lie, refuse to eat.

All the individuals of the Pavlovsk breed chickens resistant to diseases and cold. By abundant in warm season green feed different strong immunity. Poultry farmers who have large livestock, if vaccinated, then the diseases of Marek, Gamboro, Newcastle.

One Comment on “Pavlovskaya chicken: a description of the breed”