Many poultry farmers are often faced with the problem of rasklinivanie and eating chickens eggs. 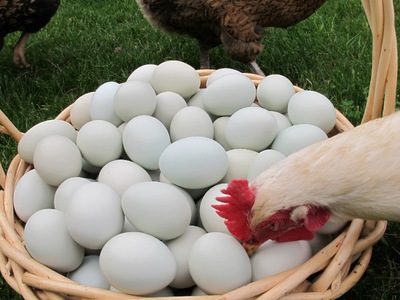 Such a deviation in the behavior of birds is very common for owners can be a real disaster. To correct the problem and prevent its occurrence in the future enough to know the basic reasons of such behavior of Pets.

The most common reason for pecking chicken eggs is considered to be a violation of the feeding birds. The other category of reasons related to the breach of the conditions of the Pets.

The reasons why chicken can rasklinivat eggs, are:

To find the cause and figure out why the chicken began to rasklinivat their eggs, you need as quickly as possible. If the bird tried the taste of the shell, it will set an example to the rest of the chickens. For this it is necessary to perform the poultry diet, the conditions on the adequacy of the range, floor space, density of Pets, the arrangement of the nests.

To address the problems are the following:

Unbalanced nutrition is the most common reason for which the bird begins to peck at their eggs. Homemade food hens must be very diverse and most nutritious, then the temptation to rasklinivat their eggs the birds will not.

Protein is one of the most important elements. As a source of replenishment of the content of the element in the body of a bird can be a meal, canola, animal products, waste fish, amphibians.

Fats are the basis of the energy content of chickens. The delay elements occurs in the subcutaneous layer and it is possible to assess the adequacy of fats in poultry diet. The main source of fat is considered a grain, oats, corn.

Carbohydrates are involved in all processes of life. The formation of muscle tissue depends largely on the adequacy of carbohydrates. To replenish the item in the body of a bird used potatoes, beets and grain.

Minerals are responsible for the maintenance of hens and participate in all processes of the body poultry. A rich source of minerals is considered to be chalk, flour of animal origin, shells, wood ash. 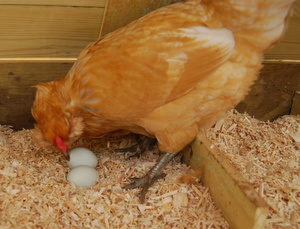 Violation of the diet is the most common cause hens pecking their eggs.

This reaction for chickens is a natural and serves as a response to shortages of certain components in the diet. To solve the problem, you must identify and eliminate the root cause of occurrence of deviations in the behavior of chickens.

Very often the problem is related to poor quality feed.

It is not recommended to do in advance a large quantity of fodder, as the bird is not able to eat the given food, so it is souring. Wet, spoiled food cannot be used for feeding birds.

For the beginning of the solution the owner should analyze the adequacy in the diet of chickens protein and minerals, the food contains the required amount of these components.

In most cases, the bite of eggs stopped after the introduction in the diet of pet animals and products of animal origin:

As an additive to feed chickens it is recommended to add dried nettles and wood ash. In place of walking it is recommended to place an additional feeder with coarse sand or gravel. A positive effect on the digestive system provides an introduction of limestone and chalk. If the introduction of these components in the diet of birds started to peck at the offered products, then with high probability their is a shortage and caused the bite of eggs.

Effective use of special feeds and premixes that contains enhanced complex vitamins and minerals. The absorption of additional elements happens during the week, after which after the change of the nature of power, the biting must stop.

A more radical way to eliminate the deficiency of proteins and mineral substances in the organism of chickens is considered the introduction in the diet drugs:

In winter, hen experiencing a serious lack of vitamin D, which is important for proper metabolism of calcium and phosphorus in the body of a bird. In the summer of this vitamin is produced under the influence of ultraviolet rays in the winter the lack of them leads to a deficiency of vitamin D.

Signs of deficiency of vitamin in the body of birds is the appearance of the following symptoms:

The problem of lack of ultraviolet light is easily solved, since it is sufficient to install an ultraviolet lamp in place of the birds.

Very often the owners themselves provoke Pets, periodically feeding them the remains of the shell after the use of eggs as food. This food affects the behavior of the chickens, as they get used to the smell and taste of the shell and begin to perceive their own eggs as a source of delicious food. 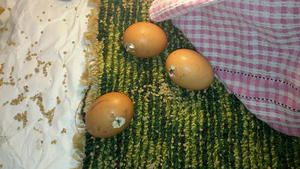 Biting your eggs may not be associated with malnutrition and deficiency in the diet of any substance. The cause of the problem can be stressful due to lack of range. Natural need for chickens is a demand for constant walking and looking for food, grasses, insects, small stone. The lack of range or lack of area leads to the fact that chickens become aggressive and peck at their eggs.

To solve the problem, you need to provide the chickens enough space walking. In case of impossibility of arrangement range, it is recommended to release your Pets for walks in the yard. Over time, this will reduce the level of aggression and chicken stop pecking eggs.

Wrong device socket can also be one of the reasons fish eggs. Do not place nests very close and do his shining, long-lasting illumination, as in this case, the bird begins to behave incorrectly. The lack of space in the nest leads to the fact that the chicken crushes its own egg and begins to eat it.

Popular ways to eliminate fish eggs chicken known since ancient times and are very popular because has proven its effectiveness.

The procedure is very often used on large farms, and poultry farms to rid the hens of the habit of pecking at eggs, to tear out feathers and pecking at each other. When debugiranje is cutting the end of the bird’s beak with a special tool. At home pruning can produce a sharp side cutter or saw cut the end of the beak with a file. This procedure is recommended for the hens at a young age, because during this period the stratum corneum of the beak is not yet fully formed and cutting spending easier. After trimming the beak is needed to cauterize the cut hot metal. 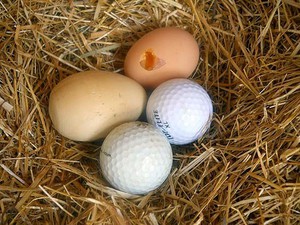 An effective antidote against the bite of eggs are considered the putting in place content about eggs. In the mountain you can use an egg made of plaster or a regular ball for tennis.

Some poultry farmers for cheating birds egg is made from firm dough and dried it in the sun.

Particularly sophisticated owners fill the egg with special filling, which is very not like the taste of chickens:

The bird quite a few times to peck that egg trick to get rid of the desire next time to try again.

It is recommended to observe the behavior of Pets. Very often a nibble of the eggs is not chickens, but only one individual. In this case, to solve the problem, it is sufficient to catch and eliminate the culprit. That individual is very often located nests, can sit near the hens waiting for the next egg. In most cases, after sending the chicken on the appearance of eggs in the form of a cackling, that individual is his legs carried into the coop.

A chicken is recommended to transplant at some time in a separate room. The time spent in isolation, a positive effect on the behavior of chicken and in most cases, after the return of individuals to the main coop re-recurrence in the form of fish eggs should not happen again.