Grey rabbit Giant is a breed of fairly large animals, which relate to massenstrom direction. Rabbit giants were bred in Poltava region in Ukraine, approximately 1947-1953.

It was quite a significant breakthrough in the Soviet rabbit. From the article, you will learn all about the cultivation and maintenance of these animals.

The history of the emergence

Breed of Giant rabbits result from the mating of large rabbits breeds Flemish giant rabbits of local breeds. The result is simply surpassed all expectations of breeders. From foreign breeds they adopted a large body mass and size. Local breeds of rabbit Giant got the ability to adapt quickly in any environment, easy maintenance and excellent degree of endurance.

Breed these giant rabbits pretty quickly gained popularity not only in Ukraine but also abroad. Of Giant rabbits can be found in the Central zone of the RSFSR, the Baltic States and many other countries. This popularity is not surprising, since even the Giant Bunny in some benchmarks and loses Flandre, but he’s fully adapted to local conditions and contain no difficulty.

Characteristics of the breed Gray Giant

These rabbits giants can have several types of color: dark gray, white, black and iron-grey. A major role in the color of animals of this breed have genes of their ancestors.

In rabbits, Grey Giant, a strong Constitution of body, even it can be noted that a bit rude. The size of the torso in most individuals, often up to 70 cm Maximum weight of the adult rabbit is 8 kg. the Chest is quite deep and wide, is the dewlap. The girth of the chest can reach 38-40 see the Legs are quite thick and sturdy, straight back, long and very wide.

These rabbits belong to the giants leptosoma type because the torso, neck and head length are highly elongated. But at the same time, as already noted, they are mesosternum direction.

While purchasing baby rabbits you need to pay attention to their neck, which should not be light wedge. When it is, you are trying to cheat. You also need to look carefully at the ears of this breed they are the letter “V” and straight.

Rabbits Giants have a huge number of key advantages:

Gray Giant is fast growing. During a proper feeding after 2 months, the rabbit can have a mass up to 1.4-1.7 kg, and on the 3rd month the weight goes up to 2.1-2.4 kg. At the 4th month, the animal already weighs approximately 4.2 kg. Pay attention that the females are all the time easier per kilogram, in contrast to males.

The disadvantages of this breed is not much, but it’s still there:

To the rabbits of Grey Giant you pleased with its fertility and health, you need to provide them with comfortable housing.

They are quite demanding, but still certain rules you must comply with.

It is desirable to feed the rabbits balanced finished feeds. When you want to speed up their growth, the diet should be supplemented with protein. 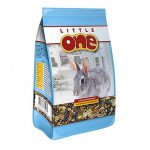 You have to be careful during feeding: underfeeding or overfeeding may quite negatively affect the health of rabbits. Females who are obese or, on the contrary, underweight, often to coition lose all interest. You need to feed smaller amounts frequently.

Don’t forget that a diet must consist of different mineral supplements and high quality feed. During feeding dry food the animals need in water increases several times, because we need to make sure your Pets always have access to a settled and clean water.

Mode in the supply of food is also important, during irregular feeding of animals are often marked disorder of digestion and other disease.

In addition to dry food, daily menu, you can add vegetables and hay. Most important – make sure that the vegetables were no rot and well washed.

Females of this breed are rather prolific and dairy. Over time, the rabbit brings in an average of 6-9 bucks, but there have been cases when their number reached 15 pieces. The obvious advantage is that the females do not eat offspring.

Rabbits are born small, weight of the newborn is approximately 75-80 grams. However, during the right of keeping and feeding the young are quickly gaining ground.

Rabbits have a well-developed maternal instinct, because you absolutely can not worry about the younger offspring.

Before kindling the DOE will need to arrange the nest, she places the newborn. Why in a cage, make a bed of straw or hay, under it poured pine shavings. Only use sawdust, as they hammered in the mouth, nostrils and eyes of newborns.

To prepare for the breeding of Giant rabbits need special way. For a start you need for a pregnant rabbit to find a secluded and quiet place. 2 weeks prior to mating her food enriched with minerals and vitaminiziruet. Tribal are full and powerful individuals, when the female elderly, the male must be active and young.

Before mating, the male gives the grain, oats, or boiled potatoes. Mating usually takes place on the territory of the male, because his cage clean, clean the feeder, drinker and hooked the rabbit. After mating was taking her, but after an hour, put it back to insure.

When the rabbit fertilized she will actively oppose the pairing. Mating need to be repeated in a week. Pregnant rabbit back in the cage and try not to disturb once again. It must be under unobtrusive observation. After 2-3 weeks, you can easily find the embryo, arranged in two rows.

A week before breeding the cage should be disinfected and lay new litter. Then the rabbit starts to build a nest, and then pull out of belly fluff and shoot it from above.

Immediately after kindling is necessary to examine the newborn for the presence of the dead and living babies. In General, pregnancy lasts for 27 to 32 days. The number of droppings will depend on the health and age of mother. The smallest is from the first litter, every year the number of newborns increases, and after three years of decreases.

To to breeding breeding it is advisable to expect for the summer or spring. At this time, many fresh fruits, vegetables, herbs and grains. To slaughter generation breeding it is necessary to rely on fall, in this case, the kids are quickly gaining ground.

The first breeding females of the Giant certainly has to be held within six months after birth. If rabbits overexposed, they quickly begin fattening and bring the small and weak offspring. Males of this breed for the first time are required to mate at the age of 5-9 months.

The desire to mate the rabbit is constant the whole year. In summer, mating may be carried out or night, or day, winter – only day. When the male is young, the number of his followers gradually increased, starting with several females in a week and go to two rabbits a day.

To the cage with the newborn and mother must be approached silently, very carefully, without jerks and sudden jumps. Stay baby rabbits with the mother will depend on what are the plans of the breeder, for the future we need to transplant after 2 months, the others weaned after 40 days.

You cannot pick up infants deaf, blind, and naked rabbits, this can be done only when they are covered with hair and stronger. The next day after birth babies begin to be covered with hairs, after 2 weeks they already see well. The breeder should monitor the mother to take care of children. Most of all, his assistance is not required. He obliged the mother to provide adequate nutrition and rest, with the rest of the rabbit to cope on their own.

Until the age of 3 months is necessary to determine the sexual identity of the rabbits and to separate them in order to prevent chaotic cover young, as a result you receive a defective litter. Males need to keep 1-2 in the cage, after puberty rabbits become pugnacious and each other hurt, because their groups contain.

When the female did not pass the newborn in the nest and scattered them around the cage, and not allow feeding, this indicates that she had a strong desire for mating. In this case, its removed for mating at 8-10 hours, and then return to the place, and she willingly feeds and cares for kids.

In some cases, created a false impression that the rabbit on the young do not care, as she just sits on the sidelines. Just a mother caring for newborns twice a day, coming up on five minutes to them. This happens usually at night (the active period of the rabbits). The fact that it is away from the nest, quite normal in natural conditions the mother is so distracting predators from kids.

The opinion about the fact that females can eat newborns incorrectly. Rabbits are herbivores, eating only plant food. If in the nest were identified toddlers with a damaged belly, it only indicates that the inexperienced female was badly chewed off the umbilical cord.

If the young are injured or severed limbs, it suggests that the mother actively helped them see the light, pulling teeth. When the rabbit head is injured, it indicates that the mother is incompetent he tried to chew off the shell in which newborns appear.

Most often these troubles occur during the first litters, in a case when the mother is not careful or inexperienced. If the rabbit scare, she can jump into the nest, protecting the offspring and accidentally hurt or push kids. During lactation need to very careful with your mother and keep quiet.

The grey Giant is a great rabbit, which is suitable for mass content. Not require special treatment and are characterized by a good degree of adaptability to different conditions. Unlike certain species, the females are quite gentle care of young and suckle them. The profitability of this cultivation is quite high, mainly thanks to the resistance to diseases and omnivorous, and the rate of growth of this breed is the absolute champion is not. The main advantage of the Grey Giant is a good fertility and easy cultivation, and also large dimensions.

One Comment on “Rabbits breed Gray Giant: description and features of care”