Still any half a century ago, the word Achatina was known only to a narrow circle of scientists and… a wide range of planters. First Achatina attracted as the largest of the terrestrial mollusks, the second sought to get rid of them at any cost, as these snails in the tropical edges were the worst pests of fruit crops and coffee. But it is the price, in the end, determined the fate of these amazing creatures. 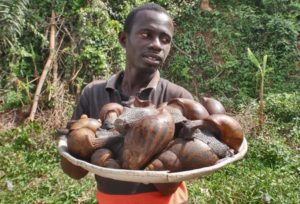 Giant Achatina (Achatina fulica) is the best known representative of the genus and the largest land snail. In her homeland, in West Africa, local populations of these snails produced and consumed.

It all started with the fact that Achatina started to export to Europe — is still only in the low-lying, deli, purposes. The Europeans saw the giants, became interested and tried to breed Achatina in captivity. The fact it was quite easy and interesting. In just a few decades the fashion for the breeding of invertebrates has gripped the developed countries and now it is not uncommon to come across entire clubs lovers and breeders of these mollusks. But best of all, perhaps, is that this case is quite accessible to beginners.

Ordinary varieties of albino Achatina (Achatina achatina albino) among relatives are allocated to the white body. This species, like the forms of some other species, a striking brindle coloring of the shell. However, the brightness, color and width of strips from Achatina is very variable.

Snails, in contrast to the highly organized mammals and birds, require no special feeds, no cells, no walking, no regular communication and understanding of the intricacies of the psyche. However, they are quite durable, economical, almost sick, unable to cope with stress caused by mistakes of their owners. If they have a fault, it is the silence. Buying Achatina, you need to understand that this invertebrate, and therefore quite primitive, animal. Shellfish are not amenable to taming, not able to respond even to the name, not to mention any teams. If you “don’t agree”, give a pet a second life in the wild will not work — thermophilic Achatina will not withstand one winter in the middle lane. So before you start a “Horny” friend, read all the details.

Despite the lining the sole, to take Achatina them with pleasure. Some fans even use giant snail cosmetic massage.

Conditions for all species of Achatina are similar. The optimum temperature for them to 24-27°C, humidity 70-90%. As a dwelling shellfish you can provide a plastic container or terrarium 3-5 liters of volume for one adult. On the bottom of the tank should be laid in the substrate to which snails will burrow to sleep or hibernation. Best suited coconut, sphagnum moss, loose leaf, sawdust of deciduous trees and a mixture of the above. These substrates hold moisture well, but not dirty. Not suitable for ordinary land snail, which they smear badly when crawling, the sand and pieces of bark (water with such a substrate flows down and stagnates on the bottom of the container). Dwelling snails can be decorated with driftwood, small stones, artificial and live plants. You need to consider that artificial plants are a practical, though not quite a natural look, and live plants will likely be eaten facename, so they have to be changed regularly. The substrate and the walls of the home should be sprayed every day, preventing puddles and mold. On top of the terrarium need to cover with mesh so that was a small gap for ventilation, but that the Pets couldn’t crawl out (these shoots often end up falling snails from a height and broken shells).

Every few days the dwelling Achatina needs to be cleaned. To do this, Pets are planted, and the container thoroughly washed with water without detergent; especially well it is necessary to wipe the glass, which remains the slime of snails. Once a week or less, the substrate is washed under running water and dried (bad-smelling can be boiled). Periodically update decorations: driftwood, live or artificial plants. At least once a week Achatina bathe under running warm water (the more baths the better they feel).

Very beautiful shell archachatina of ventricosa (Archachatina ventricosa) — with greenish striations and contrast the tip, the color of which can vary from pink to crimson.

Young snails are fed daily, adults every 2-3 days. Wet food is better to put in a bird feeder, lump permissible to put on a substrate or pinned to the branches. In any case, leftover uneaten food is removed, preventing their spoilage.

Animal food is given not more than once a week, quite a bit. The best will be feeding Daphnia (food for fish), and good lean meat, raw egg.

In addition to organic food Achatina must generously give of mineral fertilizer. Without it, they will not be able to form a solid shell will be prone to injury and in the end will cease to grow. As such an additive, it is possible to use mineral fertilizer to bird or turtle (sold in pet stores), Sepia (cuttlefish shell), and for lack of such high-value products it is possible to do crushed egg shells, ground chalk or limestone. Mineral supplements give at each feeding, sprinkled on vegetables. Practiced this method — the cover of the terrarium sprinkled with water powdered crushed minerals, again carefully sprinkled, the powder had hardened and stuck, and left overnight. Achatina often feed in the dark and at night time to clean the cover from the feed.

Archachatina the standard marginata species (Archachatina marginata marginata) has a pretty contrasting colors of the shell. The other color forms of this species the pattern may be less bright or not available at all.

It should be remembered that periodically Achatina can give up food and go on a few days in hibernation (especially during adverse decrease in temperature and humidity). You shouldn’t be afraid. To bring Pets in a sense is usually sufficient to normalize the regime. If the snail was hiding in the shell is no more than a day ago, it can be used to extract a warm shower, otherwise just wait a couple of days. Dead mollusk emit an unpleasant odor and should be removed immediately.

Like most snails, Achatina bisexual, that is, have both male and female sex organs. However, the pregnant they have is unknown, so breeding is still needed for two individuals. Breeding Achatina “stick together” for some time, in pairs, exchanging sperm. If the difference in size of partners is large, the mother is getting only one of them — the largest, if Achatina of approximately the same age and size, the eggs will be delayed, most likely, both partners.

Since these molluscs are more active at night than during the day, the owners important the time can miss, and learn about reproduction held only when the pet will lay in the substrate balls. Depending on the objectives of the owners it is better to think in advance: it’s one thing when they make snails specifically for breeding and have a database of future customers interested in litter, and another thing, when snails give birth to souls and then not know where to attach the brood. Given the exotic nature of these animals, find them loving owner from among casual acquaintances will be problematic. Also note that Achatina after mating is capable to store long time partner’s sperm in your body, so even a single snail, store-bought, can suddenly become a mother. To avoid such surprises, it is recommended to purchase an immature specimen, and, if necessary, to buy her a pair of always possible.

All kinds of Achatina Achatina except viviparous Craven and Achatina iredalei, oviparous. Eggs, depending on the size of a particular type, with passerine or pigeon’s egg. Conditions of incubation do not differ from the General content of Achatina. About the imminent birth of the offspring show the tiny holes on the surface of the eggs is the kids literally eat their way to the new world. Little snail from the first days eating the same food as adults, just grated or burroway. In the first hours of life, they can eat the shell of their own eggs.

Viviparous iredalei of Achatina (Achatina iradalei), though it belongs to a different genus, superficially similar to archachatina the marginata of candefacta, but unlike it has a light foot.