Achatina – a real giant in the world of land snails, the representative of the shellfish can reach 40 cm in Addition, the snail is extremely prolific: at a time she lays at least 100 eggs, but most often their number is approaching 600 pieces! 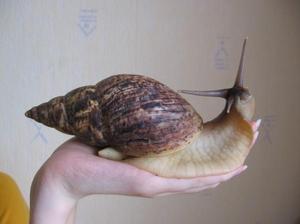 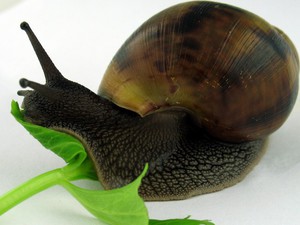 Achatina are hermaphroditic – one species combines the male and female sex organs. The pregnant found, but rarely, usually for reproduction requires two individuals.

Interestingly, in the tropics these giants are pests, causing substantial damage to the sugarcane crop, therefore, their breeding is banned. But in Russia, in natural conditions they do not survive, so Achatina may only be distributed as Pets.

The African snail is the night people, day prefer to dig into the soil and sleep. But often in wet weather they can be active in the daytime. The average lifespan of home of the snails – about 6 years, with good care and cleaning can live up to 10 years.

Achatina African land molluscs of considerable size, with a yellowish-brown shell, decorated with dark pattern. In nature we find about a hundred different types, but most commonly as Pets choose the following snails:

In pet stores most often found Achatina Fulica, due to the fact that this kind of very low maintenance and does not need large amounts of food. 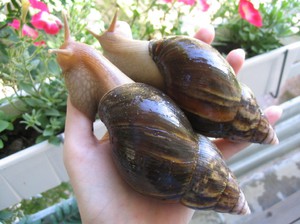 Deciding on the acquisition of giant Achatina should prepare clams housing. The best way to do this, fit an aquarium or terrarium, and should try to ensure a snail free living space is on one individual not less than 10 liters.

Housing should be equipped with a cover, otherwise the clams can escape, but air circulation should make a few small holes.

The bottom of the aquarium should be covered with soil, preferably containing a small amount of peat. The top soil sprinkled with loose sand or coconut substrate. Do not use with lid clay, fat clay loam, rotten bark.

Important! To home-cooked snails did not allocate the abundance of mucus, the soil should be moistened daily using a spray bottle.

To maintain the aquarium to clean the soil on a weekly basis, and complete replacement of the be done every six months to a year, and if Pets much more often. To “house” Achatina looked more interesting, you can decorate it with ceramic decor, to plant some ferns or other plants that do not create high humidity.

The humidity in the house should be about 70 %.

To monitor this indicator, you can purchase a hydrometer, and you can just follow the behavior of Pets:

Very important to maintain the temperature regime from 23 to 28°C, because of the snail – came from hot Africa. However, do not place the aquarium close to an open window or batteries. As a rule, heaters purchasing not required, room temperature is perfectly acceptable. Caring for snails Achatina special problems does not deliver, it will handle even a beginner.

In nature, food for Achatina are green plants: young individuals prefer fresh stems, and rotting remains. While the older Achatina, the more she eats. To shell clams eat dead mollusk shells or egg shells. This knowledge will help to decide what to feed Achatina home. 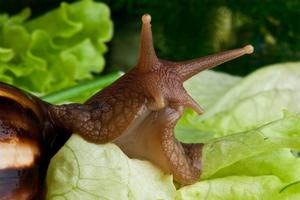 The menu snails can safely add the following plants:

Many snails are happy to regale with cabbage leaves, sliced carrots. To make the diet rich with carbohydrates, should feed Pets or bran cereal. To shell Achatina, especially in young individuals, was strong and healthy, should give them the opportunity to obtain the calcium contained in an egg shell, chalk, also you can buy special mineral supplements for the snails.

Be sure to provide the snails free access to clean water, it will help to normalize the metabolism of mucus. However, the fluid tank should not choose a very large clam drowned.

At a young age Achatina able to form only spermatozoa, oocytes appear only in older clams. If you mate two equal size specimens, the probability of bilateral fertilization. If one snail has a larger size, then it will act as a female.

To produce offspring at home Achatina starting at age 6 months and older, the incubation period can take up to two months.

Important! Wishing to obtain offspring from their Achatina should provide adequate thickness of soil, otherwise they will appear to multiply.

The number of eggs per clutch up to 200, during the year, possibly up to 6 batches. The size of the eggs about 4 mm, the shape they are similar to chicken, the same white color.

Among the most common diseases of Achatina are the following:

The disease is always easier to prevent than to cure, that’s why you should take a complex of preventive measures to contain the dwelling snails clean to prevent excessive or insufficient moisture, to ensure shellfish calcium.