Who do you see in the photo? Like a small yellowish iconage Midge, surely even the blood does not drink, eats nectar. But, no! In the photo — a serious predator which of these gnats for lunch several pieces of eats! It is, indeed, of the order Diptera, which includes flies and mosquitoes, and belongs to the family of tolcheniki, or empidid (lat. Empididae). Most likely, the photo galloping Taconic (lat. Empis stercorea). He, like CTiR, I was telling you about earlier, catches its prey on the fly and sucks out its insides, and sometimes the prey can be larger than the hunter. Although in appearance and not say: subtle and elegant, similar to a mosquito body yellowish, small head with short antennae, long wings and back with dark stripes. Is that proboscis looks very predatory…

Tolcheniki (lat. Empididae) is a family of two — winged insects (Diptera) from the short-suborder (Brachycera). These usually very small flies are often painted in an inconspicuous brown or gray tones. The head has a round shape, with males often found increased eye. The proboscis in some species extremely long and serves as mosquito for piercing and sucking the prey. The legs of these insects is relatively long.

They are often called gnats. And not just mosquitoes, but also mosquitoes-tolcheniki. It is judged, what will be the weather. “Gnats are dancing rejoice good weather,” said before, and still often say, watching the “dance of the gnats”. Indeed, before bad weather, when the air is humid, these insects do not “dance”: the thin wings rapidly swell and not allow you to fly… that flies. Yes, it flies, because gnats-tolcheniki — flies. And flies is not easy, but predatory. Their long and sharp proboscis, a great stiletto and lined with spines the front legs — a great “clip”, which tolcheniki hold their prey. Dance flies, these do famously, executing in the air elaborate “pranks”. Yes, often with a load of males carry a “bag” or “bags” with dead flies or gnats. But on the rainy day they stocked up on food. This is a tribute to the ladies. Female dancers are very aggressive and voracious. Here the males and carry around just in case offerings — you never know what might take a notion in the head of the capricious lady. After all, hungry, she will not hesitate to devour her partner. But it is their own business. It is important for us: “the mosquitoes dance” — it won’t rain! 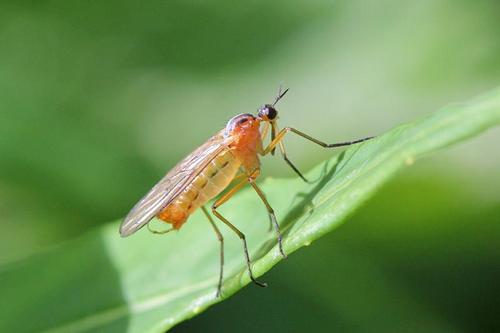 Tolcheniki feed primarily on other insects which they usually catch on the fly, and whose entrails they suck. It often attacks on much larger insects than themselves tolcheniki, meets and cannibalism. At the same time, representatives of the subfamily Empidinae in the course of evolution shifted to floral nectar and taking animal food only at the larval stage and during mating. Significantly increased mouthparts of the genera Empis and Rhamphomyia has evolved into a sucking proboscis. Larvae of Tolkunov also are predators and eat various insects. To their tracheal respiratory system is open only in front and back. They live in the water or, more commonly, in wet soil. There happens the transformation of the chrysalis.

Predators are adult flies of the family and their larvae that live in the soil. The nectar of flowers, which are frequented by adult flies, is for them an additional source of supply. Long needle-like proboscis of Tolkunov equally well adapted for sucking insects and for the absorption of vegetable juices. Prey on small Diptera — captured by the front legs, and hips are decorated with studs, and Shin to follow him tightly, forming a strong forceps. Disproportionate small round head and slightly pubescent body complement the character of members of this family. But especially a kind of “dancing” Tolkunov during the mating flight. They are not only quite complex in its execution, but remarkable in that males carry at this time, the silky “parachutes” or elliptical “cylinders” with foam walls, inside of which is a dead prey, a small fly or a mosquito. Before mating, the male offers the female the production and even saves his own life, because aggressive females often eat males after copulation. These “dances” are observed in representatives of the most common birth — empis (Empis), hilara (Hilara). 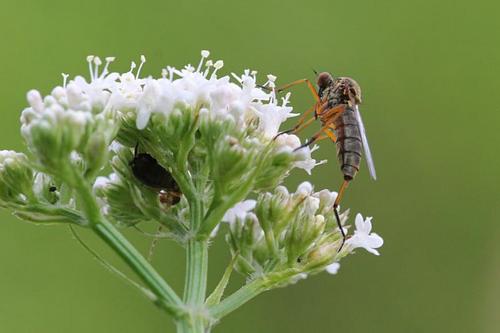 And finally, a quote from the book Gerald Durrell “the Aye-Aye and I”:

Some of the flies-Tolkunov interesting to observe the enchanting mating ritual when they take care of an attractive female. Future fan catches another insect and that puts a kind of silk veil, which produces from his own body. He then takes this gift and dancing with him before the lady of the heart; the latter, charmed with his generosity and attention, immediately reciprocates. While she eats a wedding gift, the gentleman makes an offer. However, in other cases the holders are prudent and hard-hearted: they discovered that a female can win much easier. You are no exhausting pursuits for a wedding gift — it just removes the veil and dances with it. The lady, fascinated by the beauty of veils, preparing for the wedding. Then the knight casts a veil appears before the Queen in their natural colors, and the lady is given to his passion. In General, life and other types of flies as complex and incredible as any soap Opera on television.