In this article we will consider who truncatula what features they have, where it is found and more about this wonderful mollusk. What kind of snails there are and how they look.

Any of the pond snails, whether ordinary, small and large is a snail that lives in ponds and gardens where there is sufficient moisture.

Large truncatula belongs to the class of Gastropoda, which is the most numerous and diverse in comparison with other classes of gastropods. These molluscs in nature more than 90 thousand species, and their habitats not only ponds, the sea, the land.

Great pond snail is a length of about 5 cm and many distinctive features from the brothers.

Let’s talk about the external structure of the large pond snail.It consists of three parts, which are visible and well distinguishable between each other. The torso outside shell to protect the inner mucosa covered by a mantle, a shell of the mollusk twisted in helix 5 turns. The structure of the shell provides reliable protection for the calf from irritants, mechanical damage. The shell is composed of lime for the base structure of the spirals, and top it covers organic substance logopatologii type (that is, on the horns of cattle, etc.). 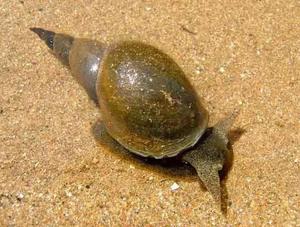 Because of the structure of the shell he received asymmetrical body for a better fit in the “protection” of the connection shell with the body at the expense of muscle. Muscle provides the retraction of the animal inside the shell, and with pronounced feet shellfish can crawl back.

In the internal structure of snails of any kind everything is simple.

The main bodies are:

The snail eats plant foods in powdered form, then the food, the language (has a “float) passes down the throat, is processed by the secret splitting and processed in the stomach, the intestine.

The circulatory system is open, and the move shellfish due to the strong legs that slides on any surface thanks to the secret, secreted by glands.

These unique animals, and killing them is not necessary. They do not harm neither the personnor the gardens, because they eat plant food that is easily processed ( that is, weeds type – ephemers (couch grass, chickweed). Also snails have healing properties, they with a proper diet and the use of secrete mucus, which nourishes human skin and produces the regeneration of skin cells.

Who are the pond snails in General, you know from the previous paragraphs, now we will focus on the small. 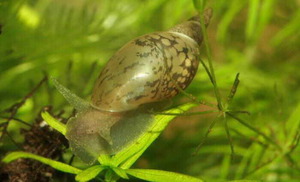 In nature, there are a few small pond snails:

Small snails are found in all gardens, are of small size and beautiful appearance. Be kind to snails, they do not bring any harm, more good.

Found a common pond snail in the middle lane – Russia, Europe. Pond snail has a large size, one shell is 7 cm, not including the body. Breathing truncatula nothing like miniature lungs, the circulatory system is open-loop, feed on tough plant food, detritus and insects. The external structure is not different from the large pond snail, except that the body does not always correspond to the size of the shell, sometimes less than the sink. Shell color – mother of pearl, brown. Body color brown, gray, white.

Shell spirally twisted, has a sharp tip. At the head of the snail has no horns, but there are like ears that are lowered or raised, depending on whether the snail is scared or calm. Snails are not harmful to humans, cultivated plants, but happy to save the garden from pests.

The snails can easily survive this like in nature and in the artificial environment of a terrarium, aquarium. Moves due to the snail mucus secretion and outer soles, which makes her fast enough to move at different distances. Snail slime is rarely used in cosmetics, but most of the clam kept for decoration.

Shellfish are tied to people – breeders, so if you liked a snail, you do not give it to others, otherwise a weak heart animal will not stand.

2 Comments on “A little more about snails the snails”