The majority of the males of the world fauna create selfish. Having the attention of the lady, the males quickly lose interest in her and future offspring. But every rule has exceptions.

Confirmation — best fathers among animals. They not only gently care for the young, but sometimes the eggs hatch or are hatching their offspring. 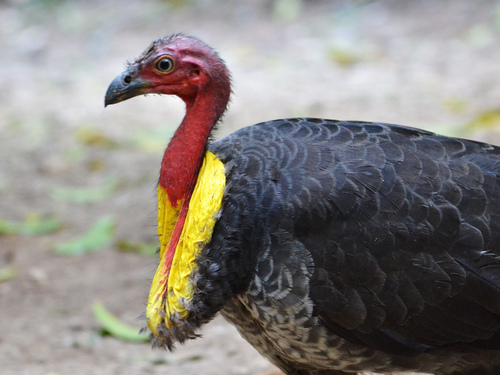 Shrub Bigfoot in the nest

Single mothers is common in the wild. But sometimes this role is assigned to members of the male. An example of this is Bigfoot shrub (weed or chickens). Large (60-75 cm) body these Australian birds are adorned with long limbs, devoid of feathers, red head and bright yellow throat, swelling in males during the mating games. Females of these birds — create frivolous. Eggs, they leave them in the care of males, and continue the carefree bachelor life.

Men-Bigfoot begin to prepare for the birth of offspring long before the appearance of eggs. Future fathers build incubator — pile height of 1 m consisting of leaves and plants. Decomposing, they emit necessary for the development of heat. But the creation of nest duties are not limited to males. They carefully watch, that the temperature in the interior of the masonry did not fall below 33 °C and did not rise above +35 °C. “Thermometer” serves as the sensitive skin inside the beak. 3 days after hatching the Chicks begin to fly and leave the caring father. 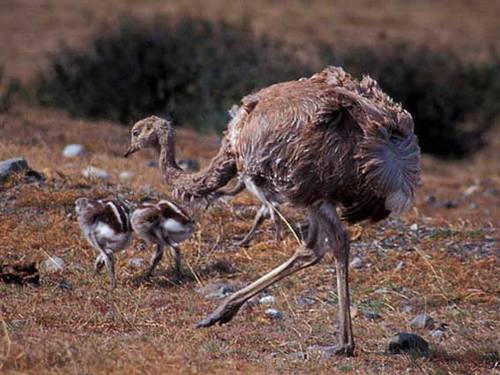 Large flightless birds resembling ostriches, live on the territory of South America. Its name they received because of the specific voice — sounds are reminiscent of the cry of “Nan-du”. Footed birds live in groups of 5-25 individuals. During the mating season the males gather a harem of several females. The head of the family vigilantly to his “wives” did not attempt competitors, which, if necessary, he wards off the blows of a strong beak and powerful legs.

After mating, the future father diligently builds the nest, which is a hole in the ground, lined with plants and moss. Established in a secluded place females lay eggs. The role of the inmates of the harem in reproduction ends. Windy “ladies” go in search of a new “husband”. A concern for future babies borne on men’s shoulders. Single father a single step does not depart from the masonry, attacking all who dared to approach the nest. After the appearance of the kids on light feathered dad leaves their Chicks. Six months he feeds and walks the young and monitoring their safety. 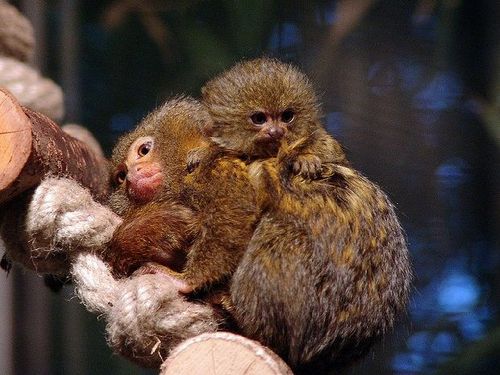 Lovely creatures living in the tropical forests of South America, the smallest representatives of the order primates. Length petite body does not exceed 15 cm, weight is 90-150 g. it is not Surprising that in the wild small creatures are exposed to numerous dangers. To protect yourself from enemies, tamarins chose the dwelling place of the crown of tall trees. Live monkeys-dwarfs in family groups. During the mating period, the female is given the right to choose which of her males.

Unlike counterparts in many family in pygmy marmosets primarily in the issues of upbringing of the younger generation is the father. Touching concern he manifested at the stage of pregnancy of his girlfriend and takes part in the appearance of the calves on the light. The female gives birth from 2 to 3 kids that during the week hiding under her stomach. Then the raising of offspring is engaged by the male. For fifteen months he wears the heirs on the back, trusting their mothers only at feeding time.

An example of equality and fair distribution of responsibilities in the family are the relations of Emperor penguins. These inhabitants of Antarctica, defying the harsh climate and the air temperature, even in summer does not rise above -20 °C, live in colonies numbering 300-10 000 individuals. Two months into the year, birds spend at sea, the rest of the time is devoted to procreation. In late may, the female lays a single 450 gram egg and immediately hides it under the abdominal fold. After a few hours, priceless treasure carefully takes the father, providing the capability to hungry mother to go in search of food.

A male, warming the egg with the warmth of her body, for weeks, retains immobility, eating exclusively snow. Do not freeze the help of numerous members of the male staff — they gather in groups, periodically giving each other the right to bask in the center. After 3 months, returns from his travels female. She unerringly finds the exhausted spouse and hatched Chicks. From this point, the burden of feeding and upbringing of the baby, the parents are divided in half. 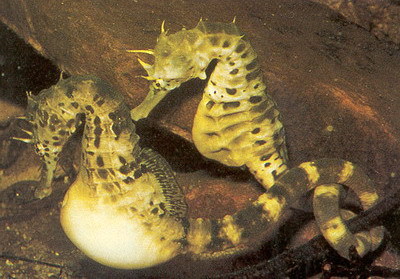 Best fathers among the animals is the seahorse. For these members of the class of ray-finned fish procreation is purely for men. The initiator of the mating season is often a female. Beloved, found each other, inseparable. Clasping tails, they perform continuous “dance of love” or rest, attach to the stems of underwater plants.

Using her ovipositor, she enters the eggs in a special pouch located in the abdomen of her lover. The gestation period is 20-50 days. Upon the expiration of his leaden seahorse clinging to the tail of the algae and starts hard to squeeze a fully formed fry. This process is often accompanied by very tangible travail. Immediately after birth babies are able to eat independently and not need the help of parents.

Nature never ceases to surprise us. One of her amazing phenomena — best fathers among the animals put on their shoulders, it would seem that a purely female duty. Bigfoot shrub, common Rhea, pygmy marmoset, Emperor penguin and sea horse are rare, but not the only daddy in the world fauna, showing a touching concern for offspring. Highly developed paternal instincts show also wolves, jackals, flamingos, Jacana, barking frogs and giant water bugs.