In the underwater world inhabited more than 1200 species of venomous fish, which are found mainly in tropical marine waters. These dangerous vertebrate animals produce strong, a highly toxic substance harmful to humans and other living creatures, and release them through the spikes, fins, fangs for protection or hunting.

Poisonous fish or bright color, warning their enemies about the threat, or subtle coloration that allows them to masquerade as the environment, waiting for approaching of prey. Find out the 5 most poisonous fish in the world from this list, to avoid injury from them and poisoning the body. 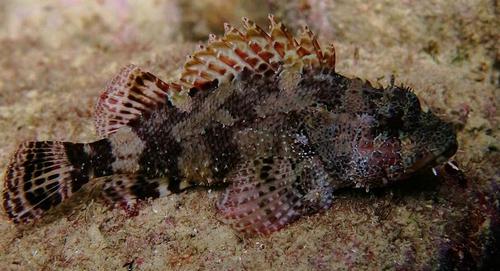 Skorpena (sea DAB) is a poisonous marine fish of the family of Scorpion tailed, which is common in tropical and temperate seas (including the Black, Mediterranean seas), but is most common in the Indo-Pacific region. The Scorpion fish has a sting in the form of spikes that are covered with poisonous slime; in the bones of the dorsal and pelvic fins of the fish contain venom glands. Skorpena reaches on average 30 cm in length and 1 kg in weight.

Marine ruff – bottom fish, feeding on crustaceans, mollusks and smaller fish. They prefer to be in shallow water, where disguised as rocks and coral reefs. Scorpionfish hunt at night. Their stinger to deliver the inflammation, pain, and swelling that often covers the entire leg or arm for a few minutes. 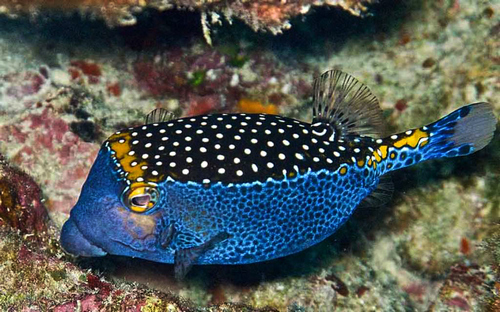 The boxfish cube (fish-box) belongs to the family Kuzovkov and inhabits the reefs of the Indian, Pacific and Atlantic oceans. This fish grows to 45 cm and is easily recognized by the cubic form of the body: the sides are fused bony plates, covered with a thin skin which form the shell. The bright yellow color and black spots on the body of this fish warn predators about the threat.

When you stress or the feeling of threat boxfish cube released from the skin into the water a toxin, poisoning the neighborhood. Fish emit poison astrocytosis, which destroys red blood cells, by disrupting the function of the respiratory system. 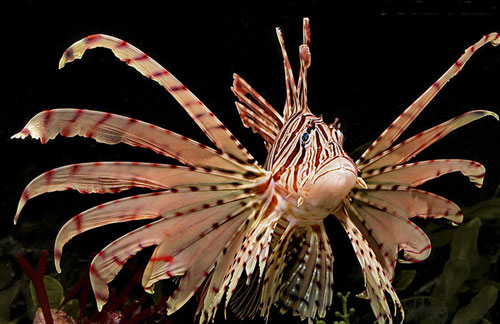 Lionfish-Zebra (lion fish) is a poisonous fish belonging to the family of Scorpion tailed, which lives in the ecosystem of the reefs in the Pacific and Indian oceans. Recently, lionfish-Zebra spread on the Atlantic coast of the United States that, according to the researchers wildlife, is the result of damage to the aquarium caused by hurricane Andrew in 1992. These fish grow to 40 cm in length and weigh up to 1.2 kg. their life span ranges from 5 to 15 years.

The lionfish has distinctive red, brown and white stripes on the body. It has large pectoral and elongated dorsal fins which it uses to puncture tissue of the victim and the administration of poison. Injections of poisonous spikes cause severe pain, swelling, difficulty breathing. Large doses of poison in extreme cases, lead to cardiac arrest. 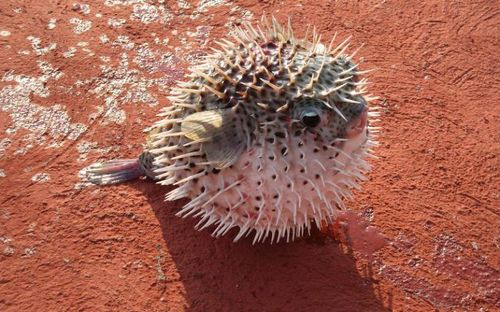 The Blowfish (puffer fish) – a member of the family Skalozubov, which includes more than 90 species of fish, possessing the ability to swell, gaining a large amount of water or air, and produce sharp spikes in danger. Blowfish live in areas of warm and temperate climate, mainly in the seas, but also found in freshwater rivers of America, Asia and Africa.

The largest puffer fish grow up to 90 cm in length, but most members of this species tend to have smaller size (5-65 cm). Their jaws consist of 4 fused teeth forming a beak-shaped form. These fish feed on algae and invertebrates.

The Blowfish has a strong toxin tetrodotoxin concentrated in the skin and internal organs (bowels, liver, eggs, gonads) and is 1,200 times stronger than cyanide. The tetrodotoxin – neurotoxic venom that attacks the brain, causing weakness, paralysis, and even death at low concentrations (2 mg).

Despite the toxicity and danger of the puffer fish, its meat is a delicacy in Japan, Korea and China. In Japan, the dish made from this fish is called “fugu.” It is prepared only by licensed chefs who thoroughly clean fish from toxins.

The most venomous fish in the world 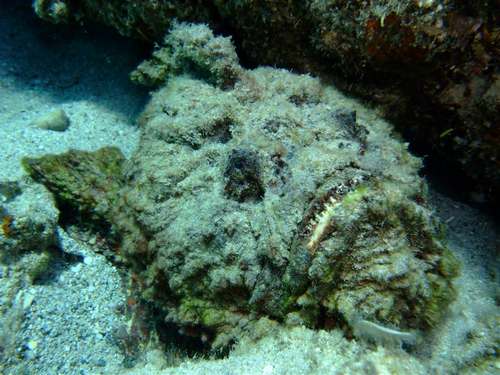 Fish-stone (borodavchenko) belonging to the family of Scorpion tailed, – the most venomous fish in the world. It is a demersal fish that lives in shallow waters of tropical Indo-Pacific region. It has a warty surface, grey color and looks like stone (hence the name), mingling with the natural environment and camouflaged on the seabed, and scorpionfish.

Borodavchenko has 13 needle-like dorsal fins through which delivers the poison to the victim. The number of produced poison is dependent on the pressure applied to the fish. Average fish length – 30-40 cm, weight – 2 kg. Borodavchenko still dwells on sandy or stony bottom, waiting for approaching prey (fish, crustaceans).

Because of its appearance, the fish-stone is not visible on the seabed, so there is a risk of accidentally stepping on it and getting hurt. The flow of poison in the human body leads to rapid swelling, temporary paralysis, muscle weakness, tissue damage. Injuries from spines of these fish are extremely painful and sometimes fatal.

The list of the most venomous fish include skorpena, boxfish cube, lionfish-Zebra, puffer fish, and the fish-stone, which is the most poisonous fish in the world. These fish occur in coastal waters of the Black, red, Mediterranean and other seas. It is therefore imperative to observe the rules of swimming, so as not to harm the health. For example, in the Red sea you can not swim in the evening and night, because of poisonous predators at this time, go hunting.

13 Comments on “The most poisonous fish”