Insects have several ways of development after hatching from the egg. Some of them have a larval stage differs from the adult insect (how different, for example, the caterpillar and the butterfly), and the differences between adult fish and the young (nymph) not so dramatically, and often consist only in the absence or smaller size of the wings. This type of development is called metamorphosis with incomplete metamorphosis. In the photo it is a young insect. This is a nymph of a bug, most likely from the family of slepakov (lat. Miridae), for example, something like alfalfa bug. Young individual with a bright green color, with dark hairs on the body, rudiments of the wings, particularly long hind pair of legs (probably intended for jumping) and a long mustache. Under the head, on the chest, hidden proboscis, which is the main body of food for bed bugs. Most of them are using it drinks the juices of plants, but there are predators, they can suck other insects, there are also fans of blood… 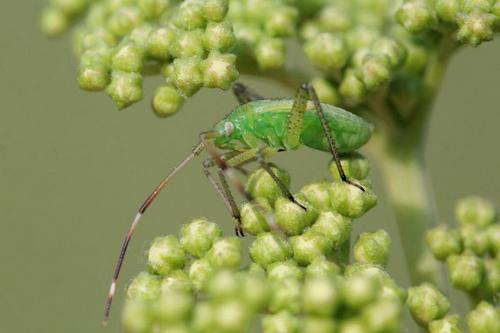 Family Kanaki (Miridae) Herbal bedbugs or kaneki. In most plant-eating bugs that do not have simple eyes (“kanaki”). Antennae much longer than head, second segment longest, terminal segments usually more subtle. There are klavus, corium, cuneus, pereponochka. Metathorax with scent gland openings, mesothorax and metathorax complex are both composed of several parts. 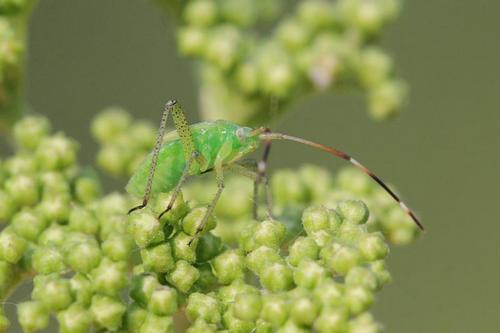 Bugs medium or small sizes; reach a length of from 2 to 11 mm Body with a relatively soft covering, is almost circular or nearly oblong in form, often moderately long. Live on plants, the majority of herbivorous, some soovitage (eat plant and animal food) or predators. Most herbivorous species and soovitatav feed on angiosperm plants (herbaceous, shrub and tree), however, there are those who are fed on gymnospermous plants, ferns and woody mushrooms. 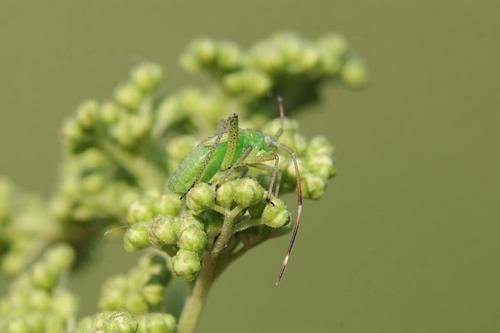 Lucerne bug (Adelphocoris lineolatus). The body length is 7.5-9 cm. Adults and larvae live on herbaceous plants, often on legumes. Eat juice on the stem, kidneys, ovaries, than cause the shrinkage of the plants. Overwinter in the egg stage in dry bean debris. Larvae appear in April-may. Approximately a month later appear adult bugs that lay eggs in young stems of legumes. Adult females of the second generation appearing in July and August, lay eggs in the stems closer to the root. 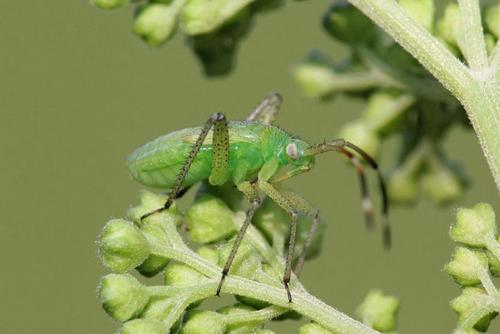