Many cat lovers admire Abyssinian cats. Still – the representatives of this breed are very cute and have an attractive appearance, they are tiny and will not leave anyone indifferent. But despite its diminutive size, the Abyssinian is very similar to wild animals that belong to the family of large cats. 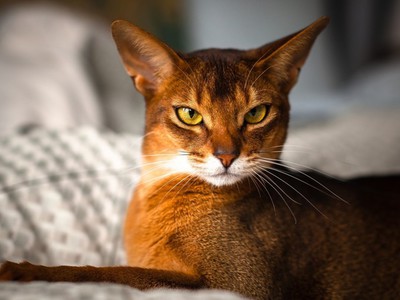 Today we will tell you what is special about the Abyssinian cat, where did such an unusual breed and how to care for them. 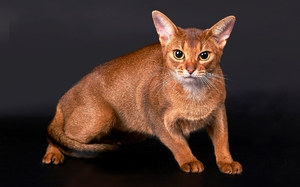 Abyssinian cat is a very ancient breed. In ancient times, the breed lived on the territory of modern Ethiopia, which was then called Abyssinia, for one thousand years. Quite often archaeologists found on the walls of ancient drawings, where a number of pharaohs depicted these cats.

Abyssinian cats in those days were considered sacred animals, they lived in the families of the pharaohs or their courtiers.

Because they were highly respected, many of the qualities inherent in the breed today, for example: 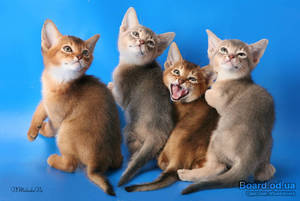 In America the Abyssinian cat appeared at the beginning of the last century. But in Europe the breed after the wars have virtually disappeared, but was recreated later thanks to the efforts of breeders.

Kittens Abyssinians differ significantly from adults. They are attractive, but a bit clumsy and nothing in them gives belonging to Royal breed. When the kitten grows up, he is graceful and stately, then you can see that he’s pedigreed.

Key characteristics of the Abyssinian

Abyssinian cats are medium-sized animals, they are short in stature and can weigh an average of about five pounds. If a person has never seen this breed before, after he once shows his photo or he will see with his own eyes, he is unlikely to confuse it with other cats. 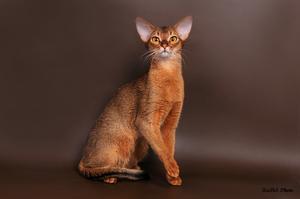 A characteristic feature is the unique color of the animaldepends on its cost, cats of this breed have their own distinctive features that relate to appearance and physiology. Consider just some of them:

On average, cats of the Abyssinian breed live from 15 to 20 years.

The coat colors of Abyssinian cats 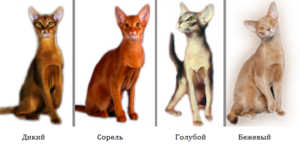 There are only four recognized colors of Abyssinian cats:

Among the representatives of this breed is the most common color is wild. 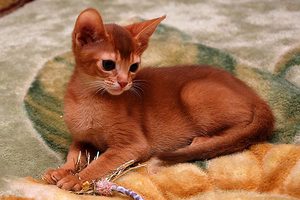 It is characterized by the presence of shades:

And on tip of tail and muzzle may be black marks.

But the sorrel (or red) from the previous is very much different. The cats in this case are a reddish-Auburn shade of hair, but the tail and the face strongly marked brown and chocolate color.

Blue color the body of the animal is grey and warm beige, on the tail and the face of a cat have bright slate-grey markings. 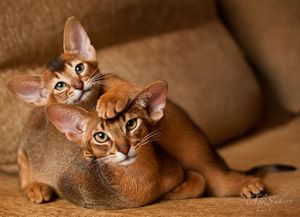 Fawn or beige color – this color is a light brown, and the markings are darker.

If externally, Abyssinians can be called Royal and majestic, by nature they are very different, though, and make it clear to the owner that he respected them.

You can call such distinctive traits of these cats: 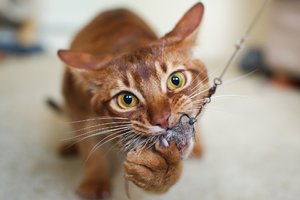 Abyssinian cats are extremely active and nimble, and if you don’t like the temperament of the animal, then look for yourself as a pet cat with a lazier disposition. But Abyssinians are very sociable, well they will get along with small children and with other domestic animals even dogs.

Cats of this breed have a clear, cute, thin and quiet voice. He does not act on you annoyingly.

Setting the stage for a cat of this breed, know that it will bring to your home a lot of tenderness, joy and love. They are not capricious, and fond of company, not like a long time to get bored.

How to care for Abyssinian cat

For Abyssinian cat care is not particularly difficult, because their coat does not require special care, and feeding of animals such as purebred cats of other varieties.

From owners of this breed require not so much:

To breed Pets only with representatives of their breed that the offspring were full-blooded.

Common diseases of the representatives of the Abyssinian breed 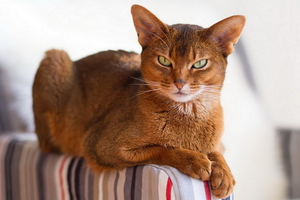 Mostly Abyssinian cats and cats and cats have good health. It is very important to feed them – if you use the finished feed, it has to be an expensive feed and food premium brands.

Like other purebred cats of the Abyssinian breed may be prone to several genetic diseases. But if you buy a kitten from a certified nursery, the problems with it will not arise, as breeders of all the inhabitants carefully checked. Binding in nurseries are only healthy individuals, respectively, kittens are extremely healthy.

However, representatives of this breed are sometimes susceptible to diseases such as:

Price of the kittens and where you can buy them 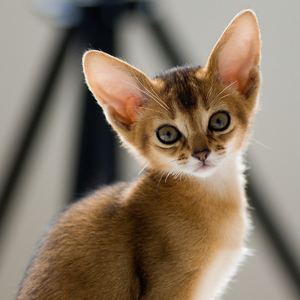 The price of the animal depends on many factors.

So, the price is influenced by the following factors:

On the basis of all these factors determines the final price of the animal and can range from 20 to 80 thousand rubles. But in Ukraine the average cost of kittens is about 10 thousand hryvnia.

Nurseries and breeders of this breed is available in most major cities of both Russia and other CIS countries. 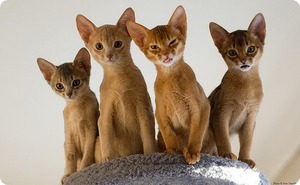 When buying the animal you should rely on the purpose of its acquisition. So, if you plan to breed kittens, you need to take them to the kennels or breeders tested, they must be special documents. And here’s a kitten for your home you can buy in the kennel or the breeders and more cheap.

The most valuable copies is the Abyssinian, a cat registered by CFA (USA), which guarantees the purity of the breed more than 8 generations.

What the owners say about Abyssinian cats

Breeders and owners are very positive about this breed.

That’s what they say in their reviews:

But note the owners and some of the nuances. So, despite the fact that members of the breed typically get along well with other Pets, owners notice that this does not always happen. Others say that cats have a very sensitive stomach and is very picky in terms of food. Sometimes there is an allergic reaction to a particular product.

So, we’ve introduced such breeds of cats as Abyssinians. These Pets are sociable, incredibly loyal and talkative. Usually, like other cats, Abyssinian cats choose a single host and will carry out only his orders. Among other distinctive features of this animal – curiosity of nature and a very developed intelligence.

15 Comments on “Abyssinian cat features of this breed”