Does the owner of a pet to know the anatomy of your pet, because in case of serious problems still have to go to the vet? Of course, a thorough knowledge of structure and physiology is unnecessary, but to be knowledgeable about the basics don’t hurt. It may help to protect pet from injury, to understand that he hurts, and to take timely action.

About the elegance and grace of cats is legendary. And really cat is one of the most mobile creatures, able to balance perfectly the animals and bent in an incredible way. Such aerobics are possible due to the peculiarities of the structure of the skeleton of a cat.

The bones of the skeleton 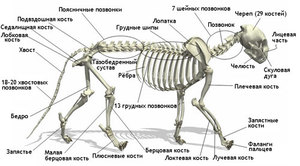 The skeleton of a cat, there are about 230-240 bones. Despite how much the cat vertebrae. Conventionally, the skeleton is divided into the peripheral and static parts: the first is extremity, the second group includes the spine and the skull. The spine is the basis of the skeleton, and in turn, also is divided into sections, depending on the area.

This division is responsible for such a movement. Cervical spine, for example, provides the mobility of the head in cats it is very stretchy, and the rotation angle reaches nearly 180 ° . Next is the thoracic spine, in which 12 pairs of ribs forming the rib cage. For the mobility of the rear paws responsible lumbar, thanks to him, the cat knows how to deftly jump. The largest number of vertebrae is the tail, forming a cat tail.

Cats have a fairly complex system the structure of the limbs. Many have heard about how the cat survived after falling from a great height. During the flight, this animal can lightning to roll over and land on their feet.

Skull . The ratio of the size of the head and trunk of the cat shows that among domestic animals cats have the smallest skull. In the skull bones 11 and the front – 13.

They are flat and durable. So, the cat skull protects the brain from damage.

Muscles. In the muscular system of the cat by more than 500 muscles, which provide the animal such delightful grace of movement. The elasticity of the muscles and their complex structure allows the cat to run fast, jump high and long. Muscles consist of two parts, which perform reference and a work function at one time. Each muscle also has nerve endings and blood vessels. In addition to direct responsibility – ensuring the movement of muscles maintain correct position of the skeleton.

Depending on their functions, we divide them the following systems:

Get acquainted with the structure of organs of cat in more detail.

Since cats are predators, they have a length of bowel is only 2.1 m which is much less than the herbivores. These include the throat, mouth, esophagus, stomach, small and large intestines, rectum. The system performs complex functions. In addition to mechanical (grinding of food) and chemical digestion enzymes nature provided and endocrine function, that is, the secretion of hormones for digestion.

An important part of the digestive system are the teeth, because they are responsible for primary crushing of food. An adult cat has 14 teeth in the lower jaw and 16 on the top. Already chopped and moistened with saliva, the food enters through the esophagus then into the stomach.

The intestines. The small intestine sucks the enzymes and facilitates the exchange of substances. The thick section includes blind, colon and rectum. Unlike the small intestine, there are almost no cells that secrete enzymes. The main purpose of bringing out a waste.

Cats have rapid breathing and it should not disappoint their owners. A healthy animal produces a minute 17-100 breaths. When you exhale besides carbon dioxide, there is also excess heat and steam (i.e. water).

The most important part of the respiratory system are, of course, the lungs. Inhaled air through the nasal passages, humidified and heated, passes through the alveoli into the blood vessels. The heart is shifted to the left side of the chest, here the cat anatomy is similar to ours. As a result, the right lung of the animal a few more left.

It is interesting to note the structure of the larynx. Thanks to him we can listen to the soothing purr of our pet. Unlike large cats, domestic cats have a fixed throat, so I can’t growl as loud as tigers and lions. Completely ossified hyoid bone allows domestic cats to purr on inhale and exhale. 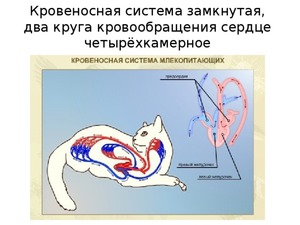 Includes the heart muscle and the network of blood vessels. Heart 4-chamber, located in front of the diaphragm in the region of 3-6 ribs. From the left ventricle the blood is distilled into the aorta and from the right enters the pulmonary trunk. The normal heart rate of an adult animal – 130-140 beats/min. Weight – 16-32 g, which is 0,4-0,8 % of the total weight of the animal.

Since the heart is a small cat she can’t run fast for long distances. Such a structure is developed in a predator’s cunning and adroitness than he uses while hunting.

Provides a normal level of salt and water in the body of a cat. The main feature is the removal of metabolic waste products (urination). The most important role in the system belongs to the kidneys: the liquid goes to the bladder then through the urethra out of the body. Practice has shown that cats have problems with the genitourinary system occur more often than in cats. This is partly due to the fact that females have shorter and wider urinary channel. 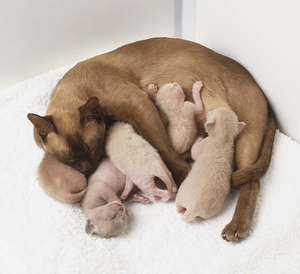 System responsible for procreation, is important for any animal. But its main task, it produces hormones that are needed for the development of the organism. The sexual organs of males and females are different, nevertheless, the principle structure they have in common. For example, the production of sex cells is possible thanks to the paired sex glands: ovaries in cats and the testes in cats. Produced in glands cells are sex ducts: alcaravan females, VAS deferens in males.

Help the animal to perceive and understand the world around us.

Here are five types of feelings:

In each organ is the receptor, analyzer, and Explorer. The information you get receptors through conduits (nerve endings) goes to the brain-analyser.

Vision in cats specific, why about it and there was a lot of false hypotheses. Cats cannot see in pitch darkness, just if there is the slightest light source, it can distinguish objects. The special structure of the eye will allow the animal to navigate is wonderful. A layer of cells behind the retina – the mirror reflects and enhances the not absorbed light rays, which ensures sufficient visibility in the twilight. In the end, the place has a notorious effect of the “glowing eyes”.

The shape of the cat’s eyes can be almond, round and slanted. They are close, in the same direction, which creates the stereoscopic vision.

In daylight the pupil is a slit-shaped or oval, in low light expanded, almost round. If the day the animal’s pupils are dilated, he might greatly excited, under the influence of medicines or sick. A cat can distinguish between six colors, but not so clearly as we do. 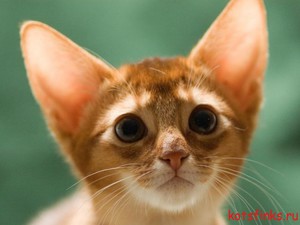 Auditory organ of cat outer ears. They are very mobile, and composed of cartilage. The animal hearing is much more acute than humans. This is due to the structure of the ear and the presence of 52 thousand nerve endings, whereas in humans there are about 31 thousand Audible frequency range perceivable cats – 80 kHz, which is four times more than we do. Cats can catch ultrasonic vibrations.

Detection of taste. Is due to irritation of receptors of the mouth and tongue. The cat recognizes well any flavor except sweet. In General, cats are fussy about food and are excellent tasters. The fact that the sharpness of the taste sensations of envy of them from the tubes Jacobson, who is also the olfactory organ. With their help the animal avoid poisoning, as warned about the low quality of food. 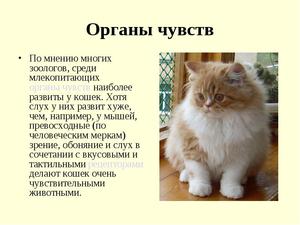 Responsible for the sense of smell organ in the nose that have a special receptor cells. A cats sense of smell is much stronger than human, but not as much as the dog. The number of olfactory receptors – 60-80 million, because of the “cat’s world of scents” is not available to us. A special role is played here by sensitive hairs – vibrissae. Thanks to them, the animal may catch a minimum of vibrations in the air.

The organ of touch is the skin component of the musculoskeletal system and mucous membranes. With the help of tactile receptors animal feels touch, pain, temperature of the environment. Meowing cats have a huge number of temperature receptors located throughout the body, and they maintain internal balance.

13 Comments on “Anatomy and the structural features of the skeleton of a cat, role in the work of the bodies”