Leopard cat is so named because of the mottled pattern on the skin, the breed is officially called “Bengali”. These animals are larger than regular domestic cats, and their spots resemble the pattern adorning wild leopard. This makes them very effective and therefore popular. Where did this cat similar to a leopard?

Of course, in the blood of these animals the genes of the wild ancestors dominated much more than the average home. In the wild forests of Indonesia you can meet these cats living there free life. They are called the “Asian leopard cats”. Body graceful predators can reach a length of half a meter, weight ranges from 7 to 12 pounds. In the middle of the last century, local hunters were mercilessly destroyed the spotted cats due to their luxurious pelts.

If it happened that the deceased mother in the den remained kittens, poachers took them for resale to tourists. Animals were offered as exotic Pets and asked for them a lot of money. But the wild kittens did not survive in captivity.

The first kid, who managed to save a life, was the cat, named “Malaysia”. Her accident in 1961, the year acquired the woman professionally engaged in breeding cats, and went to America. This babe was later crossed with the ordinary short-haired cat and a Bengal breed.

Over the next 15 years, its owner, Genie systematically crossed spotted cats and cats with other members of the cat, intending to “leopard” miniature with a sweet temper domestic cat. Her enthusiasm was picked up by other breeders and by the mid 80-ies of Bengal cats began to present at exhibitions.

After a few years the breed was formally described and registered and began to gain popularity in different countries. We Bengalis are still a rarity. But those who see once leopard cat close and chat with her – will not remain indifferent.

The breed standard and colours

That’s what needs to be purebred Bengal cat: 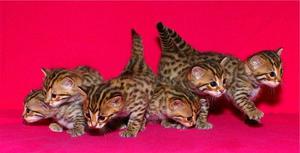 Variations of colors are distinguished by the color of the main background and stains. The light sandy background is called brown tabby. If the background color is silver or gray, these Bengalis are called silver tabby. Further, the unit is spotted, rosetted and marble cats.

Spotted are evenly distributed along the body clearly defined spots. Have rosetted the middle of the spots is lighter than the edging is the most common color in the Bengalis. Marble called because of the characteristic pattern in the form of patterns and stripes, reminiscent of the patterns on the marble.

At a young age in kittens for a while the pattern on the coat becomes dull, this is normal. This is a protective feature, this wild nature that the color did not stand out dramatically, while the animal is still unable to stand up for themselves or to quickly escape. Later (about 3-4 months) the spots again become clearer.

The breed is now so adapted to home maintenance that does not require any specific conditions. The power it needs is the same as other domestic cats. You can give raw or cooked lean meat, chicken, cheese. Fish– not more often 2 times a week. Many people prefer ready to feed premium and special canned food for cats. The animal must always have access to clean drinking water.

Hygiene care boils down to:

Feature cats leopard color can be considered a passion for movement and freedom, they really don’t like a crowded and confined space, willing to play and frolic in the street if given the opportunity. If you can provide your pet dog, it would be great.

The leopard cat does not tolerate loneliness and much missed master of being alone. If you’ve been spending time at work, get in a couple of Bengali any animal, they easily find common language even with a dog.

Some specific breed diseases leopard cats do not suffer, have a strong immune system. Their cat ancestor left them the gift of immunity to feline leukemia, what was the reason for the research scientists.With good care and maintenance of the Bengalis easily live to be 15-20 years, so be prepared that they are in your home for a long time.