Balinese cat — lady posh. Her exterior hides a good heart and great devotion. It is inquisitive and intelligent animal, very affectionate and sociable. Balinese have long hair without undercoat and music in a loud voice.

Happen a Balinese cat from a Siamese with short hair. In the XX century 30-ies of the parents of the thoroughbred began to appear kittens with long hair. Was the first Balinese — Siamese in 1928. These kittens (pure bloods) were born very often, but keep “marriage” the breeders did not want to.

But still a natural mutation to his attention. For example, breeder of America M. Dorsey and A. Smith developed the methodology of selection and breeding, based on which the crossing was to be animals, did not fit the criteria.

Officially Balinese cat was first recognized in 1963. In those years it was called “long haired Siamese”. And already in 70-e years it was renamed the Balinese cat. From Czechoslovakia to Russia, the breed was introduced much later.

What the exterior has a Balinese cat 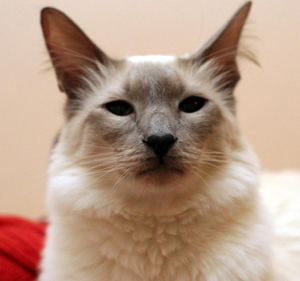 Balinese cats have a striking appearance. For them the characteristic dark tail and paws, as well as, like the Siamese, expressed on the face mask of a dark color. The body weight of an adult male can be in the range of from 2.5 to 5 pounds. Life expectancy Balinese cat is about 15 years.

The distinctive features of Balinese cats:

This breed has a long coat, but no undercoat. And it is quite much easier to care for animals. The coat is silky, adjacent to the body smoothly. Slightly wavy at chin, neck and near the tail.

Kittens Balinese breed are born with short hair. But, the appearance of long hair occurs in adulthood. At first glance, the Balinese are not charms. But you will not be able to part with it, once in love with him. 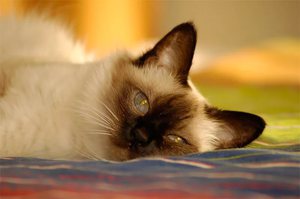 Have Balinese cats are regarded as standard color Kolor point. This color is characterized by the combination of dark and light areas only at certain places (the tail, ears, paws and muzzle). It should be noted that the mask contrast on the face is clearly crossing the border of the ears.

This feature is called the color acromelanism. This characteristic is due to the difference in thermal areas on the skin of the animal. A darker color can be observed in places where the body temperature is lower and to a higher temperature observed light color. With the increase animal contrast color becomes smaller.

The breed Balinese kittens are born white and the points begin to appear just a few months after birth. At the age of 6-10 months is the final coloring.

In the international classification there are 4 main colour of the Balinese:

There are several recognized hints of Balinese cats: 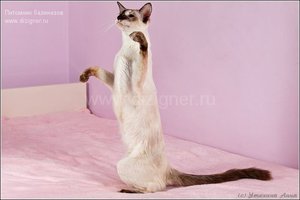 The nature of Balinese cats is its main feature. Bad these animals alone. They are so sociable that very often with family members or with its owner first starts talking. This breed has a pleasant voice. They people love to talk, making a pleasant variety of sounds. This breed loves to help people and to take part in all family Affairs.

Balinese cats are no sofa Pets. It is necessary to provide space for jumping and running. Because of this, keep it in a cramped little apartment is not recommended. For its games it is best to equip the special game complex. They are mobile and very energetic. With young children in the house they easily make friends and find a common language. In all the games they will be the first participants. Other Pets get along well. The aggression they show, but not to fear. With them, they consider themselves equal.

Kittens, Balinese cats have a gentle and kind nature. This create tender, that love in the arms of his owner to enjoy. For these cats it does not matter what you do at this moment (making dinner, watching TV or lying in bed). They will always be around you. Their presence is not Intrusive, but rather for both parties comfortable.

By their nature, Balinese cats are very intelligent. Curiosity can always be read in their eyes. But wanting to explore the world, they are on their way do not destroy and do not disfigure. They do not take revenge on his oppressors. Feeling guilty, the cat will not be offended if will be punished.

Very often, cats of this breed take over from his master the nature. For this reason, it is not necessary to behave aggressively with your pet. If you raise an animal correctly, it will bring you only positive emotions and to fight with them you do not have.

Unacceptable for such cats stalking. Although they are quite sociable, personal space for them is also necessary. Should be careful while chatting cats and a small child. She can give the baby back. It is better to avoid such situations, despite the fact that the back is neat.

The health of the Balinese

Balinese cats breed — healthy individuals. But his parodija they still inherited some of the disease. These animals are more susceptible to the amyloidosis of the kidneys and liver (metabolic protein), dental problems and diseases of the cardiovascular system.

And cats of this breed can suffer from dysplasia of the joints (pelvis, elbows), strabismus, asthma and diabetes.

Symptoms of diabetes in Balinese is:

Feed little Balinese kittens should be 4 times a day, and animals that have reached 6 months of age — 2 times a day. 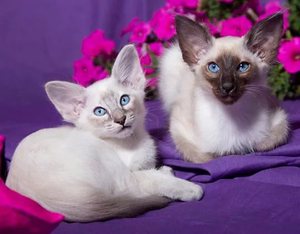 Reviews about this breed of cat. It is connected not only with the docile nature of the animal, but also to the fact that it is very easy to care for. These beauties Balinese breed in need of a standard set of procedures:

Sometimes you can bathe the pet using special shampoo purchased at pet stores.

These cats, the roots of which come from Indonesia and Thailand, carefully monitor their health and extremely clean. Their long, without undercoat wool mats, not confused, thus does not cause unnecessary trouble to the owner.

Balinese prefer to live in a cozy house or apartment. Dwelling on the street is dangerous for them. In the breeding of the most natural instincts have been lost these beauties. And the climatic conditions in our part of the negative effect on the unusual coloration of these Pets. 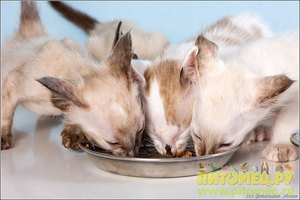 Not picky with the breed in the food. For their feeding suitable natural food and feed special. If you choose for your pet dry food, you should choose only high-quality feed (premium). The power level is low there is no meat and only a small amount of by-products recycled.

Regarding natural feed, be sure to give fresh food. Should be included in the menu, not only proteins, but also minerals, vitamins, fats and carbohydrates. It is preferable to give Balinese cuts of different meat types, vegetables and cereals in such proportions, respectively, 6:1:3.

To mix two types of food is prohibited. You should give preference to any one: whole food or feed dry. Should adhere to and same brand of food.

It is very important to the Balinese always access to fresh clean water.

Advantages and disadvantages of Balinese

In the world there are many breeds of cat. Many of them are fluffy, beautiful, kind and intelligent animals with its own peculiar disposition and opinion. For this reason, it is often difficult to choose one kitten of a particular breed.

If you want to have in the house is a cat of the Balinese breed, you need to know all its pluses and minuses. And you need to be confident that your home will be suited for this breed.

The disadvantages of this feline breed can be attributed to the following qualities:

The advantages include such qualities Balinese cats:

Balinese cats are bright representatives of the cat family with a sweet and amazing character. Although their appearance of Balinese cats are very similar to the Siamese breed, by their nature, they nastically. But on the contrary, grieve alone, very affectionate and gentle animals. To get my own cat this wonderful breed is recommended for people who are unable to be broken fuzzy heart, change his decision.

Why Balinese breed can be found rarely

Pure cat breed to breed are not the same as to multiply. When kennel breeding animals is the reinforcement of certain traits. Win on shows individuals the most appropriate standard.

To improve the type of the Balinese breed, Shorthair breeders bred individuals of the Eastern species. When crossed with a Balinese cat born kittens with longhair gene with improved type (Vara). In order to obtain higher quality offspring, they are crossed with a Balinese cat or together. But there is a problem. It lies in the fact that the Balinese and vary the part of the kittens have long hair and some short. And attract commercial activity to only those kittens who have long hair. And as noted, there is very little in the light.