The cat family is amazing variety of representatives. Some cats people know more, others less, but there are those animals, about which very little is known. One of the latest is a sand cat. 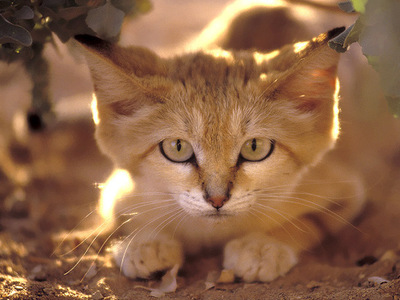 Latin name sand cat – Felis margarita . The name was given to a sandy cat in honor of French General Jean Auguste Marguerite.

After 75 years of sand cats was discovered in the deserts of Karakum and Kyzylkum. Found their Russian researcher Sergey Firing. He described this species. 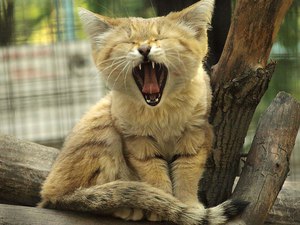 Desert cat is forced to live in very difficult conditions. In fact, these terms gave the name to this breed. These cats live among the dunes and dry shrub in the most unfriendly-to-human parts of the world. In these ground water a rarity.

The area for the resettlement of deserted cats affects separate areas of the Sahara desert, passing through Algeria, Morocco, Niger and Chad, crosses the Arabian Peninsula, passes through Central Asia and Pakistan.

Velvet cats prefer to live in sand dunes, but sometimes these animals are moving closer to the water. Their dens were observed in the coastal cliffs.

Sand cats are born hunters. They manage to find food there, where it is in principle very little. They become the prey of lizards, small birds, insects and snakes. Velvet cats have learned to cope with any desert reptiles. They especially like to prey on horned sand vipers. They quick strokes of the paws on the head stun the enemy, then kill him with one precise bite to the neck.

If the prey is too large, then sand hunters can bury in the sand, so she is not spoiled. In the future, they are for prey will return.

These sandy predators, there is one amazing feature that helps them survive in the wilderness, they are able to do without water for several weeks. The necessary moisture they can get from their food.

In conditions of sand dunes, these animals dig burrows. But they do not mind to use someone else’s housing. Known facts, when they occupied Fox holes.

All day sand cats spend in their burrows. On the surface they only come out at nightfall. Night is the best time for hunting. In addition, at night, these animals lose a minimum of moisture.

A night hunter can survey the area 10 km 2 . During the movement of the sand cat seemed to spread along the surface: the head is lowered, body is near the surface of the dune. It would seem that this position does not allow the cat to move quickly, but a short distance it can travel at a speed of 40 km/h.

Leaving his lair, the sand cat was very cautious. It for 15 minutes freezes at the entrance, prikazivati to the environment. This allows him to avoid enemies.

It is a small animal with small legs. Their body length does not exceed 90 cm. body Length average individual – 65 cm With 40% of the total length being the tail.

Velvet cats have the following settings in the breed:

It should be noted that the color coat of the sand cat is a little different depending on subspecies and habitat. 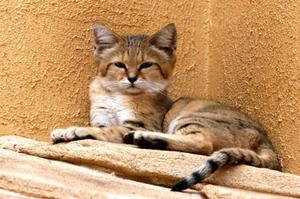 Scientists can’t say what the population of sand cats. The fact that these desert animals are too secretive way of life. Tracking them is very difficult, because sandy predators come out to hunt only at night.

However, we can safely saythat these unique animals. The reason for this is the expansion of people. We are expanding their territory, forcing the sand to escape predators in other lands, less suitable for their existence.

In recent decades, researchers have discovered that sand, the hunters began to move closer to people. But they are not in contact with the person.

Surprisingly, these desert predators, under any circumstances, do not attack poultry. Perhaps for this reason, farmers are tolerant towards them.

Kittens have sand cats appear only 1 time a year. Usually, cats get pregnant in the middle of winter, and give birth in the early spring. Unlike other cat breeds, desert predators pregnancy is not tied to calendar months, and the weather. For once, the light appears no more than 5 kittens.

Kids grow very quickly. On opening the eye takes them a week and a half. 21 days after birth, they are starting to leave the den and begin to hunt on their own. After 7 months, it is the adults who go into the wilderness to live independently.

Puberty sand cats reach a year. However, some individuals can Mature for a couple of months sooner or later. The timing of maturation is largely dependent on the availability of food and weather conditions.

Most of the time these animals prefer to live alone. Together they collected only during the breeding season. The second half of the name is both males and females. However, they do not meow, and make barking sounds. From a distance they look like little barking dogs.

A sand cat as a household pet

As mentioned above, these animals in the winter time, increasingly began to come closer to the human village, but freely in contact with the person not going. So to tame the sandy cat, if only to get her a little kitten from the den. But in this case, to fully domesticate her will not work. She still has all the habits of a night predator. Apartment will be too small.

When raising sand kittens must adhere to the following rules:

At home maintenance the physiology of the sand cats is slightly different. They begin to breed several times a year.

As you can see, trouble with the contents of the velvet cats at home a lot. Therefore it is necessary several times to think before to have a pet.