British cat is one of the most popular breeds in Russia and Europe. She is very popular among breeders and ordinary lovers of Pets for their spectacular appearance and a calm, peaceful and gentle nature. It is believed that the British Shorthair – the descendants of a famous literary character of Lewis Carroll’s Cheshire Cat. Smiling cat, who met Alice in Wonderland, according to legend, were the British. Cats of this breed interesting history and a promising future. They are welcome at all the cat shows and presentations the ultimate dream for lovers of purebred Pets. 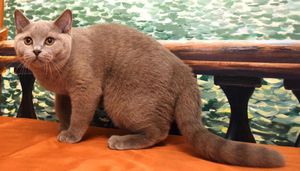 British Shorthair cats breed is characterized by a powerful chin and small, neat ears. From the Shorthair cats of this breed, the eyes are usually yellowish-green, like the majority of other breeds. But sometimes there are British cats with bright blue or emerald eyes. The coat of the British dogs and cats, dense, brilliant. Weight British Shorthair beauty is about four kilograms, males can weigh a little more. The life expectancy of cats and kittens of this breed is ten to fifteen years, depending on conditions of food and lodging.

In the description of the breed says that the color of this British Shorthair cat resembles a mouse. But really, the Brits come in a variety of colors. This Shorthair breed can have very different colors and shades: pure black, dark brown, the color of milk chocolate. British cats are variegated: they can have tortoiseshell or marble colors. It all depends on heredity female. Also purebred British women can be as striped as the Russian cats. Therefore before you take home from the nursery kitten, British cats, you need to carefully examine his pedigree.

If you have the opportunity to look for the mother of the kitten, that chance should not be neglected. High probability that in a few years, lovely baby will be a little copy of Mama. Accordingly, if the mother of the baby – normal yard Murka, from British breed already a little that remains. Conversely, if the British cat gave birth to kittens from a cat of another breed, the purity of the breed will be gone. All that you need to remember when choosing a kitten British.

The nature of the Brits is very interesting. They easily find common language with everyone, including small children. Love to communicate with man. At the same time, the British beauty is always ready to defend their own independence. That is why it is often the idea against the will of the owner. But this is not stubbornness, but simply a desire to show “who’s boss”.

Cats-the British have the following traits:

One of the main problems for the owner, a Brit, is how to send the boisterous energy of the tailed pet in a peaceful direction. For this cats need to constantly to distract from the mischief and pranks. Can distract the cat with toys, loud sounds and loved the food.

From the beginning, once the darling came into the house and began to explore new territory (age does not matter, this applies to cats and cats and kittens), the owner must give pussy to understand that she is on foreign soil and must obey the existing rules. Otherwise, the cat imagines himself a mistress and soon will begin to “mark” their territory.

If this habit be fixed, re British cat will be very difficult.

To the life expectancy of the British cats was long, you must comply with all recommendations of breeders and veterinarians to care for the animals of this breed. The British are fairly undemanding in feed and content, but, nevertheless, the correct mode of the day and a wholesome diet is essential to good health. To obtain detailed information on the care of a British cat on the Internet, in specialized literature, and you can also visit the veterinary doctor.

For British cat lived a long prosperous life, caring for her, consider the following care instructions: 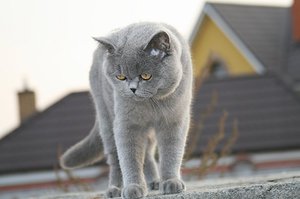 You should not attempt to alter the independent nature of this furry beauty. If the British were up to something, she rarely makes concessions, so sometimes the owner is best to give in. Let it come on its own. Also, we try to break down “obstinacy” of the British. Inept actions in this direction can only cause the animal serious psychological trauma.

For British cat know who’s boss, sometimes it is necessary gently and calmly but firmly put in place. These aristocratic animals do not like rude shouting, swearing, physical punishment. If the owner or a stranger behaves provocatively in relation to this wayward beauty, British, cat, always ready to defend themselves.

In order not to provoke the animal to aggressive behavior, you need to avoid open conflicts with the animal, and avoid contact of the animal with strangers and those whom she for some reason does not like.

British cats are affectionate and love children, but at the same time are independent. Also cats don’t like being squeezed, hugging, taking hands. If the cat clearly wants to be alone, it must be left alone for a while. After some time, she will rest and will certainly want to communicate that it’s important not to rush things.

The British are conservative, you get used to the house and the owner does not like change. Therefore, if you have to temporarily leave the pet in the care of others, you first need to introduce British cat with that person, leave them together for a while, and then observe the reaction of the cats. If the animal shows anxiety and doesn’t make contact, it might be better to look for another person that could temporarily look after the animals.

British cats are very playful and energetic. They definitely needed movement. If the animal is clearly not averse to frolic, in no event it is impossible to limit it to this. The main thing – to remove from sight everything that can break, be broken, get lost. People living in private homes can safely drop the British to walk. Since the cat is a natural wit and a good memory, it will not get lost. The main thing – to the animal that goes out into the streets, were vaccinated against rabies and other feline infections.

The British differ outgoing personality and love to talk to them. To speak with a pet needs a calm, gentle tone. You can’t raise your voice. It is strictly forbidden to shout for the cat or beat her. If she’s in a good mood, make sure to talk with the owner. The British do not like to meow, they are silent disposition. But, if the cat is in a good mood, in response to the welcoming speech of the host, she can meow very loudly.

Personal communication with the British not to show weakness of character.She needs to see a strong owner, the main man. Otherwise, this wayward animal is able to subdue all households, and then come not the easiest life.

British cat – a very interesting breed with a unique appearance and a kind nature. Purchase the little Brit in the nursery, an ad in the newspaper, in the pet store. Importantly, the animal was OK with all necessary documents and a pedigree. If the British cat properly to maintain and educate, it will become a loyal friend of the family for many years.

It is important to know about the features of character of this breed. The socialized British can be the pride of the whole family and the beloved pet.