In any guide or book which describes the breeds of domestic animals, can not meet the characteristic fold of the British. However, we often find ads for sale kittens of this breed. So is there such a breed really, or she just invented as a marketing move? 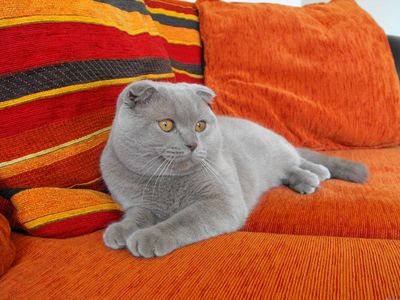 About the Scottish fold has an idea a large number of people. This breed now enjoys great demand among people who love to buy Pets. Cat breed Scottish fold able to make a good impression due to his appearance and unusual character. The main unusual feature of cat is its ears, which have an unusual situation. They bent forward and hanging in the direction of gaze of a cat.

The origin of the breed took root in Eurasia. In the literature, which was published in the XIX century, you can find the first stories and features cats with the bent shape of the ears. For example, one book mentioned that to the UK from China was delivered to the British lop-eared cat, or a cat. Additional information about this story was not found. 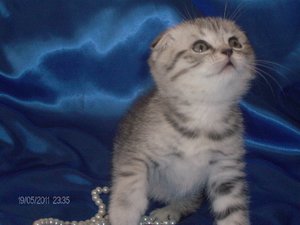 In Scotland Scottish fold cats became popular only in 1959. This year William Ross noticed his neighbor farmer’s pet, having unusual shape of the ears. In 1961, this breed of cat born kittens. Then the farmer decided to share one kitten with William Ross and gave it as a gift. This pet became the main source of future full-fledged breed.

On the territory of Russia Scottish fold cats spread not so long ago – in the 90 years of the last century. Breeders began to think as profitable for them to breed this breed. Then breeders have planned crossbreeding Scottish cats with curled ears, along with the British.

The result of this experience was derived on the territory of Russia breed British lop-eared cats. This individual includes curved lugs are exactly the same as a Scottish breed, and massive torso. But this breed is not yet official. That is why all the generations of kittens who are born with such characteristics, conventionally called a Scottish fold. 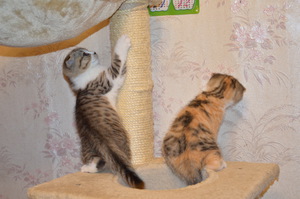 British lop-eared cat breed – handsome, strong, have an impressive structure, but also have a well-developed and flexible body. From the first hours after birth, the kittens already have a large size. In 2-3 years cats fully reach its maturity. While adult males are much more in size than females. The cat at this age has a mass equal to 5-8 kg. The cat is slightly inferior to this level weight.

British lop-eared breeds have beautiful and nice face. Rounded features of the faces give the pet more strength and power. In this case curved lugs complement the image of a cat and make her face slightly surprised and sweet. Eye cat large size and round shape. The most common color of eyes is honey. It is possible to meet the green, Golden, blue and even colored eyes.

Wool breed is quite smooth and fluffy, has a thick undercoat. Most pet owners believe that the breed has only one color.

In fact, Pets have a sufficiently large variety of colors:

Every cat breed has its individual and unique characterand set of behaviors. Some individuals can combine the calm and good manners, the second tenderness and mobility, and others activity and curiosity, and the fourth being slow and calm.

It should again be noted that in the light of this breed was the result of breeding two breeds – British and Scottish individuals with curved ears. Because of this, the nature of your pet may have several features taken from both breeds.

Scottish fold cat may like his character and demeanor on the British Shorthair brother.

Cats are the most affectionate. They’re quickly mastered and used to the person used to live. Capable of loving all members of the family. British lop-eared individuals communicate well with young children. Cats patiently give children to stroke them and play with them.

The British species have one characteristic, which is inherent in the Scottish lop-eared individuals. They may for a long time to stand on its hind legs. They usually stand on them to thoroughly see the object that aroused their curiosity.

In most cases, cats are always friendly and calm, show no aggression towards owners. It is rather difficult to deduce from myself, but if that time comes, the cat immediately released his sharp claws and teeth. British lop-eared individuals will never show aggression first, so have a good time and fellowship with other types of Pets. If it becomes uncomfortable communicating with the inhabitant of the house, they just go to another room or another quieter place.

Also another advantage of this breed is its cleanliness and tidiness. Fold the British carefully monitored for its cleanliness and can’t stand too much dirt on the coat. If the animal is faced with a situation where it will not be able to take care of your appearance, it will become more irritable and not ready to communication.

British lop-eared species, though considered to be quite calm, but never miss an opportunity to hunt for their prey using the trees. Cats have well developed hunting skills. Cat can long time to track down and watch for prey, why their qualities of patience can only envy.

How to deal with the cat and where better to contain? 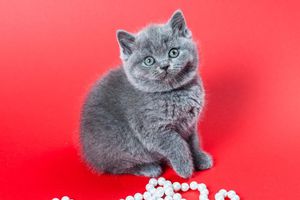 Individuals of this breed love to be in the free and spacious rooms, where no specific source of the noise. The best animals will be in suburban homes. So, the cat can walk in any time of the day, walk through the garden, to play, to run and to make it hunting. But cats also can get along well in a city apartment. Thus it should be quite spacious and large. It is worth considering that the pet is perfectly adapted to the climate and does not require certain conditions. Cats do an excellent job with both high air temperature and frost.

Fold the Briton can be called a predator. But sometimes they are not able to restrain their greed. If a cat can offer several types of treats, it is likely I will keep and eat everything. It is therefore not necessary too much to feed the pet, it will be enough daily norm of food.

British lop-eared cats have a strong and strong-willed character, but can also get serious stress and melancholy. For example, the cat may become uncomfortable after swearing of the owner. On the one hand it might appear that the pet is still on the conflicts that occurred. The animal may sit on the sidelines and wash. But this behavior may indicate that the pet is trying to come around and stop being nervous.

Sometimes it may happen that the pet is too much licking parts of their bodies, which leads to having bald in some places. This may mean that the animal is prone to jealousy (for example, if the owner acquired a new pet and spend a lot of time on it).

If, however, the British lop-eared individual ceases to monitor their appearance and becomes awkward, it can say that it is fun and feels perfectly. Could also be that the cat recently had a lot of vylizyval and now her stomach has a lot of hair. But the owner should not be panic, because it does not threaten the health of the cat. After some time the problem will be solved independently. It may happen that the cat has caught a viral infection. If the General condition and type of cats every day gets worse, the pet should be sent for immediate examination by a veterinarian.

Adults are not particularly active. But it will never give up games with favorite owner. During the game, pet shows different emotions and interest. For example, the cat is hiding from the owner, or runs to another place. This can be understood in different ways: either the animal continues to play, or it’s tired and wants to rest a while.

The cost of the fold of the British 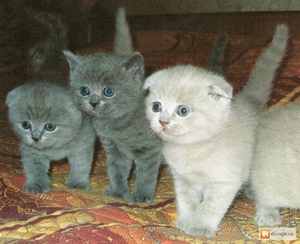 In fact, this breed does not apply to the British breed of cats, so their price parameters are significantly reduced. So, the British lop-eared cat, who especially came to your taste, you will be able to purchase for a nominal fee.

The cost for the kitten, for which there were additional documents can range from 2000 to 5000 rubles. To acquire data of kittens with ease on the street, in alleys or in the market. Sometimes owners even give offspring newborn kittens in good hands for free.

However, if individual British breed would have to have documents and all certificates about passing of immunizations and injections, she will have a much higher cost. The price of this cat can reach up to 14000 rubles.

How to breed British lop?

The breeders who first began to breed Scottish fold cats suffered difficulties from the effects of crossing two breeds with curled ears. Such Pets all the time was not viable kittens.

The litter had violations of the musculoskeletal system:

If your house is home to Scottish fold breed of cat and you want her to produce new offspring, then never try to cross two individuals of the same breed. So, a cat for breeding must have a simple, straight ears. It is not necessary to think that all kittens will fold, because some of them will have the same straight ears.

From the first day after birth of the offspring quite difficult to identify individualsthat will have curved lugs. Such unusual manifestations of the representatives of the British lop breed can occur only at 21 days after birth. Their ears will eventually fall down to the surface of the head.

In the end it is recalled that the lop-eared cat, or the cat are the perfect pet, which has the appearance of a cute owl or a Teddy bear. Cats have cute eyes, nice and sweet personality, calm temperament, grace and special education. A large number of colors and colors will give you the opportunity to choose a breed to suit your capabilities and personal desires.