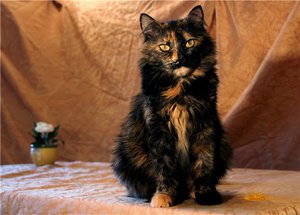 Some cats have the colors of incredible beauty. Among the different combinations of shades stands out tortoiseshell. Beautiful tri-color coat includes intricate patterns and stains. But not all know how to look like tortoiseshell cats. Therefore, in this article you will learn more about the members of this unusual color.

To begin to understand that tortoiseshell cats are not a breed variety, and one of the types of coloring of the coat.

Tortoiseshell includes 3 colors: black, red (red) and light shade (cream, grey or white). Black and red are present in large numbers, which sometimes makes the light blotches are invisible. Colors can be mixed in different variations.

But among the variety of representatives with tortoise-shell color, there are the following subtypes: 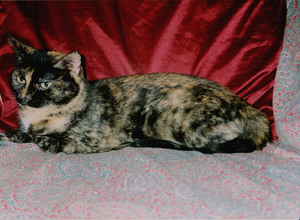 Tortoiseshell cats consists of a chaotic alternation of black and red spots, which resembles fish scales. Usually one color dominates the other. A representative tortoiseshell tortie coloring is unique: in nature can not exist two totally the same cat because of the fuzzy blurring of the boundaries of the spots and randomly placed scales. Flake color is typical of the Persian and Siberian cats.

Color calico is characterized by “patches“, i.e. black and red spots more clearly expressed than tortie, but also are erratic pattern. The calico colouring can have the British and the Scots.

Sometimes found coloring with visible white spots. White patches can be mixed with black and tan or cover the lower part of the body when the top will be classic tortoiseshell.

It should be noted that tortoiseshell colouring is solid and patterned. Patterned colouring can have a spot with additional internal pattern what can be said about solid tortoiseshell coloring. Tone tortoiseshell coloration can also vary: black can be a chocolate or brown in the place of white can take milk or silver, instead of red can be reddish or yellowish shades.

It is known that trichromatic colour peculiar only to cats. Cats with tortoiseshell markings are very rare. 3 thousand tortoiseshell cats have 1 cat with the same coloring. This is due to a genetic mutation which inhibits the ability to reproduce. If on the street you meet a tricolor animal, we can determine that it is a female. To understand how animals acquire such a colour, you should refer to the course genetics.

Sex of animal is determined by chromosomes X and Y. XX is a combination of a cat, XY – the cat. Red (O) black (o) color cat skins set genes located in sex chromosomes. Because the Y chromosome does not contain information about the color, the presence of one of the two colors will depend only on the X chromosome.

But the animal with two X chromosomes the following results are possible when combining different genes: 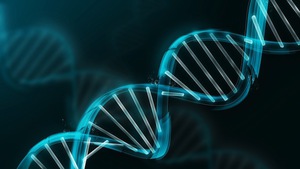 As chromosomes are positioned randomly and are impossible to organize, the possibility of obtaining purposeful tortoise colors. Selection by tortoiseshell cats do not display. While this coloration is formed randomly.

It is necessary to mention that the formation of such a pattern in the fur gives the basis to consider a purebred cat because it is a process of mutation. But this does not preclude the participation of the representatives of this color in various exhibitions and competitions.

The nature of tortoiseshell cats

Tortoiseshell can be found in the following breeds:

Despite the characteristics of a particular breed, almost all tortoiseshell cats are peculiar to such qualitiesas independence and unpredictability, along with mischievous behavior and outgoing nature. This is not surprising. Such beautiful animals always exhibit a good attitude, and they pay back in return. However, Pets with tortoise-shell color can show jealousy with anger towards their owner, but it all speaks of love for its master or mistress.

When they want to eat or play, they are signaling a more active miaow, hiss and purr loud than their relatives. “Turtles” is a very active and agile creatures. Even a large number of ribbons and toy mice they will be small. Among their typical pranks should note the sudden appearance of ambushes or flushing pens and other small items from the table.

The mystical superstitions of tricolor cats

Cats are often defined symbols in the religions and cultures of different peoples. There are representatives of the cat that there may be a good omen one of the people and poor the other. But the tri-colored animals have always been a positive symbol in any part of the world. Because in the past they were considered a rarity, it is always attributed to not only symbolic, but also mystical properties.

In the days of Ancient Russia tricolor cat was nicknamed “bogadi”, however, this was due to not pulling in money luck, and unusual opportunities, which the animal gave God. In that period people were very afraid of fires, which occurred frequently due to flammable wood. Wood built houses and boats, produced utensils and other necessary household items. Different reasons could affect the occurrence of fire. People believed that “bogacki” reduce the risk of this scourge. 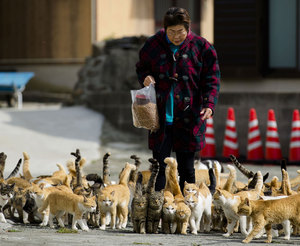 Japan vividly expressed their veneration for these cats. There was even a Japanese cult with a symbol of this colorful animal. In Japan they started to produce figurines with “turtles”, the appearance of which are subject to all things – the posture of the animal, the angle of inclination of the head, of each spot and the chosen colors. If you want a specific tortoiseshell, then you should seek the assistance of an expert on Japanese culture, which assist the Board in the correct programming of the mystical symbol.

In the countries of the UK tricolor roommate plays the role of a talisman against evil spirits and unclean forces. With tortoise-shell Pets at home be more comfortable and calmer as you think of British cat owners. Animals are appreciated for their love of home, which are often not all of the breed.

In the United States tri-colored cat is considered a symbol of wealth and good luck. Americans believe that the presence of such pet in the house will necessarily affect a successful combination of life circumstances and employment with high earnings. They feel lucky to dream of an animal with this coloration.

Even the sailors believe that “bugs” can be saved from bad situations. They believe that the presence on the ship tricolor create will help them to avoid severe storms. But if in the dream one of the sailors will see a tri-color beauty, then rainy conditions, which was the ship, soon will be. These signs encourage captains to buy tri-colored Pets, which are a symbol of good luck.

Amazing creatures with an unusual color, gentle nature and loving heart will definitely be good companion for life.