The Maine Coon is a breed of cat, bred in North America. On the other it is sometimes called the Maine Coon cat. The first representatives of this breed appeared probably about 150 years ago. 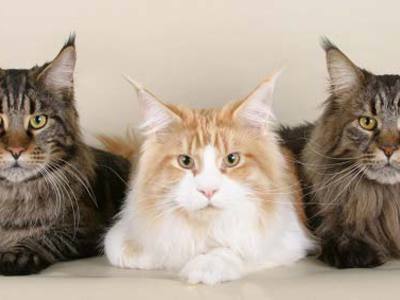 The fact that externally, the Maine Coon is very much like a lynx because of his famous brushes on the ears and large size, often leads to misconception about the origin of the breed is the result of crossing domestic cats with the North American lynx. Actually it’s not so drastic differences between the two types of exclude any possibility of such a crossing.

Maine coons quite easily adapted to the conditions of Russia, although he was introduced for the first time relatively recently – in the early 90-ies of XX century. The features of their character and climatic conditions contribute to the fact that they feel at home here.

Maine coons have a very high level of intelligence. They are observant and smart and amazingly logical in action. Many scientists believe that, like certain breeds of dogs, these cats are able to make conscious actions.

Unlike most cats, males along with females participate in raising the young.

Maine coons have amazing memorythat allows them to easily remember a lot of commands and gestures of the host. Also they are very well aware of the intonations of a person on an intuitive level. 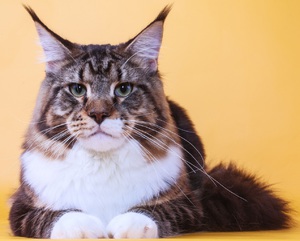 This breed has a very peace-loving nature. Living with a man, the Maine Coon is trying to adapt to it. He studies his habits, the time and extent of its activity and builds its own schedule as the result of the information received. The Maine Coon can never be annoying. With strangers cats behave, as a rule, very wary. To the Maine Coon used to person, time is necessary. Maine coons also do not do very well when they were picked up.

They very rarely conflict with other Pets in the house and get along well with children. Dedication of the Maine Coon is almost similar to a dog, and like dogs, they are trained just amazing. However, in order for the training to bear fruit, requires constant contact with the owner.

Maine coons are a fairly active breed and exercise is very important for their harmonious development. They need to move a lot, so better to make sure that they have to do is space.

As for regular domestic cat, the game as a simulation of hunting, is very important for a Maine Coon. Not least, of course, happen on the street. Walk your pet several times a week.

Maine coons have very thick and beautiful coat, which requires constant care. Cats should be brushed once a week. Use is preferably a comb with rounded teeth, not to accidentally injure the animal. The hair on the body can often descend into mats, which also has to periodically untangle or cut.

Maine coons are easy to water, so to wash them simply. Special attention should be paid to clean the ears of cats. To wipe the ears need a soft, dry cloth, the inner surface of them should be pink.

Despite its size, Maine coons are able to successfully adapt to life in almost any area. They do not run and jump in the corners of the apartment, but prefer to have their personal territory was on a small hill. 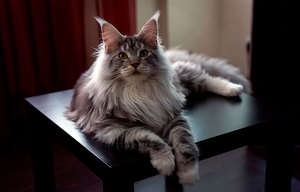 Those who live on top floors, you should be very careful to follow the Windows open in the house. The dimensions of the Maine Coon is simply not allow it to fall in the from a great height, therefore, unfortunately, accidents often result in death for the animal.

The diet of a cat should be meat. Good for chicken, veal, beef, Turkey. Finely slice the food unnecessary chewing of large pieces promotes the development of the jaws of the animal. For variety in the diet you can add cooked fish, shrimp, cheese. In any case it is impossible to feed a Maine Coon pork, lamb, whole milk, and also raw fish.

Colors of the Maine Coon.

If the animal has stripes, then this color is called tabby (tabby). Characterized by fine lines on the face, around the eyes and forming a pattern in the form of the letter “M” on his forehead. Each hair is painted with alternating bands of light and dark (agouti).

There are three basic types of pattern: stripe, marble and stain:

If the color is dominated by a single color and lack the characteristic letter “M” on the forehead, then this color is called solid (solid):

If you have black or Golubogo Maine Coon white hair roots, the color is called smoky (smoke). Among the smoky colors there is a black smoke, blue smoke, chinchilla.

Their klassificeret along the length of the painted hair:

If the color present a clear white markings, the description of the main color, add a “white” (and white):

How is the color determined by the size and position of the marks: