Wild cat ocelot refers to a predatory mammal of the cat family. Lives in Central and South America. Feels good in the jungle and wooded areas. Takes 3rd place in size after the Jaguar and Puma. 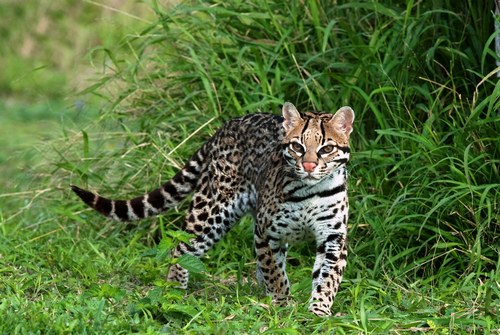 Scientists believe that in ancient times, the leopard, the ocelot was the sacred animal of the Peruvian tribes. He was worshiped and adored. Confirmation of this theory is the fact that the found pieces of Peruvian art of the era depicted this wild cat. In Latin language the name “ocelot” means “like a leopard”. Externally, the animal really looks like leopard. But there are more similarities he had with the cat marki.

Tall wild cat can reach 1.3 m. the animal Weighs from 10 to 16 kg Attracts the attention of exotic color ocelot. Its fur is yellowish brown, with black circular patches. But on the belly, the fur painted in white color. The ears are black with white specks. Each pet has a unique pattern on the fur. It is because of this in the 20th century, the ocelot was nearly destroyed by hunters. 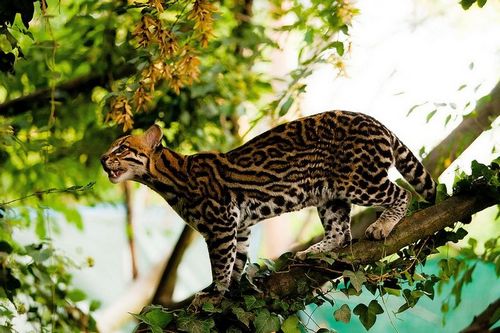 Ocelot feels great in the jungle and wooded areas

Fur coats of the ocelot at the time was valued even more than Fox. Their value reached 40 thousand dollars, and ocelot kittens on the black market sold for $ 800. All this led to the fact that the animal was listed in the Red book.

Fortunately, the population failed to recover, and today the beast has a status of “least under threat”. And yet, deforestation can lead to the threat of extinction of this species.

Ocelot easily domashniaya. The most important condition — the kitten must be purchased in home cattery. It also needs to be documents. Not for money, still young, when they still did not open eyes, to cultivate love and care, then they’re not evil. The beast must constantly be fed, kept in outdoor aviary, care for them. The most famous of pet ocelots have acquired a pet of Salvador Dali Babou. He even traveled with him on an ocean liner.

Behaviour in the wild

Predator leads nocturnal. During the day he sleeps in shelters, and at night hunts. Cat easily adapts to any environment — it can live in the jungle, swampy places at the foot of the cliffs and tropical forests. The beast can be active 12 hours a day. While it is almost impossible to discern: he’s hiding in the Bush.

A wild cat eats small animals: rabbits, bakers, birds and even crustaceans. Her teeth are not adapted for chewing, so their prey the cat was torn to pieces and swallows the whole piece. Per day in search of food, the animal is able to cover a distance of 7 miles. He is a very good swimmer with strong muscles. The ocelot well-developed sight, hearing and touch, which is an added plus when doing night hunting. 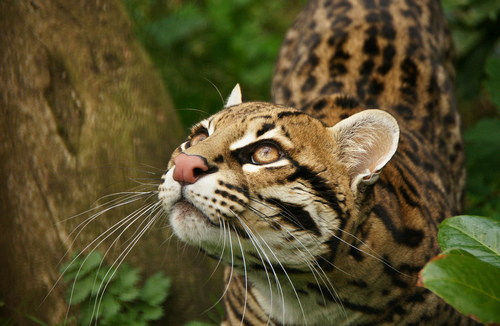 When this wild cat has a solitary lifestyle. Marking his territory, letting her other fauna. The area marked areas can reach 30 km2. Reproduction mostly occurs in the late summer. After mating, the female prepares shelter in caves or razor often so that no one disturbs her during childbirth.

Pregnancy, which lasts about 80 days, she also spends in the shelter. Usually the female gives birth to 1-2 kittens.

Unusual cat on the planet

The ocelot kitten is born blind, but in 3 weeks to see clearly. Kittens feed on their mother’s milk until almost 9 months. Homemade kitten can suck liquid from the bottle. Despite this, 1.5 months they can begin to give solid foods. Older kittens are considered after reaching 1 year, but live with your mom a couple of years. Then they begin an independent existence. The female ocelot give birth 1 or 2 times a year.