Pallas ‘ cat is the cat of the steppe, which are predominantly found in areas of Central Asia, Tibet, Western China, Afghanistan, Mongolia. It is also worth noting that at the present time this species are not well understood, so open questions regarding the manul, scientists observed in a large number.

The paradox of the appearance of this representative of the cat family is that despite its cute appearance, this cat has a rather stern, grim face, but still many this combination sounds fun. It is precisely from this gap grows, the Association with severe behavior of the animal.

In addition to the name “Pallas”, for this wild cat there is another one: “Pallas cat”. So the manul is sometimes called in honor of the German naturalist Peter Pallas, because it was in the eighteenth century were able to open this type of the cat family on the coast of the Caspian sea. 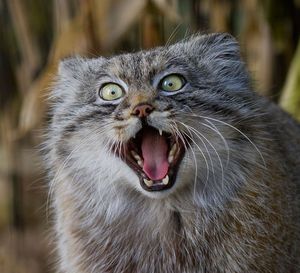 The dimensions of the wild cat manul is not particularly different from their domestic counterparts. Its weight averages less than 5 kg. palissy Usually have thick, short legs. In winter, the Pallas ‘ cat can easily pass for a pretty massive animal because of its beautiful and quite fluffy “coat”. The fur of this handsome not only long and lush but soft.

In addition, it is worth noting that the pupils of a wild cat differ from the pupils of his household relatives, as they are not vertical, and round. The animal’s eyes have a yellow tinge, then they are not only convex, but also large.

Additional “savagery” cat betray long, sharp claws that are curved. Normally in the wild these members of the cat live to be 10 years, but in zoos they can stretch ten years, furthermore, these animals continue to multiply.

How are the salvation and what to eat?

Cat Pallas ‘ cat prefers, like many other predators, great night life, so usually she feed herself in the dark. Typically, housing for this kind of cat prefer to choose in the crevices of rocks, besides these small predators are themselves decent enough to dig burrows.

But it’s worth noting that this wild cat also has its drawbacks, like any other animal. Manul is not the most agile beast, is slow. That’s why he prefers to hunt by attacking your potential lunch from ambush, which usually suits near nor of its future production.

To compensate for a certain awkwardness and clumsiness while hunting this cat cave allows its color, has excellent masking properties. It allows the animal to remain hungry periodically.

Often, these animals feed on various small rodents, preferring, like their domestic relatives, mice and rats. But also they did not disdain to eat ground squirrels, insects and birds. The main competitors in the field of food for these animals are foxes, steppe polecats, birds-predators.

From those animals that can attack it, Pallas ‘ cat usually escapes, hiding in the ravines or holes. He can also climb into trees or climb the rocks. If the animal is to tease, the wild cat is able to make a sound similar to the cry of owls or the barking of a small dog. 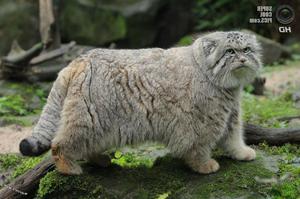 Pallas ‘ cats usually breed once a year. The pairing they have going on in February or March. Based on the fact that the duration of oestrus in females is sufficient small, the possibility of conception is just two incomplete days, and more specifically, to 42 hours.

To future kittens were born in the relaxed and safe environment, their mother hiding at the time in a Fox or tarbagan burrows and in crevices, in rocks. Pregnancy in females lasts for 60 days, so the cubs are born in April or may.

Scientists have a hypothesis about what these members of the cat class, there is a certain stretch of the breeding period. Generally feral cats give birth to two to six kittens, often in their litter is more young.

Generally, a newborn kitten weighs more than three hundred grams. Kittens of the Pallas cat are born blind. Their eyes open at 10-12 days after birth. But it is also worth noting that in 3 — 4 months grown kittens start to live an adult life, independently producing their own livelihood.

These animals prefer to live in the desert mountains, as well as those that have flat tops. They can easily climb to a height of from 3000 to 4800 metres. In the lowlands as well as in the woods, this kind of beast appears infrequently.

Usually, scientists distinguish three kinds of Pallas. Each of them is notable for its particular color, although it is worth noting that differences in coat color is not so great. According to the body size of each variety is also not much different.

The subspecies of Pallas ‘ cat are the following:

This kind of wild cats are quite rare. The number of species all the time continues to decrease, therefore, the man’ula are on the verge of extinction. Considering that the wild cat of the above named varieties is by its nature secretive and widespread enough mosaic, to determine the exact number of these animals is not possible. 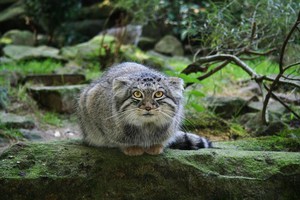 Based on the fact that the Pallas cat is a wild animal, domesticate it extremely difficult. Since the beast is really easy to be called “the cat that walks by itself”, rather, “a cat that climbs on the rocks”, something to get used to captivity, this animal is extremely difficult. Out of love to the secretive lifestyle of the species of cat can be quite hard in the company of other inhabitants of the zoo or in the company of people that might want to look at him.

It is precisely in the zoo this animal can survive with the least damage, but even this habitat, however large it may be, will be for manul nilly. Therefore, it is likely, he will protect his new home, considering all around detractors.

These animals by nature are not aggressive, but in that case, if something seems suspicious, they are ready to pounce on the man. It is therefore not necessary to delude the cute appearance of this animal, as the fangs and claws more than its domestic relatives.

But if you look at the manul on the other hand, in its habitat it is not too dangerous to animals. By itself, the Pallas cat has quite a nice character, besides spends a lot of time alone, hiding in the rocks.