Egyptian cat Mau like transported in a time machine from Ancient Egypt to our days. Its positive qualities are still highly valued and resonate in the hearts of the people. The Egyptian Mau is one of the oldest cat breeds on earth. Its roots go back centuries, in the times of the pharaohs.

The Egyptian Mau is one of the oldest cat breeds on earth. Its roots go back centuries, in the times of the pharaohs. Estimated Mau was domesticated 3-5 thousand years ago. Initially, they, like dogs used while hunting for waterfowl. They showed themselves excellent apportioning, by order of the owner was found and brought in wounded game.

The cat was considered a sacred animal. Such an attitude was a good reason to exterminate mice, destroys the grain reserves. Animals after death were mummified same way as humans, and then buried in special cemeteries. In a sign of mourning, the owners shaved their eyebrows. 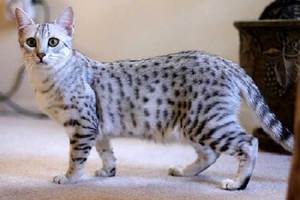 In the Egyptian Pantheon there was a special goddess half woman — polukoshko Bastet. She was the patroness of female beauty, love, fertility. It was believed that the goddess will hear addressed to her prayers, if they will give a cat. For the cult of cats was built special temples, where they tended to the priests. As feed favorite goddess bast were given bread soaked in milk and fish without scales.

In addition, cats were associated with the Supreme God RA. According to the Egyptians, he sent them to earth to fight the snakes. Egyptian cats were hunted and ruthlessly destroyed. In a sign of her patronage of the RA had left on his forehead Mau distinguishing label, reminiscent of the sacred scarab. Another sign linking, cats with the Supreme God was considered to be its ability to constrict the pupils. The Egyptians believed that animals can absorb the sunlight with your eyes and night give it away. This, they explained, the reflection in the cat’s eyes in the dark.

After the conquest of Egyptian lands by the Arabs, cats of worshipped animals moved into the category of outcasts. They really disliked and destroyed under any pretext. By the XX century, the purebred Egyptian Mau is left very little. The situation was saved by a Russian emigre Princess Natalie Trubetskaya. She at first sight fell in love with the graceful tender creation and immediately bought several cats from the Syrian Ambassador.

After long neglect, the Egyptian Mau cat has come to the attention of breeders in the early 50-ies. For the improvement of the breed of cat crossed with the most like them Indian cats. Since 1977, the Egyptian Mau cat is officially recognized in the world. Cats of this breed participate in international exhibitions. In the 90-ies of the revived “Egyptian women” have returned to the Old world.

The tests showed that the modern Egyptian Mau cats are genetically close to European cats. 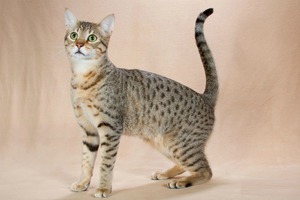 The name “Mau” in ancient Egyptian means “cat”. Felinologists believe that the ancestors of the “Egyptian women” was domesticated jungle cats. Them homemade Mau has inherited a muted camo color with scattered throughout the body of black spots. Breed standards of purebred Egyptian Mau have three options of colors of wool: silver, bronze, smoky. Soft shade palette of spot coal in color with a perfect circle. A real cat the Egyptian Mau is the “necklace” in several rows around the neck. The spots should not touch or merge into a lane.

Egyptian Mau cats are short-haired breeds. To the touch fur is soft and silky.

The characteristic features of the Egyptian breeds also include:

Animals are of medium size. Males weigh 6 kg, females 4.5 kg. the Body has the correct proportional structure. The tail is medium in length with black tip. 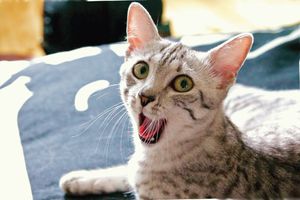 Mau, on the right, I think a cat companion. She feels a strong attachment to people, and pursues the master. Suffering in separation. Egyptian cats thrive in the company of other animals. However hunting instincts make themselves felt. Therefore, it is better to avoid contact Mau with possible prey — rodents, birds.

The amazing feature of the character of Egyptian Mau cats — addiction to water. They definitely need to have access to a water source. For this purpose you can use a big bowl, put in the bathroom. Cats like to jump into the water, play with her. This “Egyptian” different from other cats, which are wary of the water and love to swim.

The behavior of the Mau is accompanied by a different set of sounds. Sudden loud meowing cat is rarely used. They prefer purring, rumbling, sometimes a snort. The Egyptians highly developed vision and hearing.

They are distinguished by playfulness at any age, it is important to ensure the four-legged Pets toys. Like other cats, Mau inquisitive, show interest in everything new. In a room choose the higher ground and from there watch.

The Egyptian Mau does not require special care. However, for the energetic dexterous cat, you need to have a gaming complex, which would allow her to show their temperament. Windows and a balcony to better secure the mesh to avoid accidental falling from height. Cat loves to walk in the fresh air. It can be walked in a special collar on the leash.

Food must be properly chosen. Not to feed the Egyptian Mau cat food from the table. It will suit dry and bagged feed grade “Super.” It is important to avoid overfeeding leading to excess weight. Given the predisposition of the breed to cardiovascular diseases extra strain on the body can cause the development of pathology. Pregnant cats and kittens are fed 4 times a day, adults — 2 times.

Diseases and their treatment 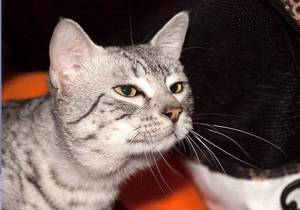 The Egyptian Mau cat is different health. The main problem connected with disease of the cardiovascular system hypertrophic cardiomyopathy. A predisposition to it genetically. The disease is a serious pathology related to the increase in cardiac muscles. The amount of blood flowing to the heart is reduced, which leads to disruption of the overall blood supply to internal organs. Increases the risk of blood clots and heart failure.

In the area of risk, primarily composed of young males under the age of three years. In cats the disease is diagnosed less frequently.

In the case of such signs, you should immediately seek advice and help from the vet. Are crucial first two days after the onset of the acute phase of the disease. If treatment is started promptly and dynamics is developing positively, it is possible to predict a successful exit from the crisis.

The origin of Mau from the region with a hot climate, made her susceptible to temperature fluctuations. Despite the presence of hair, “Egyptian woman” can easily be supercooled and freeze in the autumn – winter period. It is recommended to have in this case a specially selected wardrobe that helps the animal keep the body warm. Some individuals may suffer from asthma.

Animals reach sexual maturity in 3 years. Cats usually tolerate pregnancy without complications and gave birth to six kittens. Interestingly, males Mau take an active part in the care of babies, spend much time with them.

With good care and nutrition the Egyptian Mau cats live up to 15 years.

A favorite of Egyptian pharaohs continues to delight his dedication, friendliness and curiosity of a new generation of people.