Epilepsy in cats is a neurological disease of the cerebral cortex. In cats, unlike other mammals, the disease occurs infrequently. However, many pet owners have faced with strange behavior of the animal, very often do not suspect that you are dealing with the disease. 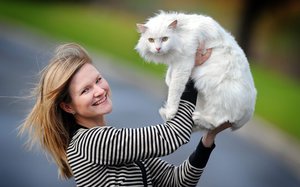 Seizures can testify about any events that have caused a violation of the natural function of the meninges.

Lately, an increasing number of cat owners visit a veterinary clinic with this problem.

Epileptic seizures can be:

If the cause of seizures in the cat combines both forms of the disease, it is likely the animal has a genetic disorder of brain activity in stressful situations it can manifest as cramps. 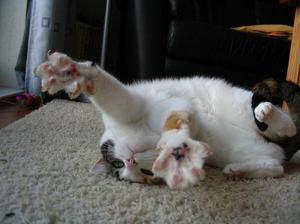 About epilepsy in cats is an acquired disease and can result from a number of factors. For example, low blood sugar level of the animal, which causes starvation of the brain and convulsions. If the disease is promptly identified and received appropriate therapy, about about epilepsy will be forgotten.

Very often the pet becomes a potential epileptic effects of toxic substances in case of poisoning or strong medicines. The time of onset of seizures in each cats different. This is due to the individual characteristics of the organism.

The causes of epilepsy in cats

The source of the epilepsy in the cat may be hiding inside the body of the animal is also epilepsy can be caused by the impact of external factors.

The external causes of epilepsy in cats can be attributed to the influence of poisons, toxic compounds and potent drugs, under the influence of which the brain of an animal responds to exposure to the toxin. As a result of this reaction there is a change in the composition of the blood, production of enzymes by the liver, reduced levels of calcium and sugar. The cat can increase or decrease blood pressure and change the heart rate.

When infected by certain infectious diseases is the Central nervous system, causing the cat starts convulsions.

Epileptic seizures in cats can also occur as the result of the following reasons:

Many cat owners believe that there is a breed predisposition of animals to epilepsy. However, experts no relationship between the breed and disease not provide.

It is now established that cats have epileptic seizures occur more often than in cats. This is manifested during sexual maturation of the animal in the case that the epilepsy is hereditary. The acquired form of epilepsy in cats can manifest in the form of a convulsive seizure after a long time. This greatly complicates proper diagnosis animal.

If a cat was marked by bouts of illness, experts do not recommend using her for breeding due to the fact that there is a certain risk of having an affected offspring.

Recognize an attack of epilepsy in a cat can be for a number of symptoms:

The emergence of a convulsive seizure may be preceded by other signs. An attack of epilepsy in cats develops gradually and is characterized by several stages:

Prodromal stage of epilepsy in cats develops within a few hours. The animal shows anxiety, becomes fearful, refuses to eat and is hammered in a dark place.

Aura occurs in all cats, some become affectionate and looking for attention of the owner, others hide and avoid any contact. At this time, the animal may begin copious salivation, increases feelings of anxiety close to the affect.

Italina stage is the attack. Cat falls. He had convulsions, which may be accompanied by loss of consciousness, greatly increased salivation. Animal makes involuntary chewing movements. At this time you should be near a cat, because during the attack he could go into respiratory arrest.

In the recovery phase the animal is disoriented, his mind clouding, it’s not responding to the usual stimuli.When the attack stops, the state of confusion can last for several hours. Further, the condition of the cat stabiliziruemost.

In very difficult cases, seizures may continue, one after another. In this case, the animal needs immediate help.

For the diagnosis of epilepsy in cats is not enough description of incident the cat attack because this condition can be caused by other diseases. To confirm or refute the presence of the disease, you will need to conduct a series of surveys and laboratory analyses.

Usually, you will need to carry out biochemical analysis of blood, ultrasound examination of abdominal cavity organs, EEG, chest x-ray. Based on the results of the survey is to draw conclusions about the presence and origin of the disease. 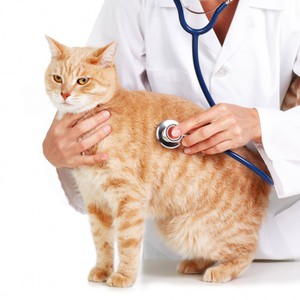 For the treatment of epilepsy the cat will need the help of an experienced professional who will approach the solution of a problem individually, tell the owner how to help the animal and to create comfortable conditions for life. To terminate bouts of the disease will help only competent treatment.

For the treatment of primary epilepsy in cats used anti-epileptic drugs: phenobarbital, zonisamide, pregabalin and gabapentin. The treatment takes a long period of time or becomes a life. These medicines will not cure the cat from the disease completely, but can control the frequency of the attacks. Treatment of epilepsy is considered to be successful if it was able to reduce seizure frequency by half.

If the number of attacks of the animal is not reduced you should consult the veterinarian, since it may be incorrectly diagnosed or dosed medication.

Antiepileptic drugs not prescribed to the cat in the case of a single attack. The therapy begins if the animal happens several times per month or subsequent seizures occur heavier than the previous.

How to help the cat during an epileptic seizure

During an epileptic seizure cat is in need of help of the owner. To alleviate the condition of the animal, you must put it to one side and put a hand under his head.

You should try to squeeze the animal to the floor, to reduce convulsions. Do not exert great physical force to prevent animal damage.

If the cat is mouth pink foam, so he’d bit her tongue or cheek. To avoid this, carefully introduce it into the mouth of the tip of a teaspoon. In this case, the cat does not bite her tongue, and he doesn’t fall into the larynx, causing choking. The attack lasts for several minutes, then the animal will be much easier. After the seizure the cat may behave restlessly, to feel hunger or thirst.

4 Comments on “Epilepsy in cats: symptoms and treatment”