With the advent of the house cat appear urgent questions, the answers to which you need to figure out in advance. What to do when a cat walks? How many times a year is sexual arousal in the cat family? Traditionally, the cat must be in the house to attract positive energy and good luck. But there are times when the pet begins to look for a mate. His instincts take, and the owner need to be patient. 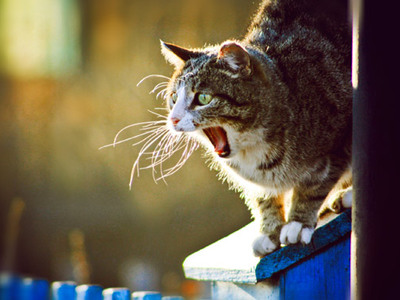 When the cat’s away the first time

Depending on the breed, puberty cats can vary from 5 to 11 months. In most cases, the first time the animal begins to ask for mating at the age of 6 months, but no later than 10-11 months. If the pairing happens, sexual arousal disappears within a day. At this age the female is quite ready for bearing and childbirth. But it is better to refrain pairing pet at an early age because the animal is still not quite fully grown. It is better to postpone mating the next period of excitement. The most active period in cats to mate is the first months of the year: February, March, April. In October and November, the excitement proceeds more quietly and not so noticeable.

How often do you walk cats

Cat cycle lasts approximately 10 days. Any female of different breeds and the individual can walk either once a year or every 2 months. How many times in a year cat walks? A definite answer to this question is no, so you need to listen carefully to your pet.

How many cat walks

Estrus in cats lasts from 1 to 4 days. After mating the eggs are not yet ready for fertilization, it occurs only at 2-4 days of mating. Seed cat can safely be stored inside cats, then to fertilize the egg. After knitting the cat a lot of licks and rolls on her back to egg toward the uterus.

The four stages of the reproductive cycle

The main task for the master not to harm your pet. Choose the right and safe means to alleviate the physiological needs of the animal.