All kittens bite. The reasons for this are different, but the main is that they just want to play. Another question is how and what they bite. If the kitten, or worse, an adult cat begins to bite and scratch and cause the owner serious damage, you should think about what was done wrong and how to correct the situation. For the answer to the question: “How to wean the kitten to bite and scratch” and created this article. 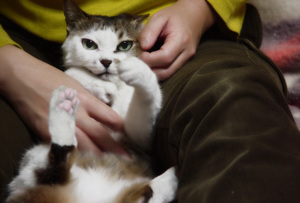 The causes of the aggressive behavior of cats

Each time playing with a little kitten for some reason we do not pay attention to the fact that he almost seriously tries to bite or scratch. However, allowing him to do so, we ask him for further behavior. In the future he will see nothing wrong in this. And we will be thinking how to wean the kitten to bite.

To avoid such consequences, or to wean the kitten from bad behavior, you need to follow a few simple rules:

Thus, it is possible to give the cat to understand that playing with your hands and feet is not the best option available and to wean her from it.

If you get a kitten just weaned from the mother, it is likely that he did not obtain from her a very important lesson: “you can’t always get what you want”. To teach a kitten the cat will gradually begins to translate it from milk to solid food. Thus he understands that all actions he can perform only with her permission.

If solid food is started to give you, it is likely that much spoiled pet. In this case, it is difficult to wean to fight grown cat. Easier from the beginning not to make this mistake. This can be done using two options: leave the kitten with the cat until she’s a little raise it or not to spoil kitten.

If the family lives a kitten, a bad relationship between each other, there is nothing surprising, if he starts to behave aggressively. To change his behavior, reduce aggression in the family in which lives a cat. If the animal always faced with aggression, even if it is not directed in his direction, then intuitively it will behave accordingly. There is nothing to expect from the animal’s calm behavior, if they themselves are constantly in an aggressive state. 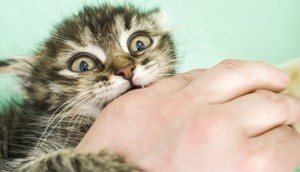 Why do animals attack people? The main reason in most cases is self-defense. In this case, we cannot expect that this will be an attack in the style of the game. To defend himself he could if he was scared by the new environment, new people or noise.

This is very simple — give the kitten to understand that you are his enemy. You need to give him food out of his hands and to rid the surrounding stimuli.

If to caress the kitten “against the grain” or in inappropriate places, it can be very hard to resist it and start biting the “offender”. It may happen that the cat will not be in the mood for in the moment when you choose to cuddle and touch where he doesn’t like it. Always watch the mood of the pet when I’m petting him in a particular place and if he starts to get angry when you pet his belly, perhaps he’s sensitive spot.

Tips on how to wean the kitten to bite and scratch

1. To change the goal for the game

As mentioned above, to a cat you don’t scratch and do not bite, make sure that she attacked someone or something besides you. Buy her any toy that will distract her, for example, a soft toy, a bow on a string or laser pointer. Subsequently wean it from attacking the host and will just have fun with toys.

2. The introduction of a large number of different games

If a cat with nothing to do, it is likely she will begin to scratch and bite while playing with you. If you take it with something more interesting, you can divert her attention and get tired so that the cat will not remain forces to attack you and your limbs.

For some reason, the owners often play with little kittens as if it’s not a game, but a real fight. Animal claws can’t hurt, so think it’s funny. But everything changes when the fangs and claws of a kitten become sharper and begin to cause real damage to the skin. To achieve this, you need to stop playing with the kitten so, if it were a real battle. If the kitten wants to play, do it more gently or using toys.

If the animal is not one to play, the goal — your limbs. This option is 100% solves this problem. Another kitten in the family, will capture most of the attention and is the perfect friend for games. Leaving the house, you don’t have to worry about your pet left alone and can do things because he will do — he will play with your pet.

5. Competently use the rule of carrot and stick 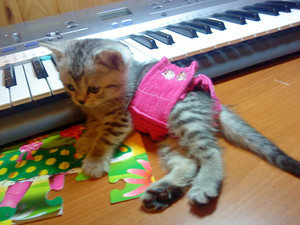 When the pet starts biting and clawing shout at him or, even better, use a spray bottle with water. This is one of the most powerful punishments that can get a cat. After that, the pet before you attack intuitively will understand that immediately followed will be punished. The main condition is that the punishment should follow immediately after the disobedience, to the cat tied him to the attack.

On the other hand, when the cat behaves calmly — make her encouragement. Feed them something delicious, caress her and say what she’s done. Thus will be created a special manner of behavior in which bad behaviour is punished and good is rewarded.

To summarize, we can say that to educate a kitten from the moment he appeared in the house. It is advisable to take the kitten, which is already a little older and he doesn’t have the presence of his mother nearby. And also, it is useful to learn how to behave with a kitten, from the outset not to make problems and not subsequently ask yourself the question: “how to wean a cat to bite and scratch?”.