Choosing a kitten or adult pet on the street to define it, or purebred breed, the inexperienced owner is very difficult. Professional breeders and experts identify several major differences from purebred cats purebred. Focusing on these differences and using the techniques you can try yourself to know the sex of the kitten. So what distinguishing features to navigate and how to learn the breed of cat? 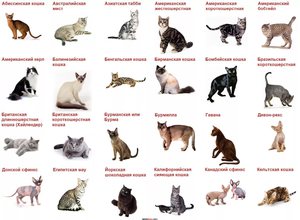 In fact, differences pedigreed aristocrats from cats is quite small and therefore, the definition of the breed at home significantly more difficult. Most inexperienced breeders look only to the external similarities your pet compare his appearance with photographs of the breed of cats found on the network. But any professional will tell you that appearance is not an argument in favor of breed cats as all four-legged furries, anyway, have many external similarities.

Almost every owner of a detecting visual similarity, and finds the confidence that was sheltered in his house a purebred cat. But the examination of the animal it is necessary to estimate also the production of ears, Constitution and character of Pets. The difference is very slight, but still there. So how do you know the breed of cat is an inexperienced breeder? The main features pedigree cats can be found below.

How to determine the breed of cat: classification 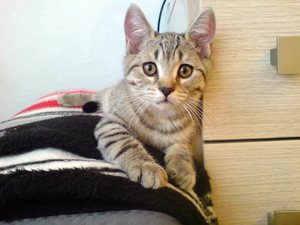 Unlike dogs, a breed which is much easier to determine even on external differences, all cats are very similar among themselves.

The breeders have intensified their activity only at the beginning of the last century and even today, despite clear gradation in the species traits, count of purebred cats is almost impossible.

Anyway, in the world there are about 60 breeds of cats and around 200 varieties of adorable fluffy. According to the classification of cats are divided into the following 5 large groups,which differ from each other in length of hair and some features of a Constitution: 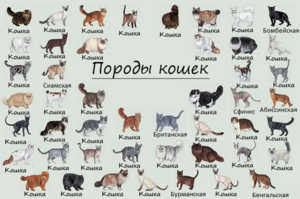 Before you determine the breed of cat at home is patience, because the distinctive features of a softly pronounced. Initially you should pay attention to the phenotype, namely the appearance of a kitten (the length of the hair, its color, the Constitution of the body). For example, Russian blue and kittens have the same coat color, but the Constitution differ. At first the body is more elongated and graceful, and at the second a massive and chunky.

What else to look for when inspecting a furry pet and how to determine the breed of a kitten? All distinctive features should be considered in order. 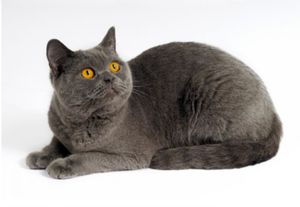 The most obvious and characteristic feature, however, a kind of mutation of the ears are of irregular shape. Ear in different species also differs. For example, Scottish fold cats ears are bent forward, and curl they sent back. Some cats ears are large in size, others, by contrast, is barely noticeable. Differs in different species and the shape of the tail. The OES it is slightly refracted, siamak long, straight shape.

More detail to decipher the breed of cat the ears and tail, you can look in a special Atlas of cats of the breed.

After visual inspection of the pet, you should pay attention to his eyes. For example, a Central feature of all thoroughbred British is their hazel color eyes. Siamese cats got a slight squint, which you notice if you look for a pet home. Most Turkish Angor eyes and does come in different colors.

The structure of the skull and color

The General form of the head will also tell the breed of a pet. Should pay attention to the size of the head, its width and shape and compared with that of purebred kitten. It is also necessary to assess the forehead, cheeks, profile, chin (severity), the teeth and nose of the pet.

Next, you need to look at the color of the cat. Hair color, degree of staining and the possible characteristic pattern are some of the defining factors that indicate the purity of the breed.

But rely on the color of the pet when determining his breed is not necessary, because some individuals have a very similar hair color.

Body type and coat of your pet

The figure also indicates the breed of your pet. Experts distinguish 3 types of exterior in cats:

The quality of wool is another symptom that can help in determining the breed of cat. Pet share on:

Professionals also assess the density of wool, its resilience, and the development of the undercoat.

The character of Pets

The temperament of the cat also plays a role in determining her breed. Of course, each individual species has unique traits, but despite this fact, the similarities are still present in some breed pet. For example, an unusual cat breed ragdoll for most of their time lying on a cozy couch, while wayward Siamese cats are always ready to engage in open confrontation with other individuals.