Each owner cares about the health of your pet. This also applies to cats. Unlike people, animals cannot tell what was bothering him. If the cat is sick, to establish the cause of poor health will be able a qualified doctor. 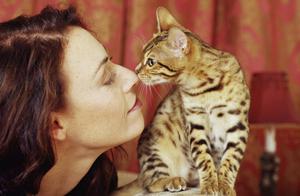 The owner, observing the animal, also can see alarming signals. One of them is the tip of the nose four-legged pet.

Often cat owners ask the vet what the nose should be in healthy cats. Wet the tip of a cat’s nose — a sign of a healthy well-being of a mammal. If the nose suddenly became dry, this may indicate beginning illness. However, it is not always so. The temperature of the nasal tip may be raised in a healthy animal.

The cat’s nose is a pretty complex organ that is crucial for the animal. Cats are not like humans. Animals have a developed sense of smell and the world of smells is very important to cats. She actually lives in this world.

Born, kitty is looking for the smell of mother’s milk, remembers the pit. Growing up, cat’s individual is also dependent on the sense of smell — it helps her in the search for food, hunting and during courtship Dating. Smells allow cats to determine their own and other people’s space and encourage interaction.

The nose of the cat is a unique body and sense of smell is much more sensitive than human. The nose is divided by a partition into two parts, each of which leads into the maze, and then the odors reach the receptor.

Pollution of the body leads to a decreased sense of smell, so four-legged carefully monitor the purification of the nose. Any problems with it significantly reduce the quality of life of the animal.

The breath of the animal is only possible through the nose. The air enters through the nose where it is heated and freed from unwanted substances. The tip of the nose is called the tip, and a mirror, this part is not covered by hair. The lobe is almost always moist. This is provided by mucous secretions and regular licking. Leather mirror has a high sensitivity to temperature, so the pet can understand if the food is not overheated, not even touching her.

The color of the mirror is usually harmonizes with the color of the animal, but there are exceptions. The healthy nasal organs of a cat that has a natural shape of the muzzle. Cats with flat face happen trouble breathing because the cartilage due to the special shape can not cope with their functions.

What determines the temperature of the nose?

Often the ownertouched the nose of a cat and find that it’s dry, starts to worry about the health of your pet. Sick cat? Dry olfactory organ can be in a healthy cat. One only dry this on a few to decide what the animal is sick. The humidity level of the lobe can vary during the day and have very healthy dogs. 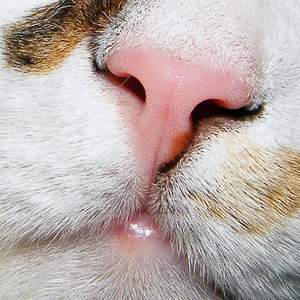 The olfactory organ becomes warm and dry, when:

In addition, dry nose can be the pet in old age, and it is quite normal.

When should I start worrying?

If a cat has a dry top, it can sometimes indicate serious pathologies. For example, cats have a high temperature. However, the normal temperature for representatives of the cat family is two degrees higher than humans.

The temperature of the pet is measured in the anus, normally it is 38-39 degrees. With increasing temperature the cat ears get hot.

The temperature increases when:

Dry olfactory organ may occur if there hit a foreign object. It appears in the case, if the animal is hungry or, conversely, overeaten.

When dry the lobes should be attentive to the animal and to analyze the presence of other symptoms. If the animal became lethargic, there is a poor appetite, the cat meows, you need to go to the vet.

In some cases, a visit to the doctor should be immediate?

In some situations the animal as soon as possible to show the vet.

If the owner noticed that the cat does not behave as usual, we should take her to a specialist.

What diseases hidden behind a dry nose?

Dry cat earlobes may indicate the presence of many pathologies:

In the case of illness of the animal’s nose can change color. For example, the blue hue will tell you that cats with heart problems, or a lack of oxygen in the body.

The red lobe tells about rhinitis or infectious disease.

Nasal discharge occur with colds and all infections.

Diseases of the nose are caused by catarrhal conditions, and various infections. Cats have also been diagnosed sinusitis and tumors.

However, even if cats have wet and cold nose, it does not always speak about one hundred percent health pet.

If the nose becoming dry 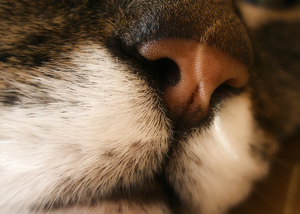 In that case, when the owner found the dryness of mirrors of the animal, do not panic. Perhaps, as is quite normal and does not indicate disease. You need to analyzewhat happened immediately before the occurrence of such symptom.

Maybe the cat just woke up, or actively playing? Or the room gets hot?

It is also worth to observe how the animal behaves. If joined by alarming symptoms, you should schedule a visit to the clinic.

It is useful to measure the temperature of a healthy pet, she is not above 39 degrees.

Do not expectthat proper care will give the cat’s health. Some pathologies require timely treatment to the doctor. And of course, you should not feed a cat a human drug without consulting with your veterinarian.