Jungle cat, swamp lynx, jungle cat, house name Felis chaus , a predatory mammal of the cat family. The animal is rare and listed in the Red book. The remaining members live in China, India, Africa, Central Asia and the Caucasus. There are nine subspecies of this cat in the wild. 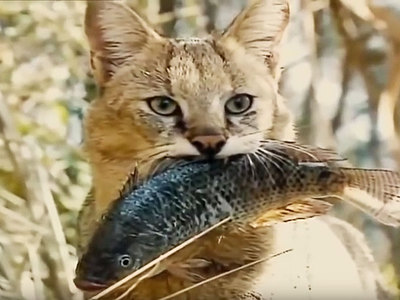 The first animal decided to tame the ancient Egyptians, calling it “Nile”. These predators hunters used to hunt ducks 3 000 years ago. A picture of a cat carrying the game master, can be seen on the Egyptian scrolls. It is believed that animals lived in the houses of the Egyptians.

Previously Felis chaus were to be found in 25 countries. However, the reputation of a wild unpredictable predator people preferred not to mess with him. For rural residents, the neighborhood swamp cat was a real problem: he did not disdain to steal livestock, especially in the cold season, when the amount of food decreased and had to relocate closer to human habitation.

For lovers of exotic Chausie bred breed – a mixture of home and reed cats. The breed is relatively new, was in 1995. The animal has the appearance of swamp lynx, but the nature of a pet: it is more gentle and not so aggressive. The Bouvier communication with the owner, but the hands are reluctant. They are excellent hunters and are active even in old age.

The appearance of a jungle cat

Swamp lynx has a characteristic exterior, by which it is difficult to confuse with a domestic cat:

Adult jungle cat may have a body length up to 100 cm and can reach a weight up to 12 kg . Usually males are larger than females. Depending on the habitat the color of the animal is grey-yellow to reddish-brown. The color of the cat may seem plain, but on closer examination become noticeable running along the back of the strip. Thanks to the distinctive ears of a jungle cat resembling a small lynx, but has a full tail. 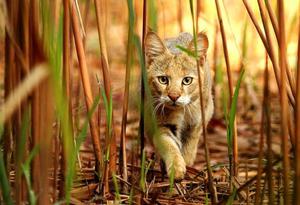 Even tamed jungle cat is a predator, preferring nocturnal. This animal is extremely curious and can act like a kitten even as an adult. Unlike many felines, pet likes to swim, so in their natural habitat rarely stays hungry. As the main diet consists of birds, the animal had to learn how to jump high vertically upwards.

Secretive jungle cat by nature alone, and a couple he’s only in the breeding season. The adult male has a territory of up to 500 meters in diameter. Tamed jungle cat living in the house – a serious threat to all Pets, including dogs. 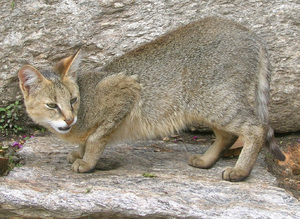 Natural habitat – thickets on the banks of ponds. This carnivore is wary of open areas. House doesn’t like low temperatures so high in the mountains not settling as near the dwellings of man. May dwell in abandoned Fox or badger burrow, but their own digging. In one place, jungle cat does not stay long, regularly varying dislocation.

By day a predator only hunts in the winter, preferring the night. Like any cat, able to sit in ambush, lying in wait the victim. The basis of the diet – birds, rodents, rarely hares and the young of large animals. 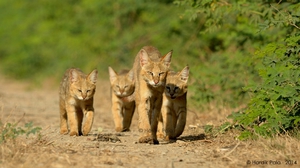 On its territory, the adult male may allow to dwell for several females, but he keeps it to himself. An active search for a pair of starts in late winter, in the breeding season. Frequent violent fights over females between the rivals, including with fatal outcome.

Pregnancy lasts 66 days, after which the light appears from 2 to 5 kittens, which are born blind. In a large litter number of males always bigger than females. At this time the female settles housing, warming it with grass and fur. Kittens live with their mother until puberty, which occurs at the age of six months. The first three months of feed on milk, then accustomed to adult food.

Completely adapted for independent living jungle cat is getting up in age a year and a half. In the wild the average lifespan is up to 14 years. Natural enemies – the wolf, leopard and man.

Deciding to have such an exotic pet, keep in mind that the animal had wild unbridled temper, which is difficult to cope. Keep it at home – a dubious pleasure. As a rule, the animal recognizes only one master, requiring greater attention. The lack of affection and care a cat can hurt and even leave the house. In the mating season the animal is extremely aggressive and dangerous to humans.

Setting the stage for this exotic cat, be ready to devote much time to her education. Keep in mind that adult tame never succeed, so you need to equip a special enclosure with a minimum height of 5 meters and an area of not less than 3 metres . Failure to comply with these conditions, the mobility of the animal will be restricted, which could lead to disease.

To catch a wild kitten, too easy, better look for it in a special nursery. Animal the age of three months are relatively easily tamed, but it requires more attention. Domesticated cat is extremely agile, in need of outdoor games and space is available. The ideal place for its content – a country house or cottage. Pet is easily accustomed to the tray and does not require frequent combing.

Thanks to the good genes of the jungle cat has no hereditary diseases and different health. It’s not suffering from depression and a weak immune system and with proper care never hurts.

House eats once a day. Once a week you can treat your pet raw fish. It is important to regularly arrange fasting days, staging the animal is fasting during the day. This will prevent from obesity, as in the home it moves less than in the wild. Be sure to include in your diet vitamins and mineral mixture and greens.