For many people the word “Sphinx” evokes associations related to the history of Ancient Egypt or mystical, and magical moments. It is the same Association that makes people and such a wonderful breed of cats with the same name. Careful look, live soft the body lines, the harmony and magic have absorbed the breed, sometimes I can even say that these cats came to our land from a totally different planet.

This article tells in detail about the Sphynx breed, give a description of the nature of these cats and features for the care of these extraordinary creatures.

In addition to its devoid of body hair, the peculiarity of this breed is considered to be expressive, resembling the manifestations of magnetism, look, incredible manner to look directly into the eyes of the man. The Sphynx breed is gaining recognition around the world for over forty years. Without further explanation it is noticeable that these cats are quite similar to their other colleagues. However, there are some recognized standards, by which to know the canadian Sphinx.

The body of the Sphynx cat has a soft body lines without angular bends and straight, with a convex, rounded shape. The animal’s body smoothly into a long, smooth and flexible tail, which is in a collapsed state. The life expectancy of this breed is no different from other cats, but there are cases when the representatives of this interesting breed lived to thirty years. 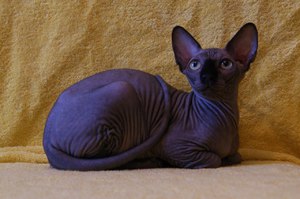 Sphynx have a very hot body, when touching an animal, there is a desire not to release from his hands, to show affection and care. To date, Sphynx are the bald, in comparison with the representatives of St. Petersburg and the Don Sphynx. It is worth noting that St. Petersburg and the Don Sphynx is allowed a small amount of hair on the skin, can not be said about the Sphynx.

It should be noted, asserttest caused by a mutation of the Sphynx is recessive process, this means that in the heterozygous state, the gene responsible for baldness of this breed, phenotypic manifest absolutely not. A sign of the lack of wool manifested only in the homozygous state, when a cat has both a double set of the gene responsible for baldness. The scientific designation of this gene hr.

At present, homozygous pedigree canadian Sphynx must be observed thick skin since the birth of the kitten. On the skin of kittens formed a distinct folds, which cover the entire body of the animal during the first months of life.

The body structure of the canadian Sphynxes 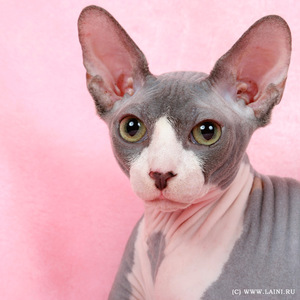 On average, an adult individual ranges from three and a half to six pounds, with males always weigh more than females. Visually, the specimens seem to be very petite, but the sizes are kompensiruet original appearance of the animal. Real, purebred Sphynx is sheer grace and elegance. It is important to emphasize that in addition to all its originality Sphynx have a unique belly shape that resembles a pear.

Paws cats of this breed have an average length, with hind legs slightly longer than the front. It is this figure leads to the gracefulness and elegance of the gait of the animal. Many breeders say that the paws of the Sphinx in appearance due to the specific long, moving fingers like children’s hands.

On the small head is wedge-shaped pronounced located the pads of vibrissal. A smooth curve of the head moves in a muscular, rather short neck. It is worth noting that, despite the presence of pads of vibrissa, mustache this breed is completely absent. Chin Sphynx strong and necessarily forms a perpendicular line with upper lip. The nose of this breed is straight, the ears are wide and large, with smooth rounded ends.

As mentioned earlier, the peculiarity of this breed are eye. They are quite big, almond shape. Most often in nature meet Sphynx with green eyes. Look very careful and touching, looking into the eyes of a man, the Sphinx as if he understands everything that happens and feels the mental state of a person.

Sphynx cats have a large number of folds on your body, the more folds it has the cat, the better for him because it means that he was able to obtain from their ancestors all the right genes. But if the folds on the body of the cat is absent, or quite small, it suggests that the individual is considered to be defective by the breed.

The velvety skin of the Sphynx, which you can compare on sensations touching the surface of the suede. More common colors are considered piebald and white color.

This breed are the following types of colors:

The nature of the canadian Sphynx 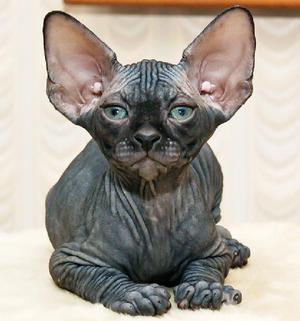 An important feature of these animals is that after a long dialogue with them becomes understandable – these characters have a feline character. Their affection is expressed in a peaceful mood, good humor, and absolutely adequate with respect to other animals living in the same area. These cats are absolutely not afraid of dogs, but rather show them curiosity and tries to know them. As well as many breeders and people who have experience with animals confirm that the canadian cats are untrainable. This fact once again confirms their intelligence and mental abilities.

It is important to note, despite the fact that Sphynx is perceived simply as a pet, they are excellent teachers and can easily influence the formation of personality in young children. The sphinxes are absolutely incapable of jealousy towards other animals or children. These cats are very patient, attentive and able to endure all the antics of kids.

Sphynx, like many other cats, despite the fact that are good for all family members, choose a single host, which spend most of their free time. In addition, it is found that there are some among the regular guests of the Sphinx can also choose your favorite while it’s hard to say what is the basis of their choice.

To ruffle or annoy a canadian is very difficult, because they are incredibly peaceful and friendly, tranquility to be envied, because of this they are willing to surround family members with love and gently caress.

People who don’t like sphinxes, I can say that they are aggressive creatures, but this is absolutely not true, but such conclusions can only be based on a visual representation of these animals. But often such people after one hour spending with these wonderful creatures knew that was wrong. 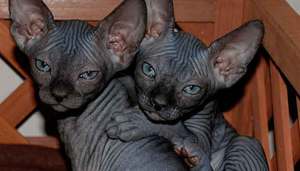 Sphynx do not bite and rarely scratch, you can do that only in the game. To influence the psyche of cats can only be a life in constant stress conditions that irritate the psyche of the animal. If the cat and the cat of this breed constantly exposed to violence, have triggered a natural instinct, and they begin to use their claws and teeth as a tool of protection. The cats understand perfectly when you play with them, and when trying to hurt them severely or treat them.

In the character of the Canadians laid only a good-natured quality, and they don’t know what revenge or harm, they absolutely never offensive, even after punishment. The representatives of this breed is the hardest to give a long stay alone, so before leaving, do not leave them alone in a locked apartment, and it is best to temporarily relocate the animal to friends or relatives. It is worth noting that the Canadians are very artistic animals, so specimens are often invited to various shooting photo or movie.

Among the varieties of this breed can occur following diseases: