One of the most widespread and harmful creatures, and poisonous life cats, are so-called ectoparasites, which may include, for example, ticks and fleas. 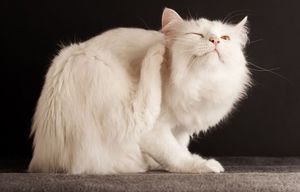 The pharmaceuticals market is ready to provide the owner of a large number of different drugs to protect from these pests. Widely known found drugs against parasites in the form of drops.

Many of these drugs have efficacy and prolonged action, easy to use, can be used as a combined tool against fleas and ticks.

A large part of the drugs against harmful insects for cats is an insecticide or a mixture thereof. As a rule, an active substance they have used components, such as , Imidacloprid, amitraz, diazinon, pyriproxifen , etc. They act by causing paralysis and subsequent death of the pests, and prevent the development of eggs and larvae of insects. Some of these poisons, and deter pests with its odor, and because they can be used as repellents.

In General, all medicines from insects cats technically are as follows: 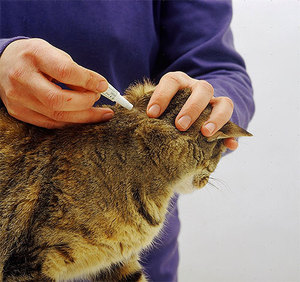 The substances applied vary in duration of action. The duration of the antiparasitic effect of the drugs in the first place depends on the type of active substance.

So, drops against ticks for cats “Stronghold”, “Frontline Spot On” protect your pet for 21-28 days and are mild remedies. At the same time, substances on the basis of fipronil and permethrin (for example, “Works”) shall remain in effect for 2 months. In General, the higher the degree and duration of efficacy have drugs with two or more insecticides, used as active substance. Such funds, in addition, have a combined effect, i.e. prevent the cat from several types of pests.

Requirements for drops from fleas and ticks

When you purchase drops from fleas for cats, the owner need to focus on the instructions for use.

The drug must meet the requirements of modern standards:

Cat owners are available with a range of domestic and imported products to protect your family pet from fleas and ticks. The most effective among them are the following:

Universal drug for the destruction of flea beetles and mites on cats are there. On the choice of drugs is influenced by the individual characteristics of the pet, the degree of damage, the conditions of detention of the animal, the presence of the propensity to allergies. Therefore, before starting treatment you need to consult a vet specialist that will help to determine which tool is best suited four-legged pet.

Side effects and unexpected situations when applied drops

In the first hours after treatment cat drops from parasites animal, as a rule, begin to itch. This is due to the fact that during contact with the poison fleas and ticks are developing increased activity and stronger bite pet. Approximately 18-24 hours after applying the medication starts mass mortality of the pests, and the animal comes to rest. Sometimes the cat due to fleas developing dermatitis, and in this case, the animal will itch a little longer until you heal the damage done by the parasites.

Sometimes the cat licks off the body drops immediately after application. In this situation also it is not necessary to go into a panic, as modern drip protection from parasites based on harmless to Pets substances like permethrin and fipronil. These elements are rapidly broken down in the stomach, not being soaked up in walls of internal organs and without getting into the blood. 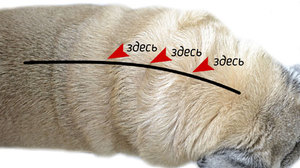 Sometimes some individuals have found idiosyncrasy of a drug. In this case, the cat manifest the main symptoms of poisoning: nausea, vomiting, increased salivation, etc.

Animal need as quickly as possible to wash without shampoo, give water and activated charcoal and take him to the vet to identify a more accurate diagnosis and determining treatment. In order to avoid such force majeure should be applied flea drop on the withers, where the cat will not be able to get them.