Among wild animals there are some that are quite amenable to domestication. What success do some fans home exotic. Has long been commonplace to have pet squirrels, Minks, weasels, raccoons, and others, it would seem quite unsuitable for the home environment animals. Among cat most susceptible to domestication of cheetahs and caracals.

The nature of these predators are found in African deserts, in Asia and the Caspian sea coast. There are Turkmen Caracal and Indian. In Russia small population of steppe lynxes there are in Dagestan. The word “Caracal” in Turkish means “black ear”. They live in burrows or in the crevices of the rocks and are primarily nocturnal. Cats-caracals are excellent swimmers and, unlike their relatives of domestic cats are completely not afraid of water.

Unfortunately, the population of caracals is gradually disappearing. Blame the gradual advance of civilization. In countries where these graceful cats, the person actively takes away space from the animals. Save caracals from extinction with the help of the reserves, and many of them are kept in zoos worldwide.

Once in captivity, caracals are easily tamed and smooth and domashniaya. If you take a kitten from the cattery, no difficulties arise at all. Behave these wild cats are peculiar. Their behavior differs from ordinary domestic cats, but then, they are wild animals.

The appearance and character of

Steppe lynx, otherwise called the Caracal, is of several types, but the differences between them are minimal. Non Zoological knowledge to recognize the species is unlikely to be able.

The wild cat lives about 15 years, but in home conditions, life expectancy increases slightly. Tamed Caracal becomes a devotee becomes calm and balanced character. The owners of these animals say their easy trainability and kindness to people. Caracals are extremely curious and playful. This wild cat will not be lying on the couch, half of his time he spends in a noisy active games.

It tells the story of a cat caracals accustomed people before. In ancient times, they could replace the hunter dog while hunting. They are perfectly able to hunt hare, pheasant and even small antelopes. In India, domesticated lynx named “Cheetah for the poor”, as unlike the rich, the poor hunters used the services of a Caracal, not a Cheetah. To date, the hunting abilities of steppe lynx people do not use.

How to choose a kitten

Price it large enough and to decide on the acquisition of the steppe small lynx, maybe not everyone. Try to acquire future pet enclosure, and more domesticated. Now many people are engaged in cultivation of steppe lynx. Kittens that are accustomed to human hands would have a better feel to you than a captive.

Inspect the kitten. He must be healthy shiny coat and skin without wounds and peeling. Eyes healthy kitten should not be sour, and ears to smell unpleasant odors. 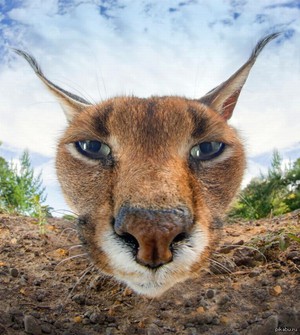 Acquire a kitten at six months of age. Just need to decide on further action. If you are not going to breed caracals, kitten immediately castrated. Otherwise, given its size, sexually Mature male will turn your home into a malodorous barn. Castronova male, you are depriving it also of the aggression inherent in all predators.

Be careful if you have children. Having a Caracal, when the family of a young child, unwise. Older children should explain that to hurt and pull home lynx unsafe.

Make all the necessary vaccinations. Care is no different from caring for other Pets. And you should also comb the Caracal fur during molting, clean ears and wipe eyes as needed. Sheds Caracal all twelve months of the year. Particularly noticeable this process in the summer. Purchase a silicone brush or mitten and spend it on the body of the animal. Claws periodically cut it with tweezers.

That won’t be a problem, so it is with swimming. Cats like caracals water treatments, in the wild this is excellent swimmers.

The diet of Caracal:

To feed the animal twice a day, so he will be constantly a good appetite. Meat will take about 0.4 kg per day. Uneaten food removed immediately. Occasionally your pet arrange fasting days, but not more than one day in two weeks. 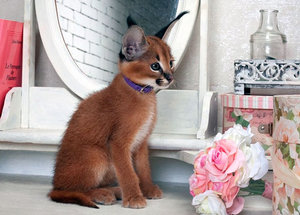 Caracals need to walk. It is an active animal, which is closely in a city apartment. For security ensure a comfortable leash and try to walk your predator away from dogs, because fearless Caracal and tries to engage them in a fight. If you live in a private home, make his enclosure, where he could freely run and jump.

Purchase for them rubber toys and scratching posts. If it is a private house, then put in the aviary beam. He will climb on it and sharpen its claws.

The Caracal quickly gets used to the leash and unlike pet cats happy paces next to the host. Get him a flea collar.

Also quickly learns the home of the lynx and the toilet pan. Pour it in the wood filler and put in a far quiet place, away from the doors. Tray clean every day.

The health of feral cats, as a rule, excellent, with a strong immune system and the problems they have can only begin with improper care and inadequate nutrition. The rest of the young caracals till the old age diseases does not occur. Sufficient to carry out timely vaccinations and checkups at the vet.

The first vaccination doing in three months, and a month later carried out a booster. Be sure to Caracal vaccinated against rabies, rhinotracheitis, parklakimidi and kalitsiviroza. Every six months is recommended a checkup at the vet.

If you are going to breed caracals, keep in mind that during mating season, their behavior becomes aggressive and unpredictable.

The female Caracal usually 2-3 cubs are born, in rare cases, their number may reach six. They develop more slowly than house cats. For example, the eyes have opened only a week after the birth, and from ten days of age the kittens are learning to walk. The female feeds the young with milk for six months. The meat can begin to give kids after 50 days from the day of birth.

The price of kittens Caracal is not small. So, one kitten can be purchased for 400 thousand rubles. Try to buy kittens at six months of age and proven breeders. In this case, the kitten will already be accustomed to a tray and solid food. In addition, he will have already made all the necessary vaccinations.

In short, the fear of these predators is not necessary. Be sufficient precautions when handling them, especially children. Caracals – big affectionate cats are more playful and active than their lazy counterparts. This pet for active people who do not tolerate the monotony, even in choosing a pet.